12. PRG LEA in the Frankfurter Festhalle

The PRG LEA (Live Entertainment Award) is the official opening event of Prolight + Sound and Musikmesse 2017. Outstanding achievements of the event industry will be honoured at a high-grade gala evening in the ‘Festhalle Frankfurt’. This event is unparalleled in Europe and the almost 1,400 invited guests represent a cross section of the event industry. In 14 categories, concert promoters, agencies, artists’ managers and venue operators, in some cases with the stage artists, will be honoured for successful tours, shows, festivals and individual events and outstandingly managed locations.

For the first time a TV live broadcast of a Bundesliga football match was produced entirely in the format UHD-HDR (Four more tests are scheduled between now and the end of the current football season). TVN MOBILE PRODUCTION produced the match Borussia Mönchengladbach – RB Leipzig using new Sony switcher and HDR converter technology and a unique new HDR / SDR workflow. The match was produced in HD and UHD and also in HDR (High Dynamic Range). This was made possible by an HDR / SDR (Standard Dynamic Range) workflow specially developed for the production with one OBVan. The whole scenario was based on a hybrid production concept, where the HD workflow was never affected by the UHD signal. 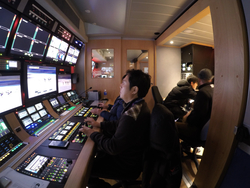 Broadcast Solutions GmbH, one of Germany's leading system integrators, has provided three Leader LV5490 4K test instruments for a new outside broadcast production truck built at its headquarters in Bingen am Rhein. The project was commissioned by South Korean's national television and radio network, SBS, which is based in Seoul. Believed to be the world's first 12G-SDI single-link production vehicle, the SBS UHD1 employs the two-sample interleave UHD standard and accommodates up to 12 4K/UHD cameras. It also offers 3G-SDI quad link monitoring gateways. "South Korea was a very early adopter of UHD TV," comments Broadcast Solutions CTO Rainer Kampe. "This new truck, UHD1, is based on the Alphaline variant of our Streamline OB vehicle family. It is designed for use by up to 17 operating staff. Alphaline comes with special workplace design, room concept and reduced length in order to cope with the special conditions of South Korean roads."

NEP, Broadcast Solutions and LIVE disclosed a strategic deal aimed at providing to the regions new flagship broadcast technology solutions. The aim of this venture is to elevate the Broadcast quality and content output of local and regional projects. The parties officially signed the contract at LIVE stand at CabSat in Dubai. 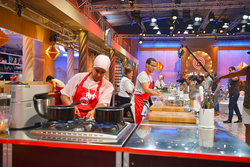 Robe Turns Down the Heat for MasterChef Algeria

French lighting designer David Seligmann-Forest of Paris based Lite4Life chose ten Robe DL4S LED profiles to be right at the heart of his lighting rig for MasterChef Algeria, which was recorded in a new purpose-built studio and former envelope factory in El Hamis, a suburb of the bustling, vibrant capital of Algiers. David was working as both LD and Director of Photography for broadcaster the Allégorie Group who produced 8 episodes of the series plus the finale, which was a huge hit with the public. He is one of France’s leading TV lighting specialists and has also worked on the French version of the series, which a few years back gave him the initial opportunity to use the first generation of Robe’s then DLS units.

ALTV, one of the fastest growing free streaming services recently launched in the Middle East and North Africa, is breaking new ground in the Egyptian broadcast arena with the success of the region’s first ever user-generated current events show. ALTV’s mission to turn viewers from across the MENA into digital content creators has led to the creation of Egypt’s most popular show on trending topics. The daily show, Lel Share3 Weghet Nazar, the Arabic transliteration of “Street’s Point of View”, prompts people on the street to share their views on the day’s trending topics at home and abroad. 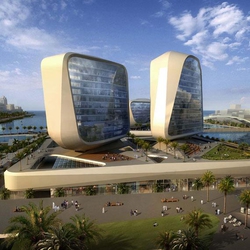 Imagine Communications, empowering the media and entertainment industry through transformative innovation, has successfully implemented a business continuity playout site, with full premium channel functionality, for Abu Dhabi Media (ADM). The disaster recovery solution uses Imagine Communications’ playout, automation and other software products running on du’s Media Cloud platform. du is one of the leading ICT service providers in the United Arab Emirates. In addition to providing ADM with a cost-efficient and fully functional disaster recovery facility, the cloud-based deployment has prompted the media company to revitalize its premises-based playout operations to match the performance and flexibility of the new cloud-based facilities. 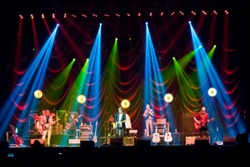 Lighting designer Al Paquette was looking for some new and exciting fixtures to incorporate into his design for the current “1000 Arms” tour by Canadian country rockers Blue Rodeo ... and chose Robe Spiiders and PATT 2013s which were newly purchased by lighting vendor Apex Sound & Light from Ontario, Canada. Al has worked with the popular band for the last six years, and this is the fourth full production tour he's done with them ... for which he created a totally original look and design. He knows what they are comfortable with onstage, "it's about setting the right mood and environment for the music," he explained. 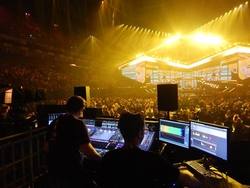 The Brit Awards is one of the UK music industry’s most prestigious events and was broadcast live to around 5.4 million viewers on British television channel ITV1 alone this February. An event this important necessitates an audio system that can handle a complicated set up, with a quick turnaround for performers and presenters, and one that gives total reliability. This exacting task was once again undertaken by Britannia Row Productions. For the last three years, they have deployed DiGiCo digital mixing consoles as part of their set up, but this year, they relied solely on the British manufacturer to provide the faultless control they required. 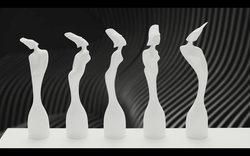 Sennheiser in RF Control at BRITS 2017

It was another evening of glitz and glamour at the 2017 Brit Awards, which once again took place at London’s The 02 on the 22nd February. Sennheiser was proud to support the production of the event for the 15th year in a row, with its Artist Relations team providing several racks of wireless microphone and IEM equipment, and engineer Andrew Lillywhite assisting with RF co-ordination expertise. Andrew and Sennheiser’s artist relation manager Jack Drury were on site at The O2 for the run up on the Monday, Tuesday and on show day, working alongside Britannia Row Productions who took responsibility for the overall audio production of the event and Joshua Thomas who was in overall charge of RF co-ordination. 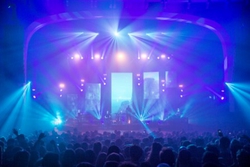 Colour Sound Experiment supplied a lighting and video floor package for the latest run of live shows by talented music producer Bonobo (Simon Green), with a brand new lighting look for the stage designed by Will Thomas. The tour is in support of Bonobo’s recent UK Top 5 album, “Migration”, released in January on independent label Ninja Tune Records. Will Thomas has previously worked on Bonobo’s extensive “Black Sands” and ‘The North Borders” tours, which culminated at the end of 2014 with a sellout show at London’s Alexandra Palace. Will has produced an energising and refreshing show to match the vibe of the music of “Migration” and its transitory themes. A major starting point for this was the visual material commissioned by Bonobo and produced by Strangeloop from LA, who also created the screen design which brought an architectural presence to the stage. 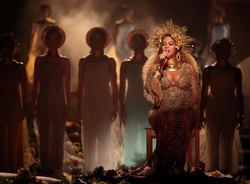 The ceremony, which is produced by NARAS & AEG Ehrlich Ventures LLC, recognizes the best recordings, compositions and artists, and took place within a lighting design undertaken by locally-based Full Flood Inc, a collective of award-winning LD’s. TV lighting designers were Robert Dickinson and Noah Mitz. Inventory was supplied by PRG’s Los Angeles office and included vast quantities of GLP’s new generation fixtures including X4 atoms and X4 Bar 20’s. These were used in performances by both Bruno Mars and Beyoncé. Full Flood also specified 20 pieces of impression X1 into custom ‘beacon’ housings designed by lighting director Mike Berger for the performance by A Tribe Called Quest.

It’s become an anticipated event: each year, “All Things Considered” hosts a well-known musical group in-studio, which plays live-to-air from the popular morning news program’s home studios in NPR’s Washington, D.C. headquarters. But this year’s guest performers were bigger than most which have graced that facility: on February 27th, 2017, the 70-plus members of the U.S. capitol’s National Symphony Orchestra entered NPR Studio 1 to perform the show’s instrumental interludes, featuring pieces from Mozart and Elgar, among others. 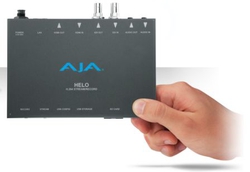 From Reggae on the River to the Enchanted Forest Gathering, live streaming has become a new norm on the music festival circuit, opening up doors for Humboldt, CA-based video production company Media Apex Productions whose sweet spot is multi-camera live production. With a full project slate planned for the year spanning music festivals and other events that require live streams and archives, the company recently updated its workflow with an AJA HELO for H.264 streaming and recording. “Before HELO, I relied on a bunch of different applications, including a dedicated laptop just for archiving. HELO brings streaming, recording and archiving into one small box, which has been unheard of until now,” shared Media Apex Director, Chris Smith. “All I have to do is plug it in and I’m in business.” 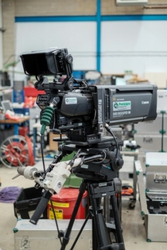 Presteigne Broadcast Hire today announced that is has taken delivery of more than £2M in new broadcast technology from Sony, Canon, Blackmagic, Vinten and others to further strengthen its dry hire stock inventories with the latest technologies. As 4K/UHD continues to gain acceptance, Presteigne can meet the mounting number of requests for 4K camera and associated lenses with its investment in new Sony HDC-4300 cameras, which utilise ultra-high-precision alignment technology to realise three 2/3-inch 4K image sensors. A broad range of Canon 4K studio, field, ENG and telephoto lenses were also acquired to ensure pristine 4K acquisition in any application.

Sony is expanding the HDR capabilities of many of its professional products, to meet the growing requirements for HDR content across all production genres. The new enhancements deliver HD HDR Live broadcasting and Instant HDR workflow in products ranging from live camera systems, servers, monitors and camcorders, via updates to software or firmware. High Dynamic Range adds increased realism to moving images and creates a significantly more immersive viewing experience. Broadcasters, live event producers and online content creators all have specific HDR production requirements, and the expansion of Sony HDR production capabilities, this offers a wide range of benefits.