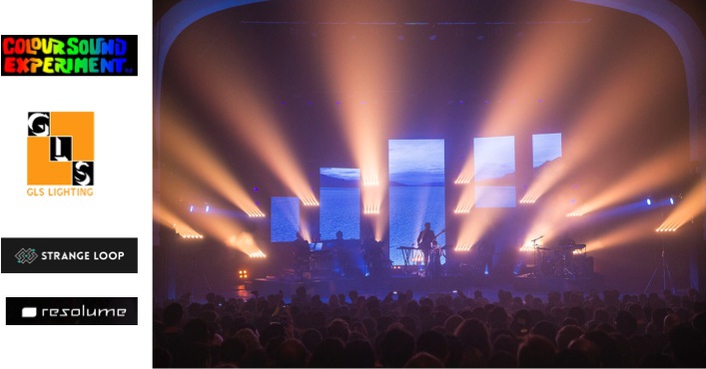 Colour Sound Experiment supplied a lighting and video floor package for the latest run of live shows by talented music producer Bonobo (Simon Green), with a brand new lighting look for the stage designed by Will Thomas.

The tour is in support of Bonobo’s recent UK Top 5 album, “Migration”, released in January on independent label Ninja Tune Records. Will Thomas has previously worked on Bonobo’s extensive “Black Sands” and ‘The North Borders” tours, which culminated at the end of 2014 with a sellout show at London’s Alexandra Palace. Will has produced an energising and refreshing show to match the vibe of the music of “Migration” and its transitory themes. A major starting point for this was the visual material commissioned by Bonobo and produced by Strangeloop from LA, who also created the screen design which brought an architectural presence to the stage. 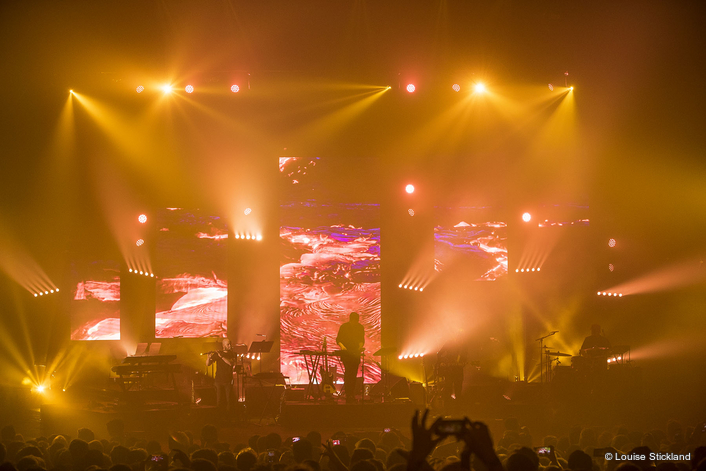 It was largely left to the ingenuity of Will and technician / rigger James Hind – with support from others at Colour Sound - to produce a safe ground-supported solution to position the asymmetric screens - the tallest being 5.5 metres high - in exactly the right places. They needed to have enough latitude to be scalable and accommodate the rig in different sized venues, and practical enough to be toured around the world and looked after by just the two of them! In addition, Will’s other core creative considerations were simple and yet complex… the notion of dark and light, the contrasts, the interplay, the space and the emotion that inhabits both these atmospheric variations.

Enjoying a great working relationship with Colour Sound, Will and James started building structures in the warehouse and experimenting with different ideas for five individually supported LED screens. 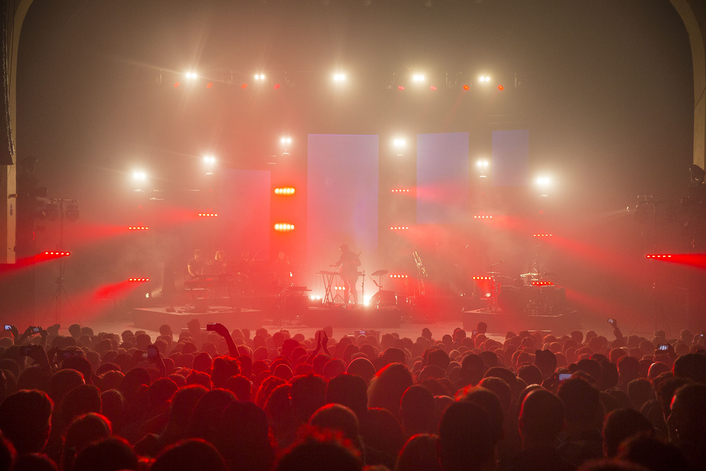 The route they chose utilised six Guil Engineering UKL 800 XL tower lifts which were rigged with assorted trussing pieces to which the screens were then attached. These lifts are like a modern version of the classic rock ‘n’ roll Genie superlift... and were supplied, brand spanking new, by Neg Earth. The screen was Colour Sound’s proprietary BT-6 LED, and the centre of the five screens was supported by two lifts.

Lighting had to fit in between the screens and not impose on the shape, so Will’s design was based on six vertical Litec QX30 towers, hinged for quick erection, standing on X-Bases. The centre pair were 4.5 metres high, the next were 4 metres and the outside pair were 3.5 metres, with the lights sitting a little bit higher when attached.

The luminaires all travelled in meat racks on lamp bars so four or six fixtures could be rigged at a time, which also helped the workflow. The workhorse fixtures of the design – programmed to maximise the stage space and enhance the idea of shape and form – were Chauvet Rogue R2 LED washes.

Will likes these for their excellent colours - all important as he needed to match lighting to the video – together with the straightforward zone control and the shape of the beams. 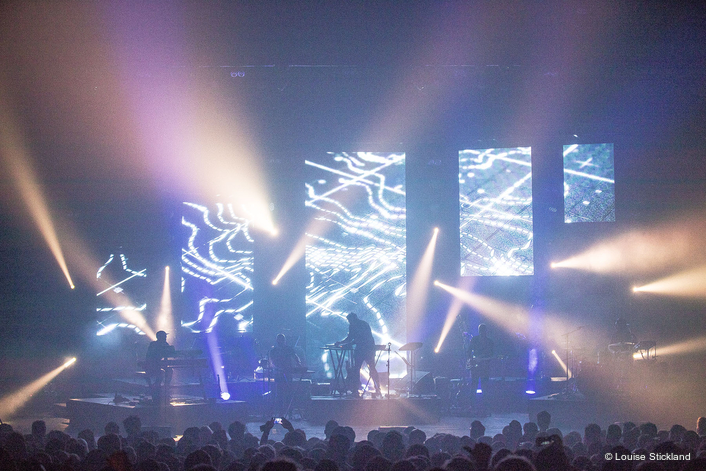 Of 21 x R2s in total, two were rigged to each tower, complimented by five on the floor and two a side on Manfrotto stands downstage, used for all the keying and maintaining an essential subtlety to the lighting.

Also on the towers was a 2-cell blinder, with another 6 on the floor, then six Robe Pointes positioned upstage on the deck for effects and aerial work.

Spread around the towers and on the side Manfrotto stands were 19 Chauvet Rogue 1 FX-Bs – newly purchased by Colour Sound. A highly versatile little ‘disco twizzler’, this features  5 x LED heads with global pan and individual tilt which are fantastic for creating curtains of colour and wave effects as well as dynamic aerial beams.

Will initially used eight for a Warehouse Project gig in Manchester and was hugely impressed with the results. “There are all sorts of effects plus inbuilt macros that can be integrated into a show like this,” he comments. They were rigged vertically for this show to maximise the pan-and-tilt.

There was no front truss, so the architecture and space at each venue was more prominent and particularly apparent at Brixton Academy and Manchester Apollo. 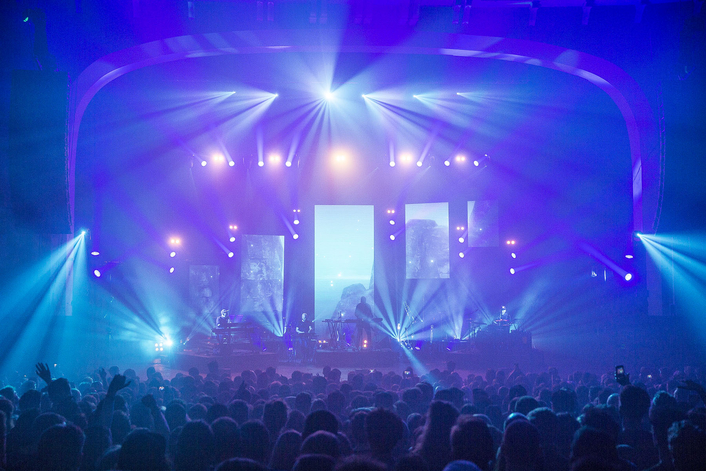 Will ran lighting from a ChamSys MQ500 console – one of two also newly purchased by Colour Sound - which he thinks is “excellent”.

The video was run via a Resolume system side-stage, which fed it straight to the screens, but Will had control over the intensity via ArtNet.

Because of the visuals and the screen design, it was important that the lighting was slick, streamlined and complimentary, but within that he could find plenty of darker, edgier and more interesting moments that journeyed everyone to a heavier clubby vibe.

“Basically it’s a dance show, and people want to do just that – sometimes they appreciate that it’s dark and other times they want to be in the light”.

The general ‘top’ lighting rig for the two largest gigs on this section of the tour - Brixton and Manchester Apollo - was provided by GLS.

Commenting generally on working with Colour Sound, Will comments says, “They are an excellent company with great people. Having space in the warehouse to set up and experiment – as well as great feedback from others around – was invaluable to getting this working smoothly on the road”.

Will is the first to admit that behind every good lighting designer there is an excellent stage tech which is especially important on tour like this where there is just one tech and one LD!

With every venue and stage being radically different, the tech has to be adaptable, knowledgeable, a great communicator and generally excellent at their job ... “otherwise I would not be able to spend half the time I do at front of house designing and programming,” he states.

“They have to have the concept of the show foremost in their thoughts, and when a change has to be made, they will know what is right for the show without having to defer to the lighting designer all the time! Without James’s calmness, interpersonal and technical skills, I wouldn’t be able to do my job so efficiently”.

Next, they head to America for two months, which will include a massive show at the iconic Red Rocks amphitheatre in Denver. Then it’s straight into European summer festivals, plus an Australian tour with a quick stop in Japan for Fuji Rock, complete with a re-designed rig. After the summer, Bonobo returns to Europe playing larger venues, and then it’s back to the U.S. … so there’s a full-on year ahead! 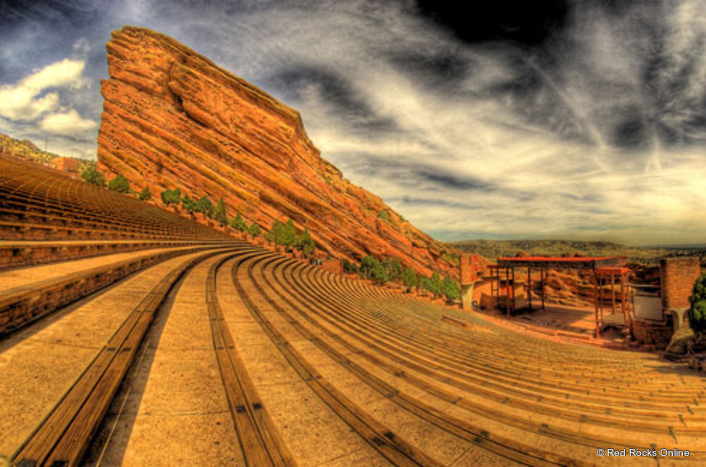