“Tomorrow the birds will sing.”

Sure,  the new iPhone may look sexier than that iPhone 3 you have in your desk drawer, but does it make better calls, deliver text messages faster, grab your emails or let you get to your favorite website any better? Last year, the U.S. auto industry reported record sales and now they’re pushing all the new self-driving, self-parking, self-serving technologies; but is all that going to make a difference?  The average car on the road is still 10 years old. It’s paid for, gets you from point A to point B (and back) and a regular mechanic can work on it for you. Recent Edmunds and Nielsen reports found the connected generations were less interested in having a car than their parents.  They’d rather focus on minor things like home loan payments/rent, healthcare, food, utilities, taxes, family vacations and dinner out now and then. Does the new integrated audio system give me better sound or what I need to relax and withdraw? Some “old technology” just can’t be replaced by advanced digital manipulation. When the record is finished and the book has been read, I’ll be ready to attack the next day knowing The Tramp was right, “Tomorrow the birds will sing.”

A team of FUJINON technical-engineers will be at the tournament to provide onsite technical support for the entire duration of the event. FUJINON provides this one of a kind service to all of its clients at major sports and entertainment events around the Globe. Broadcasters, Production companies and Freelancers can contact the Technical Service Centre during the whole turnament.

Piksel has successfully streamed Howard University’s 2016 Commencement ceremonies across the internet — including an address by President Barack Obama. The live video stream was watched by more than 22,000 unique viewers, spanning 81 countries around the world. In addition, the White House shared the address on YouTube where it has been replayed more than 275,000 times. The event was monitored in real time by expert staff both on-site at Howard University, as well as at Piksel’s Live Streaming and Monitoring Center in Atlanta, GA, where technicians monitor over 40,000 live event broadcasts per year. 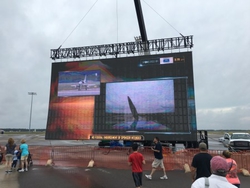 120,000 Tampa Bay residents who assembled at MacDill Air Force Base earlier this year for AirFest 2016, one of the world’s largest air shows, received a front row seat to all the action on the ground and in the sky. For the first time, attendees could view everything from military aircraft displays to aerial performances on large-scale video walls featuring real-time footage interlaced with graphics detailing pilot bios, aircraft profiles, attendee tweets and more. Taking advantage of a graphics and AV workflow developed by Reality Check Systems (RCS) and OSA Media Solutions, AirFest pulled off the largest-scale live production and stream in air show history. 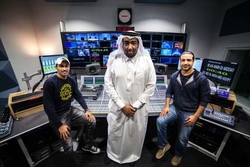 In what has been the largest broadcast project for Sennheiser in the Middle East, Al Jazeera, the Doha-based broadcast giant, has utilized cutting-edge wireless microphone and in-ear monitoring systems at its studios in Qatar. The deployment enables Al Jazeera to deliver crystal clear audio for its viewers and will now serve as the standard template for all the broadcaster‘s major studios across the globe including those in London, Washington DC and the Balkans. A highlight of the project was the use of Sennheiser's flagship Digital 9000, an all-digital wireless system that can transmit completely uncompressed audio, artifact-free and with superb dynamics. 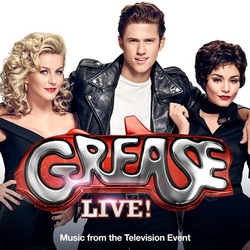 Sennheiser wireless technology was recently employed in the production of FOX’s smash hit live television musical Grease Live!. The production, which played to a live TV audience of over 12 million, incorporated 14 sets spread over 20 acres — and required over 50 channels of crystal-clear, reliable wireless sound. Audio supervisor and designer Bruce Arledge oversaw the demanding production, which was staged at Warner Brothers Studios in Burbank, California. Arledge and his team turned to Sennheiser transmitters and receivers to deliver flawless wireless audio from the principal performers, which included Vanessa Hudgens, Aaron Tveit, and Jessie J. 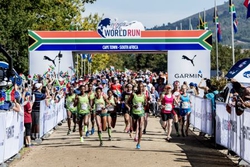 Held on May 8, 2016, the third annual Wings for Life World Run was the biggest and most emotional yet. Global Champions Kaori Yoshida of Japan and Giorgio Calcaterra of Italy smashed course records, with women’s titleholder Yoshida running 65.71km before being passed by the Catcher Car finish line, and Calcaterra pushing to 88.44km to top the men’s field. In all, people of 203 nationalities signed up for the race; with an unprecedented number of registered participants – 130,732 across 34 official race locations, plus 20,556 confirmed Selfie Runners – as well as sponsors and other donors, raising 6.6 million euros for spinal cord injury research. 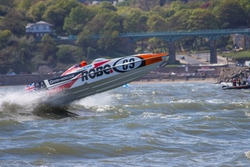 Robe continues its ‘Working with Winners’ initiative through 2016, sponsoring the Quantum Racing team and their boat ‘Quantum’ for the 2016 P1 UK SuperStock powerboat racing championship – among the world’s most exciting and action-packed international marine watersports. Quantum P1 pilot-navigators Vin Burdock and John Donnelly also currently hold the National and World Water Speed Records for the Panther P1 race boat class – established last year at Coniston Water in Cumbria during Records Week. They smashed the previous record set in 2013 - and were awarded a silver star from the RYA Powerboat division.

Mizzou Athletics brings its 'A' game with Calrec

A brand-new Calrec Summa console is driving professional broadcast-quality sound for the University of Missouri Athletics department (Mizzou Athletics). The Summa anchors a major upgrade of the Mizzou Arena broadcast centre to support ESPNU and SEC Network productions. The Summa equips Mizzou Athletics to meet the audio requirements of linear television and the demands of network producers and directors. The desk is housed in a new stand-alone audio room that can handle full basketball productions for the TV networks and complete shows for the arena's in-house video boards, all at the same time. Mizzou Athletics operators can call on an abundance of auxes and tracks to send signals wherever they need to go quickly and easily, with just a couple of touches on the touch screen. 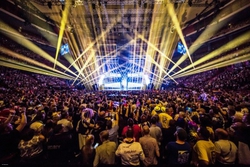 Now in its 61st year and themed ‘Come Together’, Eurovision was sponsored by OSRAM and hosted by last year’s victor Sweden at Stockholm’s Globe Arena and watched by millions around the world. Award-winning lighting designer Fredrik Jönsson applied a vast number of Clay Paky Mythos, Sharpy, Sharpy Wash 330 and brand new Scenius to create the broadcast-ready, glittering extravaganza that was the Eurovision Song Contest 2016. Jönsson, who was the lighting designer for Eurovision 2013 and created the visual look of Swedish winner Måns Zelmerlöf’s performance at last year’s contest, specified 120 Mythos, 308 Sharpys, 166 Sharpy Wash 330s and 58 Scenius to create each delegation’s uniquely spectacular visual story. 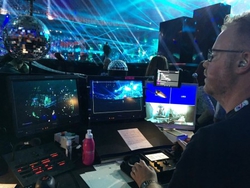 NEWTON gyro-stabilized camera heads helped capture live action from the stage at the Eurovision Song Contest 2016 for NEP Sweden and Rail & Tracking Systems (RTS). The NEWTON heads were used for the broadcast of the semi-finals and final of the competition, which ended on Saturday. Camera operators now have a compact, affordable stabilized head providing precise control of camera, lens, and gimbal movement by a single operator. “The NEWTON performed flawlessly for us during the Eurovision broadcasts,” said Daniel Hjalmarsson, an independent special cameras and remote head operator who worked one of the cameras in front of the stage. “Until now I haven’t been able to operate both the head and the movement of the tracking rig by myself.”

Eurovision Flex was successfully used at the Grand Final of the Eurovision Song Contest in Stockholm last Saturday. The Flex equipment was deployed at 26 EBU Members taking part in the Eurovision Song Contest to provide yet another network layer to the voting transmission infrastructure. Used in the Members’ control rooms, the Flex IP technology ensured that each participating Member was provided with maximum reliability by being connected to at least two independent networks: satellite, combined with the robust Eurovision FiNE network and/or public internet. Broadcasters were guaranteed delivery of live content over multiple networks in a fast, secure and reliable manner.

Ikegami Electronics Europe will demonstrate its latest television production and monitoring equipment on Wednesday June 8 at MMC Studios in Cologne. Main focus of the 10.00 to 17.00 event will be on the 8K Super Hi-Vision /4K UHD switchable SHK-810, the UHK-430 4K camera and the iHTR 4K Video Packetizing Optical Multiplex Fibre Transmission system. MMC Studios Cologne is located at Butzweilerstrasse 255, 50829 Cologne.  Car parking is available on site. MMC Studios Cologne is within short walking distance of the Sparkasse am Butzweilerhof metro station.

Visitors are requested to confirm if they would like to attend via: http://www.ikegami.de/#open-house 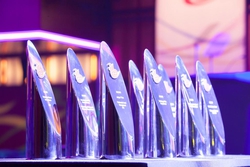 The shortlist for the IBC2016 Innovation Awards has been announced. The nine finalists are from six countries, as far apart as China and the USA. Each reflects the way that technological advances are boosting the creativity and efficiency of the content industry. That is what lies at the heart of the IBC Innovation Awards: the application of the latest technology in the real-world. This year this translates to making content more engaging for viewers, offering new functionality in delivery and discovery, and helping creators work more efficiently. 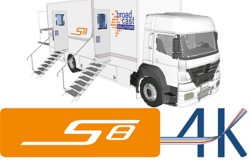 The OB Van ordered by NEP Switzerland is based on the Streamline Family and can handle productions with up to 10 4K/UHD cameras or 16 HD cameras respectively. The video system works with the Quad Link 2 Sample Interleave (2SI) standard. Delivery to customer NEP Switzerland is planned for beginning of July 2016. The new production tool will be used mainly for UHD productions for the football Swiss Super League. Since 2011 former Mediatec Switzerland, now NEP Switzerland, uses Streamline S12 OB Vans for producing the Swiss Super League. The OB Van for South Korean broadcaster SBS works with up to 12 4K/UHD cameras on the basis of 12G-SDI UHD Single Link in combination with Quad Link 3G-SDI as well as hybrid IP-systems. 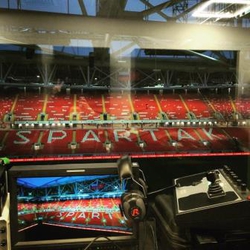 Robycam is ready for 4K Live!

Movicom successfully completed tests of the 4K version of a RobyCam 3D aerial cable system with a Sony PMW-F55 camera and Canon CINE-SERVO 17-120mm lens. 4K live signal from the camera has been transported through fiber-optic channel and delivered to the ground providing 4xBNC 4K output. Camera and lens controls were easily achieved thanks to RobyCam native support of the Sony RCP serial control protocol and Fujinon/Canon Cine Lenses drives protocols.