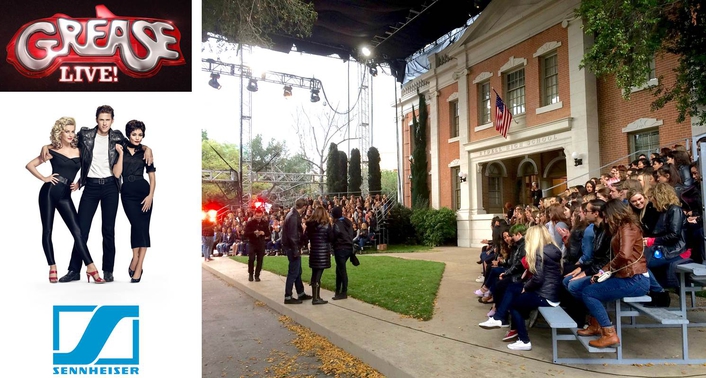 Sennheiser wireless technology was recently employed in the production of FOX’s smash hit live television musical Grease Live!. The production, which played to a live TV audience of over 12 million, incorporated 14 sets spread over 20 acres — and required over 50 channels of crystal-clear, reliable wireless sound. Audio supervisor and designer Bruce Arledge oversaw the demanding production, which was staged at Warner Brothers Studios in Burbank, California. Arledge and his team turned to Sennheiser transmitters and receivers to deliver flawless wireless audio from the principal performers, which included Vanessa Hudgens, Aaron Tveit, and Jessie J.

Uncharted RF Territory
“I have 25 years of experience as a lead on major awards shows and live television productions of all kinds, but this was unlike anything I’d worked on before,” recalls Arledge. He was brought in early on in the production to help design a system that could meet the show’s demanding sound needs. “This was a three-hour live show with music playback and the added complexity of moving between stages seamlessly,” he explains. “It entailed a hybrid situation with a high channel count across multiple locations.” Having used Sennheiser wireless technology extensively on other productions, he was already confident it could meet his needs for Grease Live!. “I exclusively use Sennheiser wireless gear on Dancing with the Stars, where I’m a production mixer, so I knew I could trust it to perform in a demanding context.”

Before making any final decisions, Arledge brought on Dave Bellamy of Soundtronics to help navigate the complexities of the wireless environment, which covered three stages and an exterior space. Arledge and Bellamy wanted to keep the logistics as simple as possible. “We wanted to mic up the talent and have them wear the same transmitters throughout the whole show,” says Arledge. “With multiple costume changes and hair changes I wanted to keep the signal flow to production mixer Mark King straightforward.” Bellamy recommended that Sennheiser wireless, combined with Soundtronics’ own proprietary antenna technology, were the tools to get the job done.

Outside-the-Box Wireless
“At the time of the RF survey, it was noted that there was only one TV channel that did not have DTV in it at some level at the Warner Brothers studio,” Bellamy says. “To facilitate the show we had to apply to the FCC for special licensing for other bands.” The versatility of Sennheiser transmitters enabled Bellamy to surpass these limitations and meet the 54 inputs the production required. Bellamy and Arledge decided on a combination of Sennheiser EM 3732-II receivers with SKM 5200 handheld transmitters, and Sennheiser EM 3532 receivers coupled with with SK 5212 bodypack transmitters. “The Sennheiser transmitters and receivers have the capability to be tuned to 960 MHz, so they were perfect for this application,” Bellamy says.

The Sennheiser equipment also gave Bellamy the clear, broadcast-ready audio and uninterrupted performance that he needed for all of the main talent in Grease Live!. “This was a zero tolerance show in terms of RF issues,” Bellamy says. “We needed reliability and Sennheiser gave us that.” All of the main talent was double miked with lavaliers for redundancy and improved pickup, so Arledge had to conceal two transmitters on each of the leads. “The Sennheiser transmitters are nice and compact so we tucked them into pouches sewn into the wardrobe or in some cases into the talents’ wigs,” he notes. 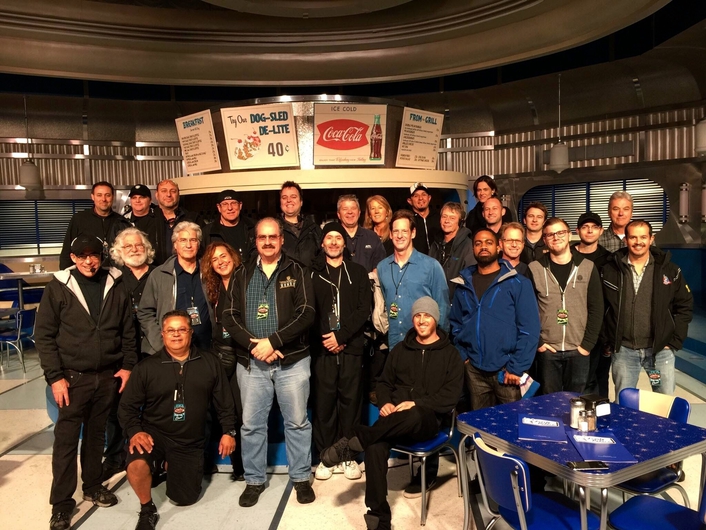 Jessie J Shines with Sennheiser
The broadcast got off to a strong start with Sennheiser artist Jessie J performing “Grease Is the Word.” Her vocals were captured and delivered by her trademark Sennheiser MD 5235 capsule and SKM 5200 handheld transmitter. “She loves that combination and it sounded great,” says Bellamy. Jessie J performed the song, which was written by Barry Gibb for the 1978 movie adaptation of Grease, as she traversed the backstage and outdoor areas of the set with clear, reliable audio. “It’s a perfect example of the challenges we were facing and success of the Sennheiser transmitters,” says Arledge. 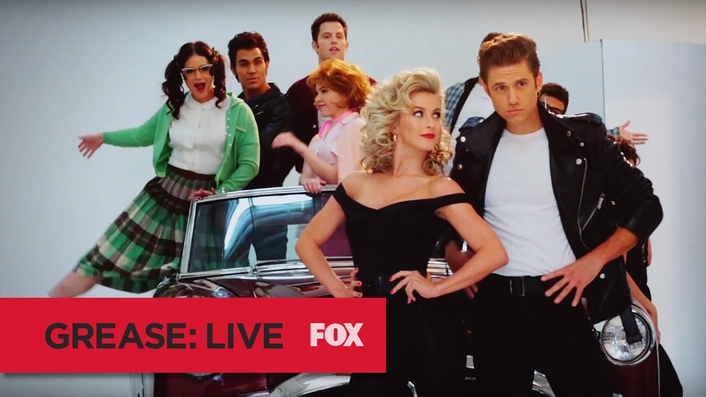 Unfettered Performance
Arledge was equally pleased with the performance of his Sennheiser gear throughout the rest of the show. “Grease Live! was like doing five shows at the same time,” he says. “For the last sequence of the show, the whole cast piles out of the back of Stage 36 and they drive all the way out to a carnival location a quarter of a mile away, on camera, singing live. And the audio was seamless.” Arledge feels that the confidence every member of the production had in their Sennheiser wireless systems helped make Grease Live! a memorable TV event. “The confidence that we had in Sennheiser not only allowed us to deliver pristine sound to our home audience, but it also allowed our actors to perform to the best of their ability,” Arledge says. “I wouldn’t go with anyone else.”