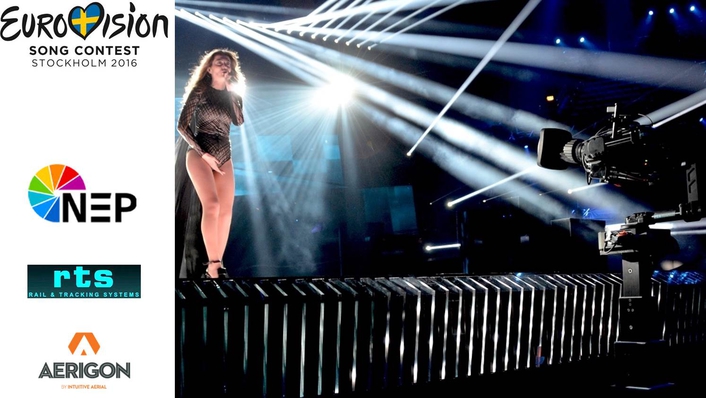 NEWTON gyro-stabilized camera heads helped capture live action from the stage at the Eurovision Song Contest 2016 for NEP Sweden and Rail & Tracking Systems (RTS). The NEWTON heads were used for the broadcast of the semi-finals and final of the competition, which ended on Saturday. Camera operators now have a compact, affordable stabilized head providing precise control of camera, lens, and gimbal movement by a single operator.

“The NEWTON performed flawlessly for us during the Eurovision broadcasts,” said Daniel Hjalmarsson, an independent special cameras and remote head operator who worked one of the cameras in front of the stage. “Until now I haven’t been able to operate both the head and the movement of the tracking rig by myself.” 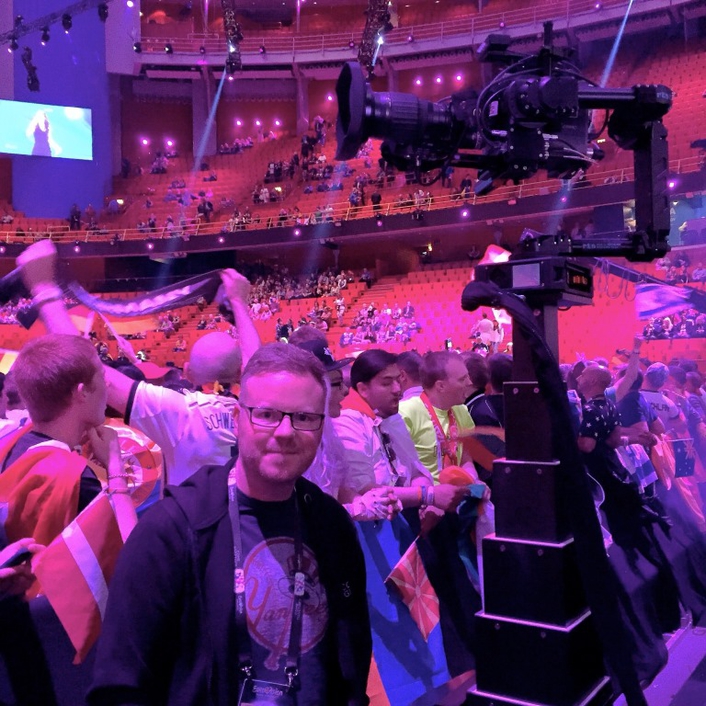 Daniel Hjalmarsson, an independent special cameras and remote head operator with the NEWTON at the ESC at Stockholm

Hjalmarsson used Intuitive Aerial’s DOMINION gimbal/camera controller to precisely operate the NEWTON head and Grass Valley LDX Compact camera and lens over an Ethernet connection. The DOMINION runs on CAN bus, which enables quick integration with third-party products. Intuitive Aerial programmed the controller so its joystick, in addition to being used for pan, tilt, and zoom, could be rotated to move the height adjustable tower up and down. Hjalmarsson moved the rig left and right along the 10-metre horizontal tracks with foot-operated controls. This ability of the DOMINION to be integrated with the equipment of other companies resulted in a streamlined operator experience and saved the production money by turning what is usually a two-person job into a one-man operation. 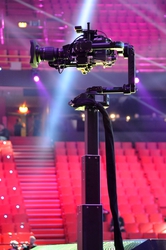 “The whole setup feels more professional with the NEWTON head,” Hjalmarsson said. “I could make even the smallest move by myself, which is much easier and quicker than having to communicate with an assistant.”

The Eurovision Song Contest, which was won this year by Ukraine and singer-songwriter Jamala, was viewed by over 200 million people around the world, including, for the first time, in the U.S. Prior to setting up for the broadcast, Hjalmarsson made a list of what he wanted in a stabilized camera head. Then, Intuitive Aerial ensured that the NEWTON and its DOMINION controller were integrated with the necessary third-party products.

“The NEWTON heads worked even better than we expected and we had no failures or problems at all during the three weeks,” said Axel Engström, project manager at NEP Sweden who chose the equipment to be used and was responsible to the Swedish host broadcaster, SVT. “The stabilization of the NEWTON meant we were able to shoot flawless footage.”

“With the NEWTON, I was able to zoom in much further than usual,” Hjalmarsson explained. “I could start with a head shot or half shot, then move out to the total stage, without any vibrations at all. Directors and others on the set who saw the system were really impressed.”

The NEWTON weighs only 15 lbs and can be mounted on 1D/2D/3D wire-cam systems, cranes, dollies, motorcycles and other vehicles, and any compact moving rig where weight and visual footprint need to be minimized. “While other gyro heads are large and obtrusive, the size of the NEWTON means I could hide it from the other cameras,” Hjalmarsson said. 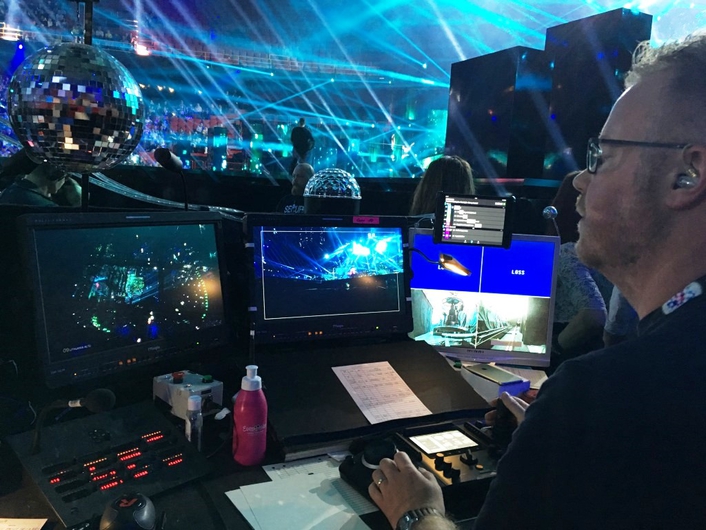 Hjalmarsson will be using the NEWTON again soon for a live broadcast of the Stockholm Marathon on June 4. “It was funny because one of the Swedish TV stations called to say they wanted to use the NEWTON for the Marathon and asked us if we knew anything about it,” he laughed. “They were delighted to hear that we were using it on Eurovision and that it had been such a success for us.”

Hjalmarsson, who has worked on the TV show Swedish Idol since 2004, hopes to be able to use the NEWTON on that show as well. “We’ve been looking for a head like this one. It costs too much to get a larger one. Now, with the NEWTON, we can afford it.” 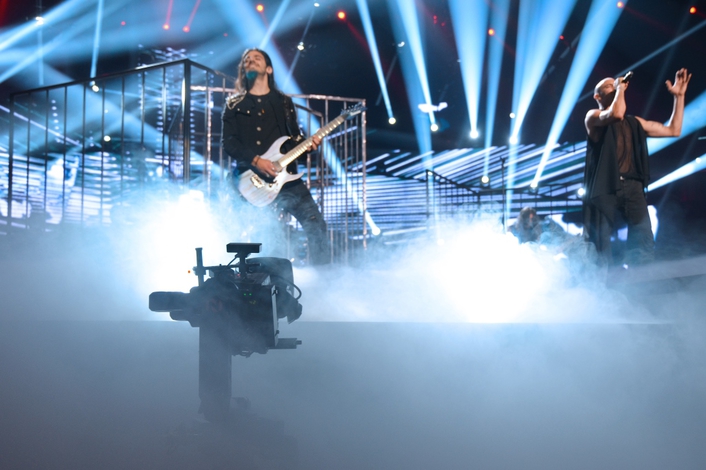 “We were thrilled to see the NEWTON pass its first major test on such a huge stage,” said Robin Kahlbom, CEO of Intuitive Aerial. “We’re glad to be able to integrate our technology with that of our third-party partners, providing operators with more compact, unobtrusive camera setups.”

About NEP
In March 2015 the Mediatec Broadcast Group was acquired by the NEP Group and is now a part of the NEP Worldwide Network. NEP provides the technology and know-how to enable clients to produce the worlds’ biggest live and broadcast events around the globe. The company is the leading worldwide provider of outsourced production solutions offering technical services for remote production, studio production, video display, host broadcasting, post production, smart asset/media management, multi-screen delivery and end-to-end OTT solutions. NEP’s team of more than 2,000 employees is driven by passion and a focus on technical innovation, and together they have supported productions in over 65 countries on all seven continents. Headquartered in the United States, NEP has offices in Canada, the United Kingdom, Ireland, the Netherlands, Sweden, Norway, Denmark, Germany, Finland, Switzerland, Belgium, the United Arab Emirates, and Australia. NEP Worldwide Network operates in fourteen different countries under three operating segments: NEP Broadcast Services, NEP Live Events, and NEP Creative Technology.

About Intuitive Aerial
Intuitive Aerial AB (publ) is a publicly traded company on NASDAQ OMX and based in Linköping, Sweden. It is an international manufacturer of professional remote camera systems for high-end cinema and broadcast applications. The company makes the AERIGON Mk II, the industry’s first remote piloted aerial camera platform (UAV) for professional cinema, broadcast, and commercials productions. AERIGON has been trusted to fly cameras for the feature films Spectre, Avengers: Age of Ultron, We Are Blood, and Into the Woods; the Taylor Swift music video, “Wildest Dreams”; and on broadcasts such as BBC’s nature doc series One Planet and Nat Geo Wild. It also manufactures NEWTON, a stabilized remote camera head for broadcast applications. Both remote camera systems are controlled by the Intuitive Aerial DOMINION gimbal/camera controller. The company provides certification assistance and flight training for its customers worldwide.