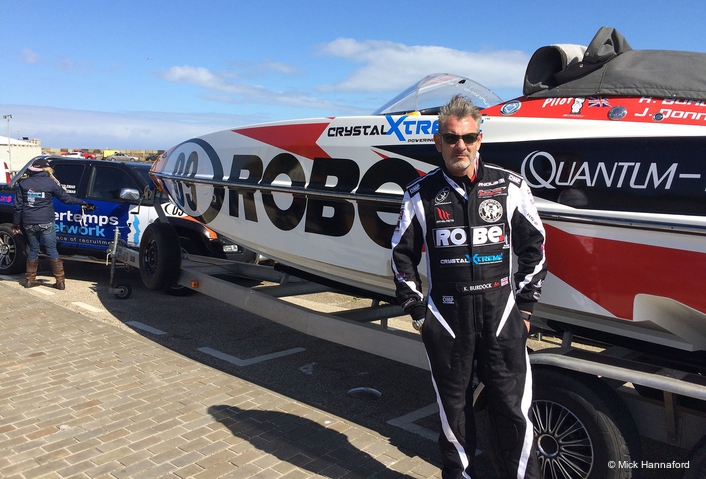 Vin & his boat Quantum preparing for the race

Robe continues its ‘Working with Winners’ initiative through 2016, sponsoring the Quantum Racing team and their boat ‘Quantum’ for the 2016 P1 UK SuperStock powerboat racing championship – among the world’s most exciting and action-packed international marine watersports.

With the first P1 UK Championship race of 2016 completed in Scarborough last weekend, despite the first day being cancelled due to bad weather, Vin & John’s fast and furious performance round the course for the two races on Sunday put them on the podium and currently sharing the championship lead!

The serendipitous meeting of Robe and Quantum Racing happened last year via an R ‘n’ D project, when Robe UK’s MD Mick Hannaford met Vin Burdock, a rising star of the sport who made his P1 SuperStock debut in 2015 - taking the podium after only his second ever P1 race! This led to Robe officially backing Quantum for the 2016 season.

Says Mick, “We are all fascinated by the adrenaline buzz of speed and the skills needed to get the best out of a boat like this in extreme conditions, and it’s great to be able to share the knowledge and experiences of optimum performance generally! Just like Robe, P1 Powerboat racing is internationally renowned, and working with Quantum Racing enables Robe to offer our clients interested in knowing the engineering involved in this innovative sport, a close up look … or even just a fun day out at some of the best coastal locations around the UK”.

There are five more UK P1 Championship race meetings throughout the summer – including at Gosport, Cardiff and Bournemouth.

Vin comments, “I’m delighted that Robe is getting behind Quantum – we intend to have a great season and do all we can to make 2016 highly memorable, enthralling and fun for spectators!”

Vin’s winning streak continued through the 2015 season, and as his piloting skills developed, he attracted serious attention from the aficionados of the sport, leading to the team-up with John Donnelly as navigator who piloted a rival boat last year! 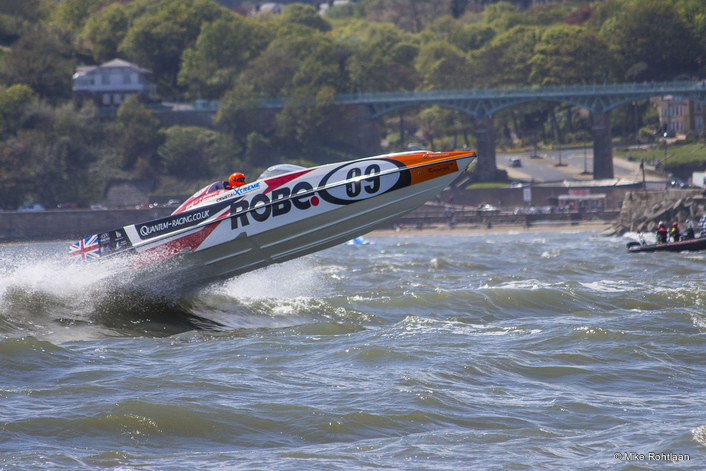 ‘Flying Quantum’ in action at P1 racing in Scarborough

The two are a great combination. John brings a decade of experience and engineering excellence to Vin’s massive enthusiasm for the sport, his natural talent as a pilot … and his willingness to learn.

Vin also collected the ‘P1 Rookie of the Year’ award in 2015 and was awarded ‘Best Newcomer’ in powerboat racing by organising body, the RYA Powerboat division … setting the bar extremely high for 2016!

‘Quantum’ is a 28ft long P1 Panther race boat. She weighs 1650 kilos - all boats are identical in structure – and is based on a 2010 design that was developed, tried and tested in the harshest conditions. She is powered by the Evinrude 250HO ETEC engine.

This even playing field for the boats puts all the emphasis for winning P1 SuperStock races on the skills and teamwork of the pilot and navigator to negotiate the different courses in various conditions getting the optimum out of their vessels and pushing them to the max.

At the end of the 2016 season Vin, John and Quantum will return to Coniston Water and attempt to beat their own World Water Speed Record.