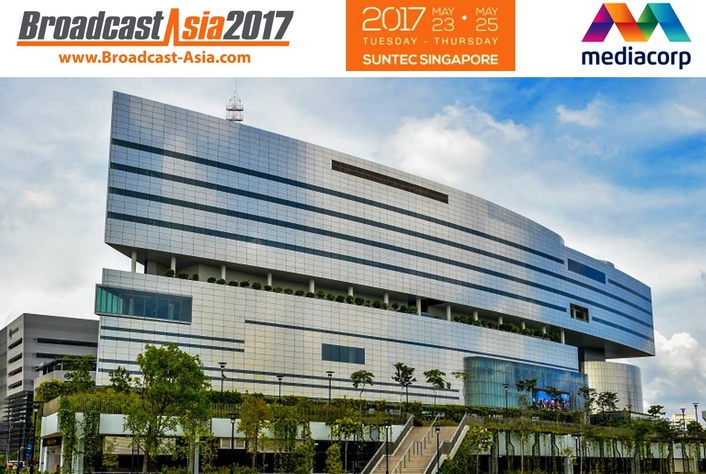 Mediacorp delivers over 50 products and brands in four languages (English, Mandarin, Malay and Tamil), reaching out to virtually all adults in Singapore weekly

Mediacorp’s new campus in one-north was designed as a collaborative space for employees, a hub for creativity and a destination for public engagement. As part of its new broadcast and IT infrastructure, Mediacorp wanted a modern, future proof solution for the delivery of high definition, IP based digital content across the whole campus.
The solution also needed to be a state-of-the-art, next generation platform that would not just deliver on project aims but satisfy IT security requirements, including the inclusion of head end server failover and redundancy and full centralised management of channel line-ups, user access and content delivery.
Get a Case Study at BroadcastAsia on 24 May by Anil Nihalani, Head of Connected Media, Mediacorp: The Evolution of Toggle Red Button 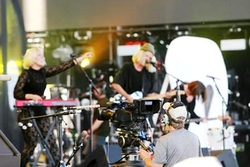 For Coachella this year, NEP had 24 hardwired cameras, 6 robotic cameras, and several POVs-about 32 cameras in all. The team ran miles of fiber optic cable and had six mobile units on site. "We used to have to park trucks in multiple areas but now we can put the remote units in one area and run fiber everywhere," Sheridan observes. "Adding wireless robotic cameras with Visionary Solutions encoders and decoders gives us even more flexibility." Sheridan first heard about Visionary Solutions eight years ago, when he was seeking ways to use IPTV to distribute video around venues. "Visionary Solutions popped up on our Internet search because they offer IPTV solutions," he recalls, "so we gave them a call." 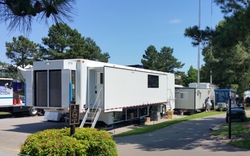 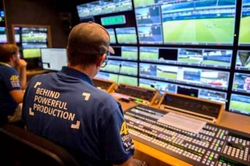 This project represents the first time that a full 4K/UHD workflow and playout solution is being installed in OB vans and studio in Switzerland, a significant milestone in that market. Included in the installation are native 4K cameras, switchers, routers, multiviewers and playout. The first OB van is already operating in the field and the studios will be coming online very soon. “We were looking for a supplier that could provide a true, end-to-end solution that would help us accomplish our goals for 4K/UHD production,” said Trond Hermansen, CTO and project manager, NEP Switzerland. “Grass Valley has a clear vision and an advanced portfolio; this investment is going to put us right where we need to be. Our customers have been asking about 4K, so the timing is ideal.” 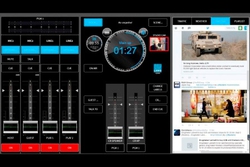 ADM was established 2007 as a joint stock company wholly owned by the government, and is one of the fastest growing, multi-platform media and entertainment organizations in the Middle East, with activities spanning broadcast, publishing and digital media platforms. The choice of Lawo’s Nova73 HD routing system was based on its hybrid to integrate with existing equipment via MADI and AES, and with the new IP-based Lawo mixing consoles in the studios via RAVENNA. The audio router provides 8,192 inputs/outputs, available via RAVENNA, AES3, MADI and SDH/STM-1interfaces, all in a compact 10U package. In terms of configuration and user friendliness, the Nova73 HD features a hot-plug capability and online configuration that even allows the system to be expanded and changed during live broadcasts. In terms of security, Lawo’s STAR² technology provides maximum redundancy and fail-safe operation. 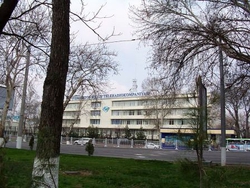 German systems integrator BFE Studio and Medien Systeme GmbH has been selected as prime contractor for a major broadcast infrastructure upgrade at Uzbekistan’s National Radio and TV Company, updating the equipment in its main broadcasting centre as well as its 12 regional studios across the country. Panasonic cameras have been selected for the equipment refresh, with a total of 42 AK-UC3000 4K studio cameras for use at NRTV’s broadcasting centre, regional studios and outside broadcast vehicles, alongside 15 AJ-PX270 handheld ENG cameras. The project will see 34 Panasonic AK-HRP1000 remote control panels installed, as well as another 8 AJ-PX5000 cameras used in the building of two new news studios.

Graphic design and animation studio DreamWall together with virtual studio company Zero Density today announced that they had joined forces to help France Télévisions deliver live coverage of the first and second round of the French presidential election on April 23 and May 7. The companies were chosen by France Télévisions to deliver virtual sets, augmented reality, infographics and animations to enhance the station’s programming, delivering an enhanced, engaging and informative viewer experience. “With the latest version of Zero Density’s virtual studio solution ‘Reality’, Dreamwall produced the most incredibly photorealistic images available today” said Arnaud Vincenti, artistic director of information programs and scenographer at France Télévisions. 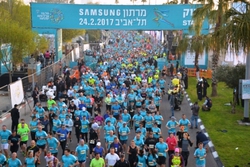 Attracting more than 40,000 runners to the city, the Tel Aviv Marathon is one of Israel’s most popular road races, and one of the city’s core annual international events. Technical production company, Point 2 Point Production was responsible for delivering all live coverage of the 2017 event, including big screen production around the marathon route for spectators and broadcast feeds for Israeli television channels. Point 2 Point’s owner, Erez Kuriel, tells us more about the company’s new OB van, which has been built with a Blackmagic Design infrastructure and was deployed for the marathon coverage. 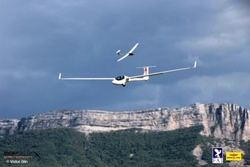 Telestream announced that its Wirecast live streaming production software recently allowed aviation sport fans worldwide to connect with the 34th FAI World Gliding Championships. With 29 nations competing in this year’s Championship in Benalla, Australia during January, the addition of sophisticated live streaming capabilities helped cement the event’s place as one of the largest sport aviation events in the world. Whether you’re a hard-core gliding fan or wide-eyed newbie, the World Gliding Championships has something for everyone. Mankind has always wanted to fly, and now with modern sailplanes it is possible for man to fly higher, faster and further than the greatest of birds. 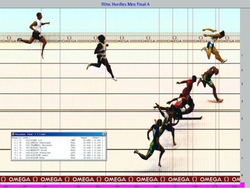 The International Olympic Committee (IOC) today announced an extension to its global partnership with official timekeeper OMEGA through to 2032, extending its existing partnership by 12 years to include the Olympic Winter Games Beijing 2022 through to the Games of the XXXV Olympiad (2032). The announcement was made at The Olympic Museum in Lausanne, Switzerland, by Thomas Bach, IOC President; Nick Hayek, CEO of Swatch Group and Chairman of OMEGA; and Raynald Aeschlimann, President and CEO of OMEGA. OMEGA is the first Worldwide Olympic Partner to commit to the Olympic Movement through to 2032. 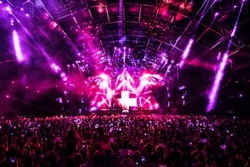 The lively and varied 2017 U.S festival season continues with the 2017 Coachella Valley Music & Arts Festival staged at the Empire Polo Club in Indio, California, where Robe moving lights were chosen by leading LDs like Steve Lieberman of SJ Lighting who specified Spiiders and Pointes for the Yuma stage … and Gabriel Fraboni, who added 90 x Spikies as specials for Dutch DJ Martin Garrix’s two storming sets in the Sahara Tent over the event’s two weekends. The 125,000 capacity festival is one of the U.S.’s highest profile music and arts extravaganzas, combining cool and fun vibes with an outstanding artist lineup. It’s also one of the most in demand festivals, with 2017’s nearly 200,000 tickets selling out in three hours despite 52,000 more being available over the weekend than in 2016. 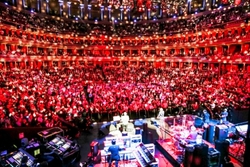 In support of Teenage Cancer Trust and in celebration of its 100th show at London’s iconic Royal Albert Hall, The Who performed a special presentation of rock opera ‘Tommy’ and their greatest hits on Saturday, April 1st. The show was part of Teenage Cancer Trust’s flagship annual fundraiser, raising millions to provide specialist care for young people with cancer. In partnership with the Teenage Cancer Trust, EP-PIC Films & Creative and Eagle Rock Entertainment, Procam Projects was chosen as the sole camera supplier for the filming of the show. “The Who: Tommy Live at the Royal Albert Hall" will be released on DVD, digital and TV in Q4 2017 by Eagle Rock. 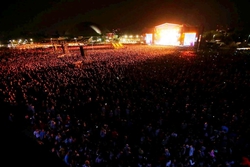 Based in Viña del Mar, near Santiago, Audio-pro has been supplying audio systems for corporate, social and artistic events since 1990. In the mid and late nineties, they moved into the ​​live music events, positioning themselves as one of the most serious and prestigious companies for sound reinforcement in Chile’s concert touring market. Last year, having thoroughly researched the market, they decided to shift up another gear and service large-scale concerts. “For this we had to buy the best loudspeaker system in the world,” says the company’s owner Jorge Diez. “L-Acoustics K1 was the clear choice, for its rider friendliness, quality sound and longevity. We knew it would be a good investment. 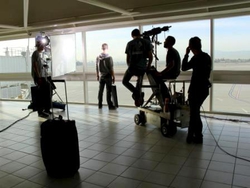 Chapman University students learn as they mix with Calrec Brio

At Chapman University's Dodge College of Film and Media Arts, a new Calrec Brio compact audio console is serving double duty — as a key player in a busy television production schedule, and as a valued teaching aid to prepare broadcast students for real-world careers. "When it came time to upgrade some of our aging production equipment, we had a tall order for a new audio console. Of course, price was a factor, and we needed a board that could handle the complexities of our news and narrative curriculum," says David Goedhart, Television Studio Engineer at Chapman University's Dodge College. "We also needed a console that would be simple enough for use in the classroom for basic audio monitoring. 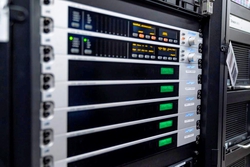 Al Jazeera, one of the world’s largest news organisations, has chosen Jünger Audio’s acclaimed loudness management technology to control and regulate audio across four of its main television channels. Based in Doha, Qatar, the broadcaster has installed 10 D*AP8 Slim Line Digital Audio Processors in a new central TX area that it has been constructed as part of the Al Jazeera Workplace Transformation Project (AJWT). The area incorporates five transmission booths – one for each channel (Al Jazeera Arabic, Al Jazeera Mubashir, Al Jazeera English and Al Jazeera Documentary) and one spare. The D*AP8 processors are housed in a Central Apparatus Room and are managed from the TX area by a Jünger Audio X*AP RM1 remote panel, which gives operators immediate control of all 10 units.

XD motion is an Expert in Aerial Filming and multi-dimensional travelling solutions. During NAB2017 XD motion was presenting two new innovations in the Future Zone. XD motion’s fiber technology allow to present the New Captive drone for long time aerial shooting. This drone is equipped with a Full Broadcast HD camera and zoom lens. Used for beauty shots in safety conditions, shots can be transmitted “Live” for hours and days. The 2 members crew allow a mobile and fast installation to move in different venue locations. 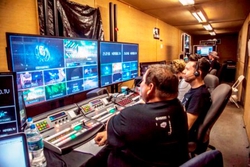 For the nineteenth edition of the world's premier electronic music festival, boasting elite DJs, unparalleled productions and located in the beautiful city of Miami some of the biggest performers in electronic dance music (EDM) played to a sell-out crowd of 165,000 people.  Another 7.5 million fans shared in the excitement and energy online via the Ultra Live stream presented by UMFTV and produced by NOMOBO.  All of NOMOBO’s fly-packs for the festival were based on a core of Blackmagic Design ATEM 1 M/E & 2 M/E Production Studio 4K switchers, complemented with Smart Videohub 4K routers, HyperDeck Studio Pro recorders, SmartScope Duo and SmartView 4K monitors. Importantly for UMF Miami, NOMOBO selected the URSA Mini 4.6K PL and URSA Mini Pro cameras for acquisition. 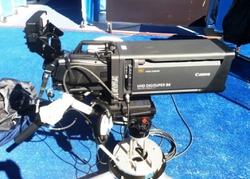 The majority of the new investment will be used to fulfil a major sporting contract, with 85 HDC-4300s, 43 OLED monitors, and a PWS-4500 server involved in the project. The HDC-4300 was chosen specifically for its peerless image quality, in order to deliver vibrant, true-to-life images to live sports coverage. The cameras needed to capture rich colours, superb detail, and a very low level of noise, in order to deliver enhanced picture quality. The HDC-4300s integrate seamlessly with the world’s most advanced 4K live production workflows, providing the sports industry with a smooth path to a 4K broadcasting future. NEP has also invested in the PWS-4500 live server system, one of the key elements of Sony’s next-generation 4K live production solution which includes XAVC for both 4K and HD and HFR recording capability.