Chapman University students learn as they mix with Calrec Brio

At Chapman University's Dodge College of Film and Media Arts, a new Calrec Brio compact audio console is serving double duty — as a key player in a busy television production schedule, and as a valued teaching aid to prepare broadcast students for real-world careers.

"When it came time to upgrade some of our aging production equipment, we had a tall order for a new audio console. Of course, price was a factor, and we needed a board that could handle the complexities of our news and narrative curriculum," says David Goedhart, Television Studio Engineer at Chapman University's Dodge College. "We also needed a console that would be simple enough for use in the classroom for basic audio monitoring.

"The Brio has far exceeded all our expectations. I can honestly say it's the best audio mixer I've ever used at this price point. It's intuitive, powerful, and full of great features. Best of all, Brio is giving our students fantastic hands-on experience with an industry-standard tool they'll be encountering in the real world of broadcasting."

A program of Chapman University, a private four-year university in Orange, California, Dodge College is renowned for its state-of-the-art production facilities and award-winning faculty, many of whom continue to work in the film and broadcast industries. "A key part of the mission of Dodge College is to be on the cutting edge of technology and put industry-standard tools in the hands of our students," says Dan Leonard, Associate Dean and Chief Technology Officer at Chapman University's Dodge College.

Dodge College broadcast journalism students produce Chapman News, a highly rated live weekly newscast, in addition to a range of talk show and narrative programs. The newscast is broadcast on campus, and throughout Orange County and the greater Los Angeles areas, as well as streamed live on Facebook and YouTube.

Students use Brio to mix a complex set of audio feeds for the news program, including audio from six anchors, four video playback channels, and reporters filing live news segments from two separate field locations. Brio handles IFB feeds from each reporter with its own dedicated mix, as well as incoming music tracks and other audio elements.

Brio also plays a key role in classroom instruction. Particularly valuable are the DVI connections on the back of the desk, which enable instructors to project output from the Brio touch-screen display to a large screen in the classroom.

"Many of us know Calrec from our previous broadcast careers," says Goedhart, "where we'd see big Apollo or Artemis boards on mobile trucks used for sports production. When the affordable Brio came out, we were thrilled that we could bring a Calrec into our own teaching and broadcasting environment.

"Not only is the Brio an outstanding teaching tool, but it's purpose-built for TV broadcasting. And because the Brio shares the same back end as the larger Calrec boards, our students will be able to walk right up to an Apollo, Artemis, or Summa someday, in their first professional jobs, and start mixing." 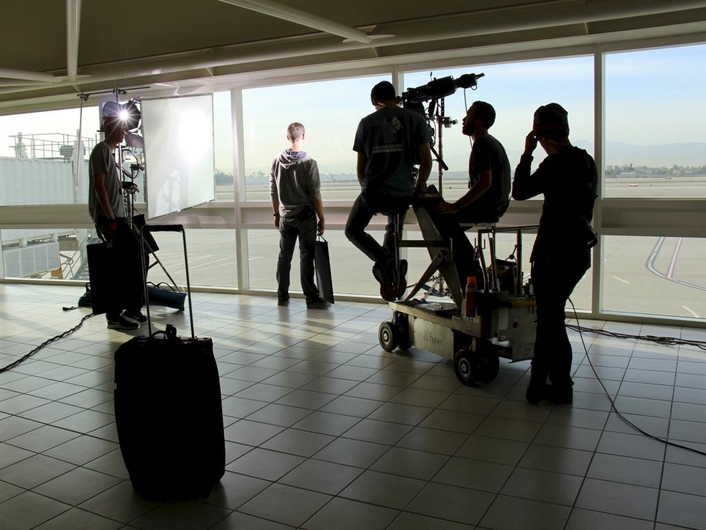 Calrec Audio U.S. Regional Sales Manager Dave Lewty adds, "Since we've launched Brio, we've seen a large new market open up for its use in an academic setting. In addition to Dodge College's ranking as one of the top 10 film schools in the world, it's also highly regarded for its broadcast television program. Its use of Brio as part of a collaborative, hands-on learning environment is a powerful testimonial."

About the Lawrence and Kristina Dodge College of Film and Media Arts
Recognized as one of the top ten film schools in the world and ranked #7 by The Hollywood Reporter among American film schools, Dodge College of Film and Media Arts at Chapman University offers students an array of undergraduate, graduate, and joint-program degrees that address the rapidly changing entertainment business including what it takes to pitch, produce, finance, market and distribute content. Open to students 24/7, Dodge College is housed on the film school campus comprised of the Digital Media Arts Center, Chapman Studios West, and the heart of the film school, the 76,000-square-foot Marion Knott Studios built from the ground up to replicate a working studio. Dodge College students have garnered numerous awards including Student Academy and College Television Awards. Notable alumni include Matt and Ross Duffer '07 (Netflix series Stranger Things) and Justin Simien (feature film/Netflix series Dear White People). With an award-winning full-time faculty with a combined filmography of more than 500 feature films, Dodge College is where students learn the entertainment business from the inside out.

About Chapman University
As an academically distinguished center of learning, Chapman University attracts extraordinary students and faculty from around the globe. Its ten schools and colleges foster a vibrant intellectual community, and provide extensive opportunities for students to learn, grow and discover alongside remarkable faculty. The University is home to some 8,000 students pursuing bachelor, master and doctoral degrees, and is alma mater to more than 40,000 alumni found throughout the United States and the world. Now celebrating its 155th year, Chapman is known for its distinguishing strengths in leadership and civic engagement, in the arts and entertainment disciplines, and in specialized sectors of technology and science. The University is comprised of its main campus in Orange, California, and the Rinker Health Science campus for graduate health science programs in Irvine, California.