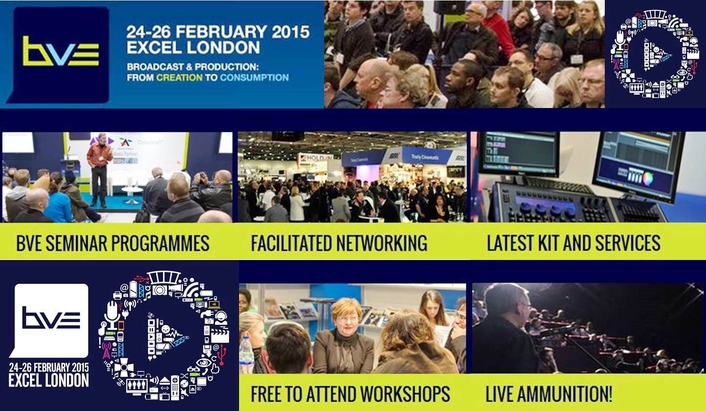 BVE 2015 is the Launchpad for Product Launches, Technical Innovations and Indispensable Gadgets

Next week BVE 2015 will welcome more than 240 exhibitors to showcase the latest products and technologies that take content from creation to consumption. The UK’s only show for the broadcast and production industry attracts manufacturers of many different kinds of broadcast technology, providing the ideal platform to launch products and services to the UK and European market.
Alison Willis, Event Director, said, “BVE is the number one destination for the UK broadcast industry to launch their new products and services. The internet is great for research, but nothing beats actually meeting vendors who can explain their products in human terms or, for the vendors, meeting the people who will use their products. It’s also a chance to see pieces of equipment in action - press buttons, flick switches and get excited about the technology.”
Leading manufacturers are in attendance with their latest products and technologies, while niche vendors sit comfortably alongside the major players, showing off brilliant innovations, products and services. The show also features the dedicated Production Services area, including studios, hire companies and other production services. 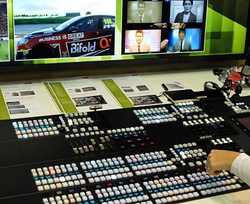 Leading German broadcast facilities company, _wige SOLUTIONS GmbH, has purchased a Snell Kahuna 9600 production switcher for a new  mobile production unit that will soon be joining its extensive fleet. Based in Meuspath, Germany, _wige SOLUTIONS has been supplying complete outside broadcast event services for over 25 years; this will be the sixth Snell switcher the company has purchased for its OB operations. The new mobile production unit, consisting of modular components to provide maximum flexibility, will be completed in spring 2015 and provide more broadcast possibilities than a conventional OB van. 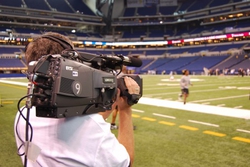 Lyon Video recently purchased six XA99x8.4 ultra-wide field production lenses to compliment the mobile production company’s Grass Valley LDX80 Worldcam cameras on its Lyon 14 mobile unit. The XA99x’s have already been used by ESPN for ESPN/ESPN2/SEC for NCAA football game coverage, including the 2014 Iron Bowl, Peach Bowl, Orange Bowl, and will be deployed on a daily basis for all types of programming produced by Lyon Video clientele. Other Lyon customers who have taken advantage of the new lenses include Fox Sports and Yahoo Media Productions.  Fox Sports production crew shot vintage cars road racing at Mazda Laguna Secca Raceway with XA99x’s.  And Yahoo Media used the lenses for coverage of their Red Carpet show at the 2014 Emmy Awards in Los Angeles. 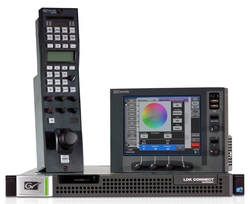 For Mediatec Broadcast bringing its viewers all the action from nearly a dozen horse racing tracks across Norway is a top priority. To keep costs down, Mediatec turned to Grass Valley, a Belden Brand, for a remote broadcasting solution that can send camera feeds via fiber connections to its main facility in Oslo. The company purchased 20 LDX Première cameras with digital triax connections and four LDX Première cameras with fiber connections. LDX Première cameras are easily upgradable, can switch between 1080i and 720p, and offer a feature set which is optimized for live productions. With their high sensitivity and dynamic range they deliver outstanding image performance even under the most demanding lighting conditions.

Dolce Sport is one of Romania’s leading terrestrial sports channels, broadcasting international sporting events and breaking the latest sports news to an audience of 1.4 million since 2010. Following the move to a new purpose-built studio building and a brand refresh to celebrate the channel’s 4th birthday, Dolce Sport has now partnered with Ross Video to help give the channel’s output a fresh new look. Ross Video has supplied a full turnkey virtual studio solution including Ross robotics, with the XPression graphics engine driving all virtual set, augmented reality, channel branding and ticker elements. The systems integration work was carried out by StudioTech, a Ross partner in Poland. 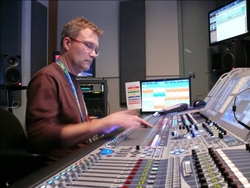 Having completed a series of significant upgrades to six control rooms at its Agincourt and Queen Street campuses in Scarborough, Ontario, in 2011, Bell Media (former CTV Canada) has expanded and integrated its Lawo mc²56 and zirkonXL consoles around a Lawo Nova73 router – creating a networked infrastructure with a total of five mc² series consoles. The initial installation supported migration from SD to HD, and included four mc²56 MkI digital production consoles and two zirkonXL consoles. These have now been joined by a further mc²56 MkII console. 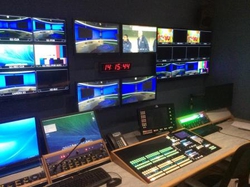 The project was completed in early January and incorporates an HD upgrade to their presentation studio and an additional HD gallery to Input Media’s facility portfolio. This latest addition builds onto the continued Input Media infrastructure upgrade project started back in 2012 which was engineered by Gearhouse Broadcast. The final element put in place by Gearhouse’s systems integration division was the Kahuna Maverik, Snell’s modular switcher panel. The bespoke design of the Maverik control surface enables valuable space saving in the gallery production area as the panel design is built from independent modules and only the required modules can be installed creating a bespoke panel design, which is smaller in footprint and more specific in function than factory shipped 1, 2 and 3 M/E control surfaces.

Host Broadcast Services (HBS), a fully owned subsidiary of Infront Sports & Media, has been selected by the Union Cycliste Internationale (UCI) to serve as host broadcaster of the 2015 UCI Track Cycling World Championships, which will be held in the Parisian suburb of Saint-Quentin-en-Yvelines from 18 to 22 February. HBS has appointed Euro Media France to provide the technical platform. Overall, HBS will operate more than 13 cameras at the event, carrying out the host broadcast with a team of 72 experienced staff. The HDTV signal will be provided to broadcasters worldwide. The UCI and its exclusive media rights partner Infront Sports & Media have distributed the rights to more than 100 countries and territories. Over 300 media representatives are also accredited onsite. 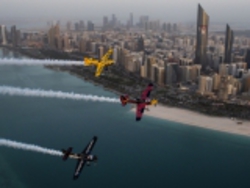 Hitting top speeds of 370 km/h while flying just above the turquoise waters of the Arabian Gulf, Bonhomme mastered the scorching temperatures above 30 degrees Celsius and the changing winds to take top honors with a time of 57.787 seconds in the first of eight races in 2015 of the world's fastest motorsport series. Hall was a close second on a glorious day for racing, just 0.084 seconds behind in 57.871 seconds, while Pete McLeod of Canada took third in 58.843 seconds in the Fédération Aéronautique Internationale (FAI) official air racing world championship. Defending Red Bull Air Race World Champion Nigel Lamb ended up a disappointing fifth after being knocked out by Bonhomme in the Round of 8. 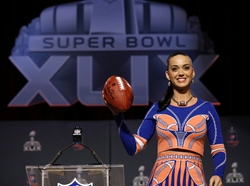 The key to success for live streaming a big live event like the Olympics or the Super Bowl isn’t something that’s apparent to the viewer. It’s the workflow telemetry, the ability to look into each step of the workflow to find and address any issues before they impact the end viewing experience. “Insight across the entire workflow is the key to successfully streaming a live event such as the Super Bowl,” says to Mio Babic, CEO and founder of iStreamPlanet. “Taking advantage of real-time telemetry and alerts we were able to monitor the quality of the source and the encoding and confirm ad marker and slate insertions, closed captions, and uninterrupted publishing in order to catch any issues before they could impact the viewer.” 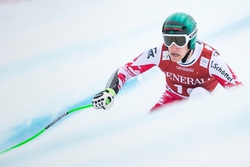 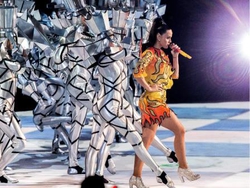 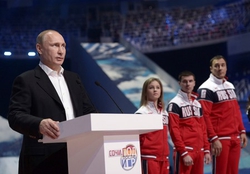 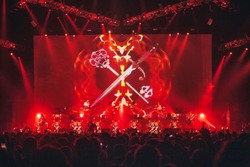 Bring Me The - ROBE - Horizon

Multi-Award winning - and Sheffield UK’s finest - metalcore rockers Bring Me The Horizon played a huge one off show at London’s Wembley Arena closing a phenomenal year,  celebrating the conclusion of their 18 month global ‘Sempiternal’ album cycle … and their 10th anniversary. The band’s Lighting Designer Ben Inskip chose 70 x Robe moving lights as the backbone of the show – because he knows the products and knew they would deliver the results he wanted. He needed multi-purpose lights that could perform several tasks and that all balanced well together as an integrated package.

Quantel announced the immediate release of a brand new range of servers for its Enterprise sQ fast-turnaround News and Sports production systems. The new servers have been designed from the ground up to take maximum advantage of the latest generation of disk and processing technologies. As a result, they are smaller, lower cost and much more powerful than the existing sQ400 and 800 servers, and provide a responsive platform to enable broadcasters to meet ever-shorter turnaround times in a broader range of live and near-live applications. The new servers are 100% compatible with existing Enterprise sQ systems. This means that current customers can expand and upgrade their systems with the latest technology rather than facing the expense and upheaval of complete system replacement. In this way the new servers extend the life of Enterprise sQ systems to 2020 and beyond.

GearBox, a UK-based rental company and part of the veteran broadcast technology supplier CVP Group, has acquired six LDX Première advanced imaging cameras and three LDX XtremeSpeed (LDX XS) 1X/3X/6X ultra-slow-motion cameras from Grass Valley, a Belden Brand. This purchase expands the United Kingdom rental market offering and exemplifies the strategic partnership the two companies have formed. “CVP Group’s partnership with Grass Valley has opened a lot of new doors for us. By broadening our scope of offerings, our clients have the ability to grow their productions with an entirely new and versatile camera choice,” said Stephen Ratcliff, rental director, GearBox. “Also, with the purchase of the LDX XtremeSpeed cameras, we’re answering the growing demand in the UK for an ultra-slow-motion camera that can handle high frame rates,” he added. GearBox’s new LDX fleet will be utilized across a range of productions including in-studio and live sports. 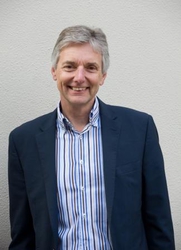 Sharing the Latest Industry Knowledge at this Year’s BVE2015

IABM will mark its biggest ever presence at this year’s BVE 2015 by holding a series of must-attend business seminars. The sessions will be led by a number of high profile speakers including representatives from one of the nation’s favourite soap operas and a top-flight premier league football team. Chaired by Director of Business Development and Technology at IABM, John Ive, the four seminars will be held back to back on the opening day of the event, Tuesday 24 February, in the Broadcast Tech and Workflow Theatre between 10.40am and 3.50pm. 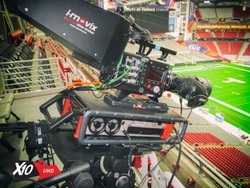 Thanks to Chicago-based sports production specialists Fletcher Sports, the I-MOVIX X10 UHD technology has been used during the NFL Super Bowl XLIX Big Game, held at the University of Phoenix Stadium, Glendale, Arizona. For this very prestigious world sporting event - and one of the most watched game with an average record of 114,4 million US viewers - Fletcher Sports deployed a fleet of five I-MOVIX X10 UHD cameras, which were tied to Evertz DreamCatcher systems.

ARRI announces the upcoming release of Software Update Packet (SUP) 2.0 for AMIRA cameras, and the subsequent release of SUP 3.0. The former unlocks 4K UHD recording for high-resolution pipelines, while the latter enables MPEG-2 MXF recording for streamlined, broadcast-friendly workflows. Together they stretch the already wide spectrum of AMIRA’s deliverable options at both ends of the scale, making the camera an even more versatile production tool. Underlining the positioning and success of AMIRA as the perfect camera for productions ranging from documentaries, reportage and corporate films to TV and low-budget movies, these two major software updates in the first half of 2015 will enhance the feature-set in ways that respond specifically to customer requests and industry trends.