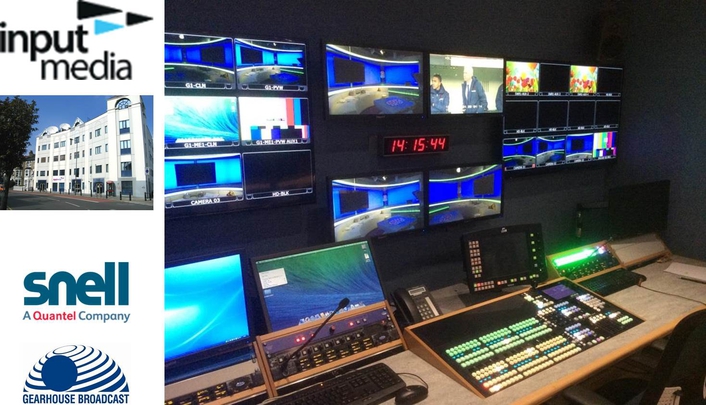 A programme of upgrades to Input Media’s London HQ are finalised with the innovative switcher panel install
Input Media, one of Europe’s leading sports production companies, has again selected Gearhouse Broadcast as their SI partner for additional facility refurbishments at its state-of-the-art west London facility. This has included the first UK install of Snell’s Kahuna 360 modular switcher panel, Kahuna Maverik.

The project was completed in early January and incorporates an HD upgrade to their presentation studio and an additional HD gallery to Input Media’s facility portfolio. This latest addition builds onto the continued Input Media infrastructure upgrade project started back in 2012 which was engineered by Gearhouse Broadcast. The final element put in place by Gearhouse’s systems integration division was the Kahuna Maverik, Snell’s modular switcher panel. The bespoke design of the Maverik control surface enables valuable space saving in the gallery production area as the panel design is built from independent modules and only the required modules can be installed creating a bespoke panel design, which is smaller in footprint and more specific in function than factory shipped 1, 2 and 3 M/E control surfaces.

The modular nature of the Kahuna Maverik gives Input Media’s technical directors and technology team the ability to set up the panel specifically for each production’s requirements. Instead of being limited to just one or two M/Es, with fixed function, the panel can be continually reconfigured to control different functionality within the switcher. The panel offers modules for setup, source delegation, transitions, keyer control, effects and user function recall, colour correction, resizing and clip store access – functions which would typically occupy an entire side of a traditional panel. However, the space-saving nature of the Maverik allows for functions to be chosen on a case-by-case basis. It also features OLED buttons with user-assignable thumbnails, a touch-screen GUI module and the ability to assign RGB colour values to buttons for easier operation.

“This switcher panel will give these production galleries a much more flexible way of operating,” said Simon Smith, systems integration engineer at Gearhouse. “And integrating it was a great final piece of the jigsaw after this complex and interesting install for Input.”

“We’re very excited about being the first UK facility to have the Maverik built into our live production workflows. It offers us much more agility to quickly adapt the facilities and technology to meet the requirements of our live operations. Our Directors working in our London HQ are going to have a more flexible and reliable control interface, as well as reducing the job setup time.” said Nick Symes, Director of Technology at Input Media.

About Input Media:
For 25 years Input Media has been out in front producing top-quality programming and using cutting-edge technology to deliver flexible broadcast solutions for some of the world’s biggest sports federations, broadcasters, and football clubs. The company’s list of blue-chip clients includes UEFA, The Football Association, the French Tennis Federation, BBC Sport, ITV Sport, ESPN, the Women’s Tennis Federation, and Chelsea FC.