Bring Me The - ROBE - Horizon 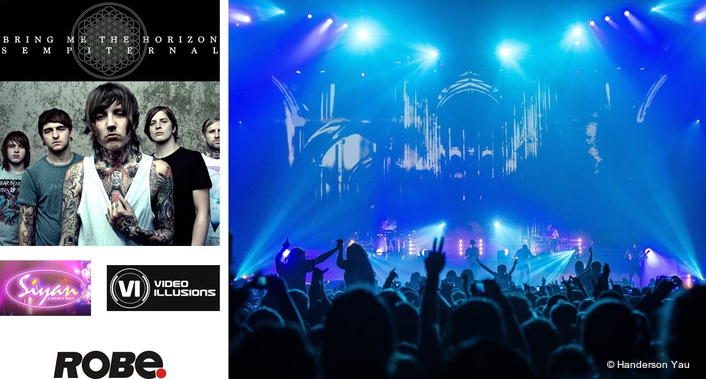 Multi-Award winning - and Sheffield UK’s finest - metalcore rockers Bring Me The Horizon played a huge one off show at London’s Wembley Arena closing a phenomenal year,  celebrating the conclusion of their 18 month global ‘Sempiternal’ album cycle … and their 10th anniversary.

The band’s Lighting Designer Ben Inskip chose 70 x Robe moving lights as the backbone of the show – because he knows the products and knew they would deliver the results he wanted. He needed multi-purpose lights that could perform several tasks and that all balanced well together as an integrated package.

Ben has worked with the band since 2009. He has a great rapport with them and they trust him implicitly to come up with interesting design concepts for their live work, which in this case also included upstage video projection. Being a one-off, possibly the most important parameter was that the design was practical and quick to load-in and rig … whilst also looking massive and impressive to fill the venue’s cavernous interior.

The LEDBeam 100s were distributed across a network of trussing in 13 clusters of three. Thirty (10 clusters) were flown on chevron shaped trusses, helping to accentuate their eye-catching architecture. The remaining nine LEDBeam 100s were ensconced in and around the backline to help extend the beamy ‘fan’ lighting looks across the entire space. These were a must-have for Ben due to their “Agility, brightness and small size”.

He remarks that the LEDBeam 100 is fantastic for trailer tours and the smallest gigs on one hand … and yet holds its own brilliantly on arena shows like this. There are not many fixtures around that can achieve this! 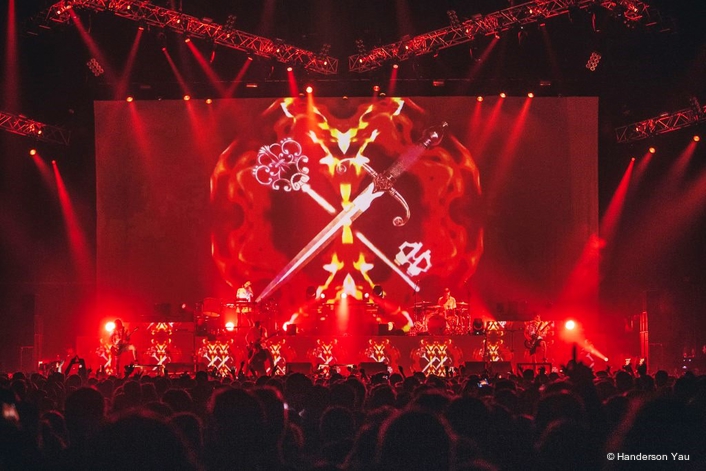 Eight Pointes were rigged four each side of the upstage chevron truss, with six on the floor following the same lines, resulting effectively in two vertical beam ‘walls’ behind the band. They were used equally as beam and in spot modes throughout the show, bringing numerous different shapes to the stage – from a large diamond to a 3D box surrounding the band to laser simulations utilizing the linear prism and a tight aperture.

The MMX Spots were rigged five on the floor and six in the air. The floor based fixtures made dramatic silhouetting effects using gobos and worked in conjunction with the LEDWash 600s placed behind the band members adding heavy back-light to the scene.

The flown MMX Spots helped augment the looks created with the other overhead moving lights – whether the need was for additional tight columns of light, super-wide gobo shafts or additional lighting for the IMAG cameras. “They are bright with an excellent zoom range, a great selection of gobos and the adjustable hot-spot is ideal for flattening beams out for the camera,” Ben comments.

One of the challenges with lighting this show was trying to keep a clear path for the projectors – mounted at FOH – to hit the large upstage screen. Ben’s BMTH aesthetic usually involves a lot of low backlighting, so to retain this and keep lighting tucked away around the set meant he needed fixtures that were properly unobtrusive. Once again the Pointes and LEDBeam 100s proved a great solution.

Ben has been using Robe products in his work for some years and thinks the brand is extremely strong right now. “All the new products are well thought out and very good quality. They do what they are built to do without any tacky or gimmicky elements”. 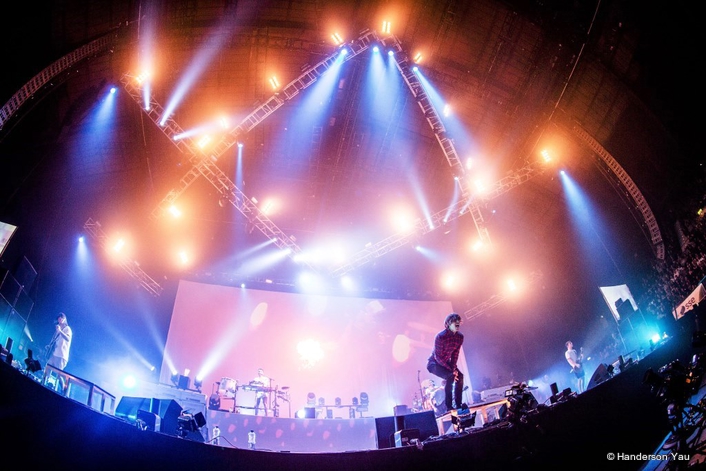 Since the Wembley show, he’s managed to get his hands on Robe’s new BMFL Spot, which he is really excited about … and he can’t wait to spec some onto his next project!

Video Illusions supplied the projectors and the video content was created by Oliver Hutchinson who also ran the playback system. The IMAG package came from Video Illusions.