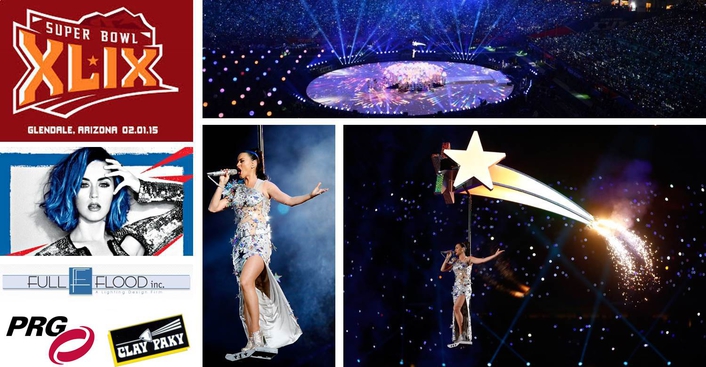 Even before the halftime talent is selected, the venue sets the scene for the production and lighting design.  “It all depends on what creative options the stadium offers,” says Barnhart.  “If the University of Phoenix Stadium didn’t have a roof we couldn’t have done the projection, for example.  Potential weather conditions are also a factor. 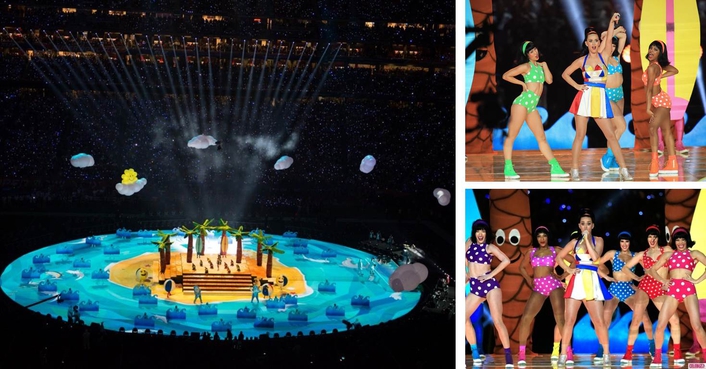 “The Super Bowl is different from anything else I do. The halftime show had an amazing entrance and exit and a lot of different things happening in between – all in 12 minutes stuck in the middle of the world’s largest sporting event,” he says.  “The first two-and-a-half minutes featured 600 glowing orbs, a giant lion and a moving chessboard.  That was a lot of eye candy that kept viewers wondering where it all was headed.  We went from end zone to end zone twice: Katy started in the north end zone, joined Lenny Kravitz & Missy Elliott in the south end zone then went back to the north end zone for the flying rig.  The show was physically very large and very ambitious in all areas – the production design team did a great job; it was quite amazing!”

Barnhart positioned 140 Sharpys on the upstage side of the 400-level rail and the south end zone rail and deployed several on a cart behind the lion puppet to add some light and texture behind the giant creature as it moved through the dark.  The Sharpy has been used in Super Bowl rigs since the fixture made its debut in the US.

“Sharpys are great for their white-hot beams; they’re really good for giving air graphics in a large-format venue.  And they’re nice and small, too,” he says.

David Grill, one of the show’s lighting directors, notes that one of “coolest things” about the three Clay Paky fixtures  is “the amount of light it generates compared to the amount of power it consumes.  Gone are the days of using vast quantities of power.  Power has huge implications on a production: paying for it, acquiring / generating it, and the quantity of cables required to connect a cart.  With the chosen fixtures we  had 14 fixtures on a cart with only one power connection.  We don’t need to plug in three cables when we’re moving fast and every second saved helps you.”

Barnhart was introduced to Clay Paky’s new Mythos hybrid fixture at a demo at A.C.T Lighting’s LA office.  “I saw a great high-powered beam, then they zoomed it out,” he recalls.  “I knew right away that this kind of versatility could be very useful to me.” 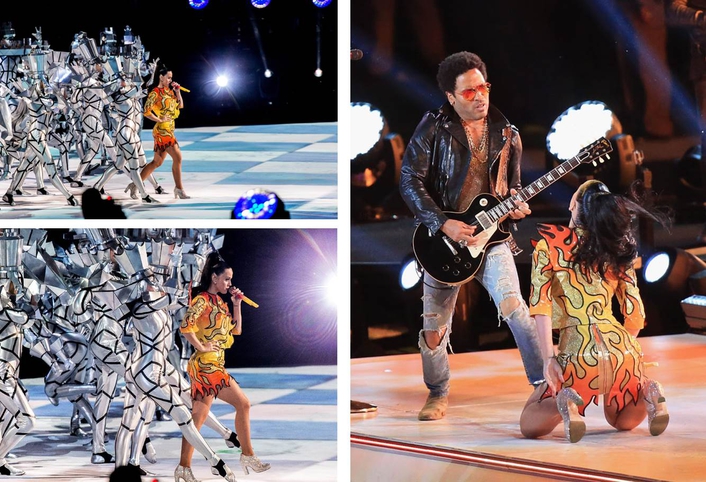 Grill was also impressed by the Mythos as well.  “Their brightness, ability to color fade, their gobos and unique beam spread – Mythos had everything we needed,” he says.

“We knew the manufacturer and A.C.T Lighting stood behind Mythos, so we had none of the worries that can accompany the use of a new fixture on a big show,” Grill adds.

Barnhart points out that the halftime stage set posed a unique lighting challenge.  “It was a projection surface, but it had a lot of dancers on it.  I had to light them but not the surface.  And when there were no dancers, I wanted to provide dynamic air graphics.  I positioned the Mythos fixtures around the perimeter of the projection surface on giant rolling carts so I could light the dancers and fill the air with beams of light.  I had custom gobos to use like shutters and cut off the field.”

The B-EYE K20s made their Super Bowl debut last year when they were new to the market, says Barnhart.  This time he upped the quantity significantly, dimmed the fixtures to seven percent and used them in conjunction with the Mythos fixtures on carts.  “They provided more eye candy for the background and made the perimeter set glow.  Their color and pattern movement added tempo and activity to the camera shot,” he explains.

Francesco Romagnoli, Clay Paky Area Manager for North and Latin America, added, “It’s an honor to be involved in so many Super Bowls and the lights looked amazing.  I was proud when I watched the game and so thrilled to be working with such great designers as Mr. Barnhart and Mr. Grill.”