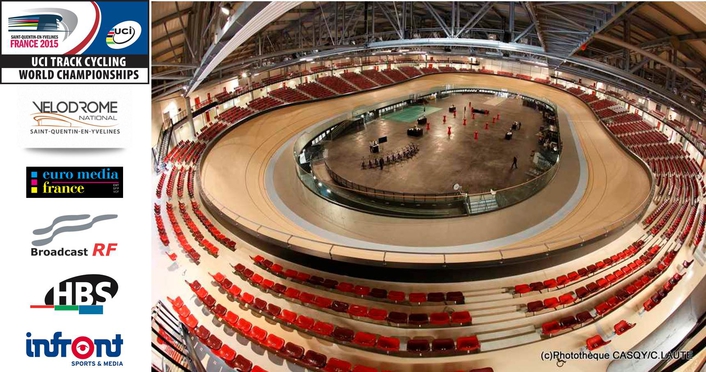 The live production of the event in France will feature live on-board cameras from Broadcast RF
Host Broadcast Services (HBS), a fully owned subsidiary of Infront Sports & Media, has been selected by the Union Cycliste Internationale (UCI) to serve as host broadcaster of the 2015 UCI Track Cycling World Championships, which will be held in the Parisian suburb of Saint-Quentin-en-Yvelines from 18 to 22 February. HBS has appointed Euro Media France to provide the technical platform.

Overall, HBS will operate more than 13 cameras at the event, carrying out the host broadcast with a team of 72 experienced staff. The HDTV signal will be provided to broadcasters worldwide. The UCI and its exclusive media rights partner Infront Sports & Media have distributed the rights to more than 100 countries and territories. Over 300 media representatives are also accredited onsite.

As part of its inaugural host broadcast, and in addition to its usual goal of providing world-class and specialised production services, HBS will introduce with the UCI a new feature. For the first time ever at a UCI Track Cycling World Championships, miniaturised cameras installed on the bicycles’ saddle tubes will transmit live images of the race to viewers worldwide, as well as to the Velodrome’s giant screen.

HBS has worked on the project in close collaboration with radio frequency (RF) transmission experts Broadcast RF, who will supply the cameras, transmitters, specialised operators and their technical partner VideoSys Broadcast while the UCI has been involved at every stage of the process, with the utmost priority being given to competition-related matters. 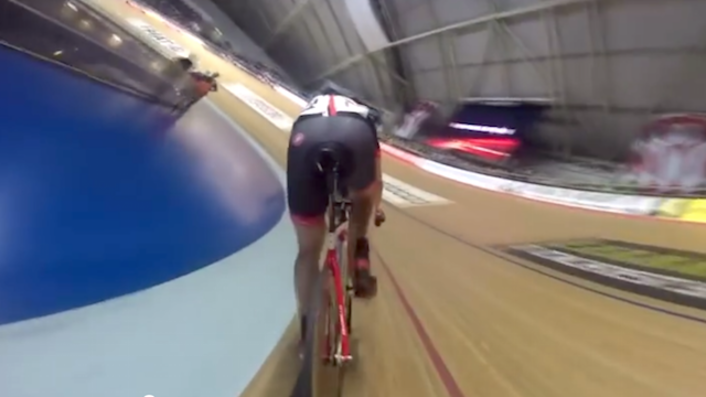 On Board RF Camera

Viability proven in testing
Following initial research and development focused on making the camera and RF transmitter as safe, compact and light as possible, HBS organised a number of tests served to establish the project’s viability. The French National Team participated in the first of these tests, with a second one taking place at the UCI’s headquarters in Aigle, Switzerland. The camera and transmitter used during the first test weighed a combined 300 grams – a minimal weight that has since been shaved down to an astounding 199 grams.

HBS had previously provided broadcast consultancy and on-site support for the last two editions of the UCI Track Cycling World Championships, in Minsk, Belarus and Cali, Colombia. Steve Docherty, who will be the Director of this year’s event, worked on both the 2013 and 2014 editions as well and explains that “the team and I are all delighted to be part of the 2015 Championships and excited by the enthusiasm and innovations HBS and the UCI have brought to the sport. It’s always a thrill to be able to do something unprecedented.”

According to HBS’ best practices, Steve Docherty will be working alongside his preferred production team, an international selection of broadcast cycling experts, with HBS’ Director of Production Dan Miodownik and Executive Producer Julien Bertin overseeing the entire project. “The live on-board camera is the angle that has been missing from track cycling coverage,” says Dan Miodownik, “and it’s one that will delight both the hardcore fans and viewers new to the sport. Getting to this point requires significant technical integration, but with the expertise from our technical partner Broadcast RF and the commitment and vision from UCI, we are ready to bring something completely new to track cycling coverage.”

About HBS
HBS, a fully owned subsidiary of Infront Sports & Media, is one of only two companies in the world dedicated to host broadcasting. As the Host Broadcaster of the 2002, 2006, 2010, 2014 and 2018 FIFA World Cups™, HBS is responsible for the most watched sporting event on the planet. In addition, HBS has worked on a wide range of other events and sports, either as host broadcaster, in a consultancy role or as a service/facilities provider.