Some Show Reports from December 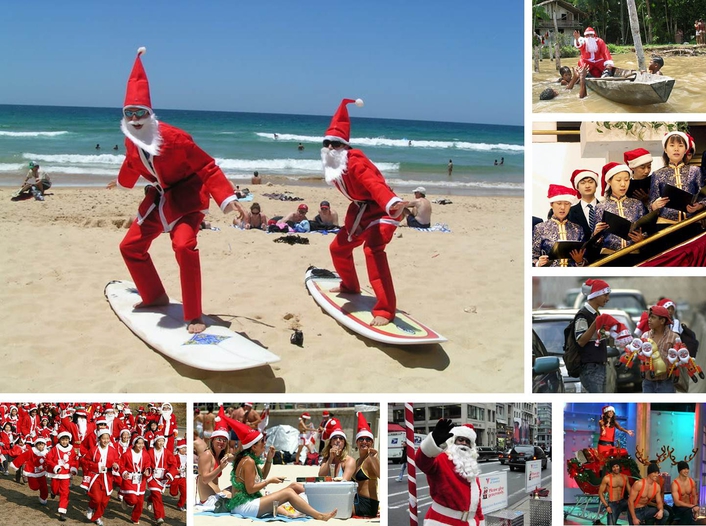 The LIVE-PRODUCTION Team wishes you a Very Merry Christmas and a Prosperous and Happy New Year!

Customers of AJA Video Systems keep finding new ways to use its Ki Pro tapeless recording device. Nyquest Ltd., a company specializing in producing concert footage, recently used the flexible device as an extremely cost-effective solution for converting 20 hours of HDCAM footage into the Apple ProRes format to enable immediate editing in Final Cut Pro. Nyquest discovered the Ki Pro after directing a 10-camera shoot of Alice Cooper live during his “Theatre of Death” tour date at London’s legendary Hammersmith Apollo. “We had done this massive HD shoot for the Blu-ray production and wanted a really simple way to get our HDCAM footage into ProRes so we could edit straight away,” said Dave Meehan, director, producer and Nyquest founder. “We went to a couple of post houses with our 30 HDCAM tapes hoping they could digitize the footage for us. We were quoted costs that were in the 4,000 £ range (approximately $7,000 US). We just didn’t have that kind of budget for digitizing.”

There are a lot of exclamations of “OMG” (Oh my God) on Usher’s current OMG Tour, his first big-budget spectacle since 2004. The platinum-selling artist has remarked that he wanted to make sure his show was state of the art and would have fans leaving with an OMG experience. Meanwhile, behind the scenes grandMA2 full-size consoles are generating “OMGs” of their own. Usher’s futuristic, high-concept show challenged Lighting Designer Peter Morris and Associate Lighting Designer Eric Wade. “We had to design around a lot of fly gags and moving set pieces,” notes Wade who heads FOHShow, a lighting- services company. “The rig is designed to look big but not be completely massive; it’s large but not over the top. It fills two trucks and features between 160-200 fixtures.”

As Deep Purple continue their tour through Germany and France, their long-serving FOH engineer Gert Sanner has taken the opportunity to transfer his show mix from his trusty Soundcraft Vi6 digital console to the smaller footprint of the new Vi1. An early adopter of the Vi6 (since when he has regularly provided technical support to sales and rental company, SSE Group), Sanner was keen to move his show files to the Vi1 and prove the process in a real-world environment. “The purpose was to create show files that would work on any Vi console,” he stated, with the end goal of purchasing a Vi1 for the band. Fortunately, the show transfer has proved 100% successful. The features that originally persuaded Sanner to adopt this route were not only the Vi1’s compact footprint but the analogue inputs on the rear of the console. “This feature is great for the festival shows we do all over the world. It gives me the chance to use either the optical multis or analogue inputs from the house multis — providing the flexibility for all situations we would run into.”

A majestic show: grandMA for Kings of Leon 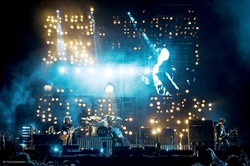 The current Kings of Leon world tour features another innovative design by LD Paul Normandale with all lighting controlled by a grandMA full-size console. Normandale specified the grandMA - as he does on many of his shows - for its stability and reliability. The lighting is being operated and looked after on the road by director Ali Bale - using a grandMA for the first time. Another grandMA light is being supplied by XL Video to run the Catalyst media server playing back video content. Normandale has worked with the band since 2004, each time coming up with a fresh and distinctive visual treatment for the stage, and this - which was nominated for a 2010 Parnelli Award - is no exception. The conceptual look of the show features a large and battered, messed-up looking back wall made up of 640 PAR, nook and raylite fixtures, an idea that came to Normandale because the band like fast cars, so the wall of lights resembles a giant metallic wall of retro headlights in a tribute to American muscle car culture. He also wanted to have a complete departure from a large or dominant video screen or wall at the back.

New on SAT.1: “The Hit Giants” from the Coloneum 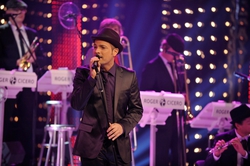 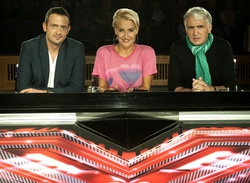 Telecast Fiber Systems' CopperHead™ 3200 camera-mounted fiber optic transceivers are playing a starring role in the first HD broadcast of the popular U.K.-based television series, "The X Factor." Working in tandem with Telecast Fiber's Python II™ bi-directional transmit/receive systems, the CopperHead 3200 units have enabled "The X Factor" producers to leverage the portability and low cost of fiber for on-location shooting at a variety of outside broadcast locations. "The X Factor" is an entertainment talent show originated by FremantleMedia and carried by the British network ITV on its ITV1 and ITV1 HD channels. In early October, the show entered its live studio phase after several weeks of on-location, remote production at various audition, "boot camp," and "judge's house" sites around the U.K. and the rest of the world. To facilitate the remote HD productions as cost effectively and effortlessly as possible, show producers talkbackTHAMES and Simon Cowell's SyCo Tv enlisted the services of HotCam, a broadcast equipment rental company based in the U.K. and U.S. HotCam supplied the production with fiber optic-based flypack production packages that included 15 Sony XDCam PDW F800 camcorders, each equipped with a CopperHead 3200 HD transceiver.

The last notes of A-Ha’s 25-year career have been recorded for a special DVD release by long-time Lawo customer Cinevideogroup, using the mc²66 in its flagship mobile production vehicle, OB14. Ironically, although it is A-Ha’s farewell concert, it is their first-ever live DVD. The final four shows of the “Ending on a High Note” tour were played in the band’s home town of Oslo at the famous Spektrum venue. Leading broadcast facilities company Cinevideogroup was called in by film-makers Serpent Productions and director Matt Askem to provide a 10-camera HD recording of the event, complete with digital audio, for future release. Inside the sound control room of the state-of-the-art OB14 were British sound engineer Toby Alington, well known for his work on the BRIT Awards and MTV Europe Awards, and Huub Lelieveld, Cinevideogroup’s senior audio engineer. Alington has responsibility for the final 5.1 mix of the project, while Lelieveld was responsible for the multitrack recording in Oslo.

The glitz and glamour of the 2010 Strictly Come Dancing season waltzed onto the UK’s televisions in October with a host of new celebrity students, professional dancers and guest stars in anticipation of an exciting 14 weeks of dance entertainment. Coupled with a brand new and critically acclaimed set, courtesy of set designer Patrick Doherty, this year’s Strictly was sure to be a guaranteed success. Creative Technology was proud to support the new set design, providing a wide range of visual solutions for both the Saturday competition dance show and the Sunday results programme. In keeping with the art deco inspired theme, this year’s design called for two curved proscenium arches, realised with CT’s MiTrix LED display to provide the show’s stunning art deco inspired theme. Utilising the new Flyer 18 display for the main set backdrop, the entire effect delivers an outstanding and contemporary style reminiscent of theatre architecture seen in the ballrooms of the 1920s.

The LIVE-PRODUCTION Team Wishes You a Very Merry Christmas and a Prosperous and Happy New Year!