A majestic show: grandMA for Kings of Leon 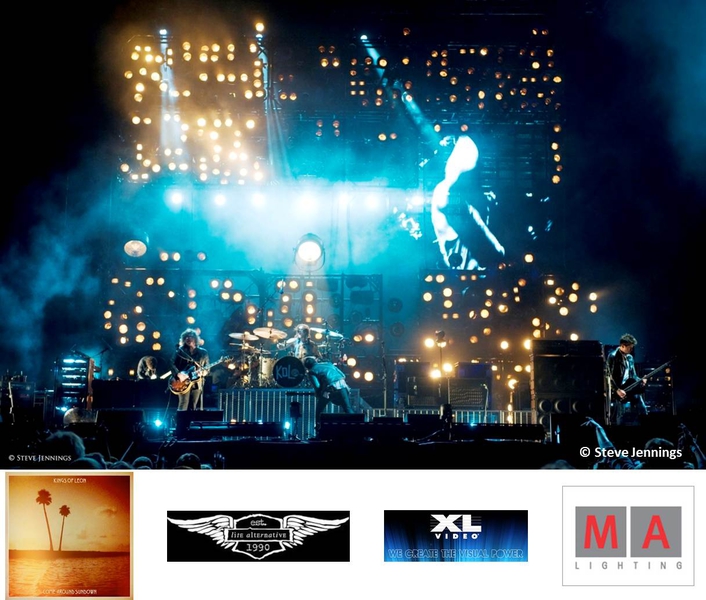 The grandMA and other lighting control elements are being supplied worldwide by Blackburn-based Lite Alternative
The current Kings of Leon world tour features another innovative design by LD Paul Normandale with all lighting controlled by a grandMA full-size console. Normandale specified the grandMA - as he does on many of his shows - for its stability and reliability. The lighting is being operated and looked after on the road by director Ali Bale - using a grandMA for the first time. Another grandMA light is being supplied by XL Video to run the Catalyst media server playing back video content.

Normandale has worked with the band since 2004, each time coming up with a fresh and distinctive visual treatment for the stage, and this - which was nominated for a 2010 Parnelli Award - is no exception. The conceptual look of the show features a large and battered, messed-up looking back wall made up of 640 PAR, nook and raylite fixtures, an idea that came to Normandale because the band like fast cars, so the wall of lights resembles a giant metallic wall of retro headlights in a tribute to American muscle car culture. He also wanted to have a complete departure from a large or dominant video screen or wall at the back.

The 640 'headlights' are pixel mapped through the grandMA, and this was another reason why the console was chosen - because this function is so very quick and easy. "It's a wonderful time-saving device," Normandale states, explaining that it only took about 20 minutes to do the mapping plus a further hour of programming, and then they had their main effects on the wall.

There is no lighting downstage of the wall, and the band are highlighted by left and right truss spots mounted on the side trusses, and 16 wash lights also from the sides. Ali Bale is based in Australia, so he did his MA training before the tour started in the US, which was followed by pre-programming at Upstaging in Chicago, before production rehearsals. All reports are that he really likes working with the grandMA.

The grandMA and other lighting control elements are being supplied worldwide by Blackburn-based Lite Alternative, which is also providing all lighting equipment for the European sections of the tour. Upstaging is the lighting contractor for the US.

Lite Alternative is currently supplying grandMA2 consoles to The Scissor Sisters tour with lighting director Glen Johnson, which will then go on to James Blunt with him in February, and The Chemical Brothers start up in January also using a grandMA full-size.