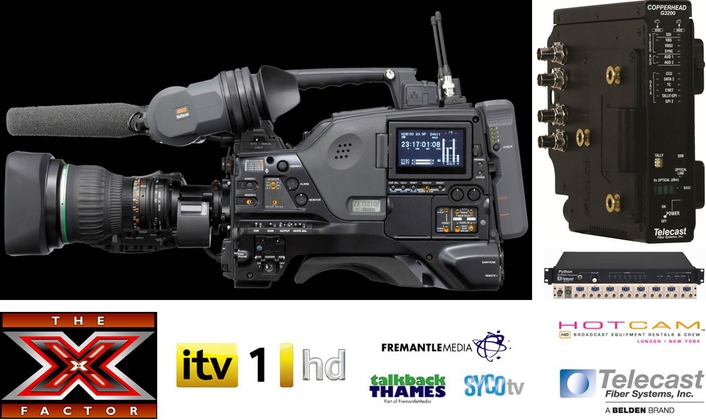 "The X Factor" is an entertainment talent show originated by FremantleMedia and carried by the British network ITV on its ITV1 and ITV1 HD channels. In early October, the show entered its live studio phase after several weeks of on-location, remote production at various audition, "boot camp," and "judge's house" sites around the U.K. and the rest of the world. To facilitate the remote HD productions as cost effectively and effortlessly as possible, show producers talkbackTHAMES and Simon Cowell's SyCo Tv enlisted the services of HotCam, a broadcast equipment rental company based in the U.K. and U.S. HotCam supplied the production with fiber optic-based flypack production packages that included 15 Sony XDCam PDW F800 camcorders, each equipped with a CopperHead 3200 HD transceiver. In addition, HotCam provided portable vision mixing and lighting packages that could be delivered in flight cases and easily installed to provide temporary "video villages" in venues including Wembley Arena, Manchester Central, and the Cardiff International Arena.

"For a production of this type, which requires a real 'documentary' feel, we've always resisted deploying mobile broadcast trucks," said "The X Factor" Executive Producer Andrew Llinares. "The portable solution that HotCam provided is not only cost-effective, but also extremely versatile — and the Telecast equipment has enabled us to leverage all of the advantages of fiber for shooting on location in a variety of outside venues."

"'The X Factor' is a prime example of our clients who are shooting in large venues that require massive cable runs — and they've discovered they just can't get the job done with heavy copper cable," said Trevor Hotz, CEO of HotCam. "With the Telecast gear, these productions can carry all of the signals they need over a single lightweight fiber cable. That's why we chose the CopperHead 3200 and Python II systems as the basis for a fast-turnaround, tapeless broadcast operation that can be rapidly rigged and de-rigged. It's really ideal for productions such as 'The X Factor' that are constantly on the go, moving around the country to shoot at various location venues such as theaters, stadiums, and studios."

Based in London and New York, HotCam is a broadcast equipment rental and crewing company supplying the broadcast industry, commercials, and corporate clients with HD, SD, PAL, and NTSC broadcast cameras, audio, and lighting equipment. HotCam was founded in 1999 by BAFTA Award-winning sound recordist Trevor Hotz and Director of Photography Alistair Cameron. In 2005, Trevor Hotz and Production Manager Ali Grapes opened HotCam USA. Their collective years of expertise, experience, and credentials in the television and film industries make them an invaluable asset to their clients. HotCam is passionate about maintaining quality and providing a unique boutique service, which often includes collaborating with clients at the pre-production stage and offering technical consultation and planning services. HotCam UK is based in a West London location ideal for its U.K. and foreign clients. HotCam NY is based in New York.