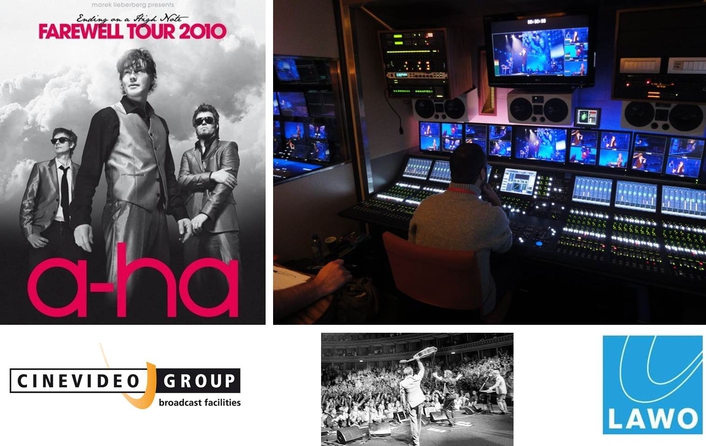 Cinevideogroup OB uses mc²66 to record final concerts
The last notes of A-Ha’s 25-year career have been recorded for a special DVD release by long-time Lawo customer Cinevideogroup, using the mc²66 in its flagship mobile production vehicle, OB14. Ironically, although it is A-Ha’s farewell concert, it is their first-ever live DVD.

The final four shows of the “Ending on a High Note” tour were played in the band’s home town of Oslo at the famous Spektrum venue. Leading broadcast facilities company Cinevideogroup was called in by film-makers Serpent Productions and director Matt Askem to provide a 10-camera HD recording of the event, complete with digital audio, for future release.

Inside the sound control room of the state-of-the-art OB14 were British sound engineer Toby Alington, well known for his work on the BRIT Awards and MTV Europe Awards, and Huub Lelieveld, Cinevideogroup’s senior audio engineer. Alington has responsibility for the final 5.1 mix of the project, while Lelieveld was responsible for the multitrack recording in Oslo.

Under their fingertips was the 56-fader Lawo mc²66 console, one of four in the Cinevideogroup’s mobile fleet, connected through MADI fibre optic lines to remote Lawo preamps on the stage some 50 metres away from the truck. By using fibre optic and local PA power for the Lawo stagebox, Lelieveld removed the need for an active splitter, thus giving him clean capture of the signal from band and crowd microphones.

The live performances were recorded to a Merging Technologies 128-channel Pyramix multitrack system, connected via MADI, with a redundant PC with RME MADI cards running Reaper, just in case. “There is no room for error in this process,” comments Lelieveld. “If we make a mistake with the music recording, then the video will be useless.”

Lelieveld created a temporary stereo mix for Alington and the video editors on what he called “my console of choice.” He expressed a strong preference for the mc²66 over other leading designs, especially when the going gets tough. “This is really the only console where you can change everything while you’re live. It is completely flexible, which means that there is no need to set everything up beforehand, even when one is recording for a live TV broadcast. Whatever changes, the Lawo mc²66 can adapt to it perfectly, and the sound quality remains really excellent.”

His words are echoed by Toby Alington, who is a newcomer to Lawo console design. “I found it to be a very clean-sounding desk, perfect for our purpose, and I was impressed by its very logical layout. All digital desks are laid out completely differently - it’s not like the days of analogue! Some surfaces are deeply unfriendly while others are a joy to work with. Some consoles have almost everything on the centre panel, whereas the mc²66 offers a good ergonomic balance, with the right amount of knobs on each channel, so the visual feedback is very good. Also I had the advantage of Huub, who knows it inside out!”

In the Spektrum, copper multicores were run to the roof catwalk so that Sennheiser MKH-416 microphones could be suspended over the crowd to capture audience reaction. Crowd and band microphone inputs totalled 64 channels, but, according to Lelieveld, that’s hardly a stretch for the 28-8-24 fader mc²66 which offers easy extension.

“As long as I’ve been using the console, I’ve never reached the limit. I think we have enough DSP for 150 channels, but the wonderful thing about the I/O system is that it is fully modular, so you can add what you need. I have done DVD recordings with 140+ inputs and, for these larger projects, we just add extra inputs.”

Cinevideogroup now has four OBVs carrying Lawo mc²66 digital audio consoles, the first of which was installed five years ago. OB14 is its largest vehicle, designed for big music events and sports productions. All onboard routing is handled by a Lawo Nova 73 HD which offers 96kHz operation.

Toby Alington will complete the surround sound mix for the A-Ha DVD at Richmond Studios Post-Production in London.

Lawo, headquartered in Rastatt/Germany, specialises in developing, designing and manufacturing mixing consoles and matrix systems for radio and TV broadcasters, as well as for use in live events. Standards of high quality and innovative technology are supported by decades of experience in the field of professional audio technology. In 2010, the company celebrates its 40th anniversary.
Lawo’s product range covers digital audio mixing consoles for use in radio, broadcast, production and live applications, including the required software. In addition to the provision of matrix systems and audio networks, Lawo also carries out project engineering tasks and acts as a main contractor for radio OB trucks; these services include user training and maintenance. This high level of expertise results in a comprehensive support service for Lawo customers