This year’s MTV EMA Awards, held at Rotterdam’s Ahoy Arena on 6 November, marked the 20th year that Britannia Row Productions has supplied the event’s audio requirements. In these two decades the show has presented them with any number of audio challenges, but the team, formerly led by the late Derrick Zieba and more recently by Colin Pink, has always delivered on all audio fronts. For the past 14 of those years, they have had the support of Sennheiser, both in terms of equipment and technical assistance.

With increasingly RF-heavy environments, the use of Sennheiser equipment, particularly products such as its flagship Digital 9000 Series, which was used by the presenters including US singer Bebe Reixa, has proved increasingly important.

Eight channels of Digital 9000 were on hand for the guest presenters and award acceptance speeches (“On top of their great sound, they have unbelievable handling noise rejection”, says Colin Pink), with 12 channels of EM 3732-II and SKM 5200 and 18 channels of 2000 series handheld microphones being used by artists including Zara Larsson, Shawn Mendes, Kings Of Leon, and Bruno Mars, who had over 30 channels of his own 2000 Series IEMs.

“Shawn is a regular Sennheiser user,” says Andrew Thornton of 24/7 Productions (UK) Ltd and USA Inc, Shawn’s production company. “On shows such as this, knowing that we have the equipment’s reliability, coupled with the Sennheiser team being on hand, makes our lives much easier.”

“The set design in Rotterdam spanned over 80m of the arena floor,” explains Brit Row’s Lez Dwight. “The stage layout had multiple performance areas – four stages side-by-side on the diagonal across the arena – as well as a ‘floating stage’ which flew above the audience, lifts, a projection dome and one band playing in what could only be described as a monsoon water effect!” 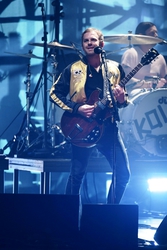 “The downside of this visually stunning environment was that we had a massive area to cover with over 100 channels of IEM and radio mic systems,” adds Colin. “On top of this we had to integrate a couple of guest artist’s own RF systems, not to mention the Red Carpet show, press systems, etc,” adds Colin. “To say there was a full RF spectrum would be an understatement.

“Obviously this needed great planning, and having Andy [Lillywhite] and Phil [Cummings] from Sennheiser working alongside the Brit Row team was massively reassuring to me. If anyone could get the job done, they could, and did. Needless to say Sennheiser’s systems performed flawlessly and the show went off without a hitch.”

“We have a long-standing relationship with Sennheiser and their support on our large-scale, live-to-air broadcast music shows is absolutely fantastic,” says Lez. “Having Andy and Phil with us for the EMAs adds another layer of technical support and gig knowledge that is second to none.

“As the years have gone by, the demand for RF equipment in our industry has steadily increased. What used to be a few bands having IEM systems and microphones on their riders has become a standard requirement. Shoehorning a dozen bands and presenters into one space is a very common request for us. Thanks to our RF crew and the presence of Sennheiser, we delivered once again for MTV.”

“The show was a great success, with Sennheiser users Shawn Mendes picking up Best Male, Zara Larsson Best New Act, The Weeknd Best Video, Drake Best R&B and Little Mix Best UK & Ireland Band,” concludes Phil Cummings, Sennheiser Artist Relations Manager. “It was great being at MTV with Brit Row, we had a great line up, with seven out of the 11 performers being Sennheiser users, and we also managed to catch up with a lot of engineers in one place. It’s always great being part of the crew for a live TV show.”

About Sennheiser
Audio specialist Sennheiser is one of the world's leading manufacturers of headphones, microphones and wireless transmission systems. Based in Wedemark near Hanover, Germany, Sennheiser operates its own production facilities in Germany, Ireland and the USA and is active in more than 50 countries. With 19 sales subsidiaries and long-established trading partners, the company supplies innovative products and cutting-edge audio solutions that are optimally tailored to its customers' needs. Sennheiser is a family owned company that was founded in 1945 and which today has 2,750 employees around the world that share a passion for audio technology. Since 2013, Sennheiser has been managed by Daniel Sennheiser and Dr. Andreas Sennheiser, the third generation of the family to run the company. In 2015, the Sennheiser Group had sales totaling €682 million. www.sennheiser.com