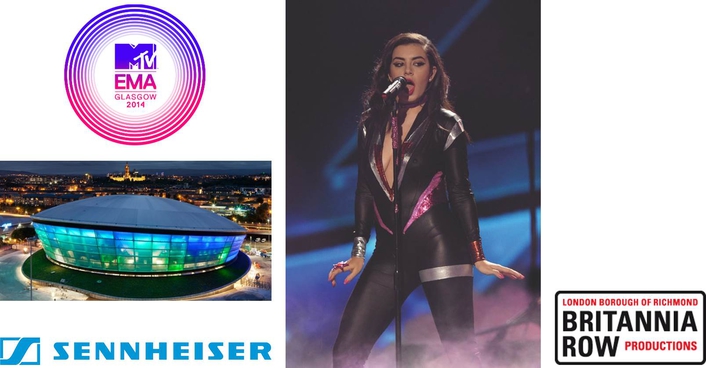 Charli XCX performs during the MTV EMA's 2014 at The Hydro on November 9, 2014 in Glasgow, Scotland.
Held at the beginning of November in Glasgow’s The SSE Hydro, the 2014 MTV EMAs was, as always, one of the biggest nights in the music calendar. For the 12th consecutive year, Sennheiser UK supported Britannia Row Productions in its provision of audio equipment for the event.

The two-hour spectacular was hosted by Nicki Minaj and saw performances from artists including Ed Sheeran, Ariana Grande and Charli XCX. Ozzy Ozbourne hailed as ‘global icon’, three awards went to boy band One Direction, and amongst others there were wins for Ariana Grande for Best Song and Best Female, Just Bieber for Best Male and 5 Seconds of Summer for Best New and Best Push Act. 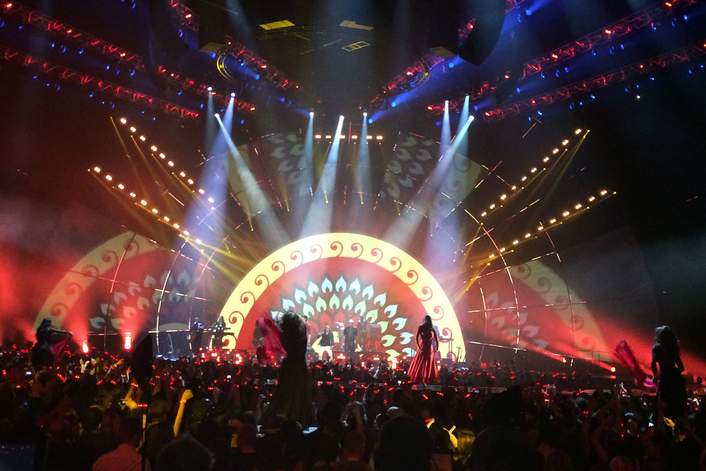 All presenters, including Nicki Minaj, used Sennheiser’s flagship 9000 series handheld microphones, whilst all performer and presenter IEMs, with the exception of one act, were Sennheiser 2000 Series. Additionally, Ed Sheeran used an SKM 2000 with 9235 capsule and SK 2000 itar radio pack, Ariana Grande and Charli XCX had SKM 5200s with MD 5235 capsules, Kiesza an SKM 2000 with 935 capsule and Simon Neil of Biffy Clyro using an e 945 wired mic.

As well as her hosting duties, Nicki Minaj took to the stage to perform the debut of her new single Bed of Lies using an HSP 4 wireless headworn mic with SK-5212 transmitter.

For the first time Live Sound Supervisor for the show was Colin Pink, who took on the double challenge of filling the very large shoes of Derrick Zieba and working with an acoustically difficult venue.

“The Hydro has a tricky acoustic, because it is basically a circular building,” Colin explains. “With this in mind, the entire set design was in the round, with the PA following suit instead of using traditional left/right hangs.

“We had six hangs around the edge of the stage so that we could distribute the sound in a more even way. We also encouraged the artists to go in-ear, because when staging in the round, there is always the fear of the reflections off the walls making wedge monitoring very difficult. 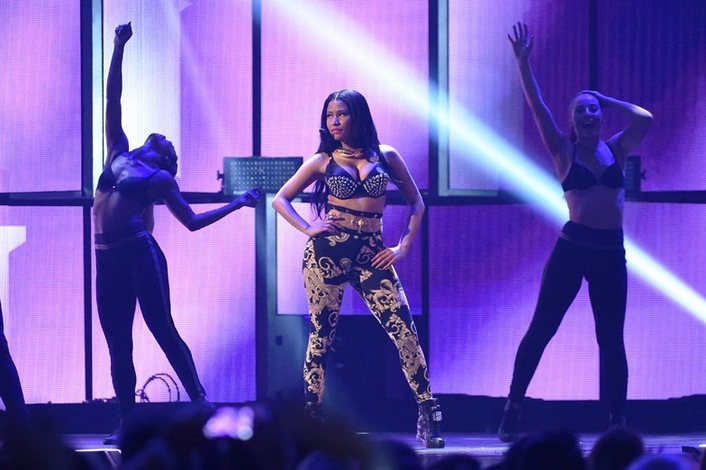 “The Sennheiser UK team was fantastic at supporting us to make this easier. They provided all required IEM systems, which were very well received by the artists, both for their sound quality and their RF coverage.

“They also provided us with a number of SKM 5200 handheld mics. These worked very well, even when a singer was flown within meters of the front of a PA hang.

“The Presenters all used the fantastic 9000 Series handhelds. These mics have amazing clarity and their rejection of handling noise is second to none. The show was a big success. My thanks goes to Sennheiser’s Mark Saunders and the rest of the team for their help in making it run smoothly and sounding great.”