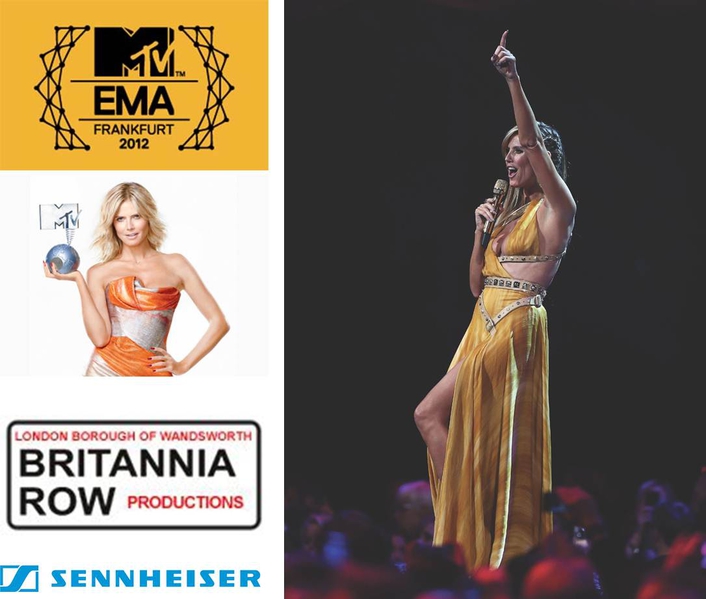 The Festhalle provided a relatively uncluttered and RF obstruction free environment, so placing radio microphone receiving and IEM transmitting antennas - one of the most critical factors in achieving satisfactory RF performance at any large event - was fairly straightforward.

“Thanks to some advance homework regarding the available spectrum, RF Supervisor Sapna Patel had a lot of the frequency allocations and coordination under control,” says Andrew. “A number of acts were 'self-contained' as far as their RF requirements were concerned, but of course on an event like this that actually means a lot of extra frequency coordination and considerable cooperation between artists’ engineers is required, all of which was achieved.”

“The real RF challenge was that presented by Psy's planned performance. His Gangnam Style performance started outside the rear of the Festhalle on his 'beach', then progress through the scene dock and up the ramp backstage, past monitor world and finally onto stage,” explains Andrew. “This meant that the first minute of his performance would be well and truly outside of the normal RF coverage requirements of the main and presenter stages, yet the performance needed to transition through all the various areas in one continuous action.

“I had an idea that a little trick of the trade known as an on-frequency-repeater was the solution and had brought along the necessary elements of such a system. Once assembled and deployed, with a bit of fine adjustment the required coverage was achieved and both rehearsals and performance went off without an RF hitch.”

"The winning support combination of Andrew Lillywhite and Mark Saunders has helped transform a complex RF show scenario in a foreign land into an almost effortless and totally faultless performance,” says Derrick Zieba. “Working alongside my RF Supervisor Sapna Patel, they worked as a team to ensure the highest RF performance was achieved for all artists on the show.

“Once again, as the Live Sound Supervisor on the MTV EMAs, I am secure in the knowledge that we have world-class support from a team for whom failure is never an option."

"Reaching our tenth year at the MTV show, supporting Brit Row and the show’s sound designer Derrick Zieba, has been an important milestone for Sennheiser UK,” concludes Mark Saunders. “Both Andrew Lillywhite and I have worked on all ten events and that has seen us support a lot of acts and engineers. The ever changing requirements, and the pushing of the performance of the Sennheiser microphones and IEMs over the years at these huge events, has been invaluable. It seemed appropriate that the next generation of product from Sennheiser, the Digital 9000 Series radio mic system, was on site this year for evaluation and demonstration to the engineers and crew that were there."