MTV EMAs Kings of Leon
The 2013 MTV European Music Awards (EMAs) enjoyed all the usual spectacle of one of the music industry’s highest profile events. But amongst this, the sound department was enjoying a quiet revolution of its own thanks to Sennheiser equipment - notably the new Digital 9000 Series microphone system, which was making its MTV debut.

Taking place at Amsterdam's Ziggo Dome on 10th November, the EMAs included performances by Eminem, Miley Cyrus, Bruno Mars, Icona Pop, Katy Perry and Kings of Leon, all of whom used Sennheiser 2000 series in-ear monitors and a combination of Sennheiser 5200 or 2000 series wireless microphone systems, except Kings of Leon who opted for MD 431 wired mics.

Two of the biggest challenges for sound designer Derrick Zieba were the amount of RF channels needed and that the presentation podium was at the far end of the Ziggo Dome from the performance stage.

“With the number of live performances at the EMAs, it is increasingly complex to manage the RF spectrum because of the ever growing use of wireless mics, IEM systems and guitar packs,” he says. “In addition, we have to supply handheld wireless mics and IEMs for the presenters and winners, so this year we needed well over 100 frequencies. Finding clear, interference-free spectrum with auditorium wide coverage for all is a major task.”

To ensure perfect transmission and receipt of wireless signals - not to mention the best audio quality possible - Derrick chose the Sennheiser 9000 series for host Redfoo and all the awards presenters and winners. Using SKM 9000 transmitters with ME 9004 cardioid condenser capsules and a pair of AD 9000 active antennas relaying the signals to EM 9046 receivers, complete coverage of the whole arena floor was achieved.

As the event is live to air, absolute reliability is a must. With the transmitters operated using BA 60 lithium-ion rechargeable packs, the systems’ accurate reporting of the remaining operating time adding hugely to the confidence of the sound team.

“Being able to utilise the 9000 series for our presenters and winners provided superb audio performance, a remarkable lack of handling noise and allowed us to pick up unwavering RF signals from the presenter podium,” says Derrick. 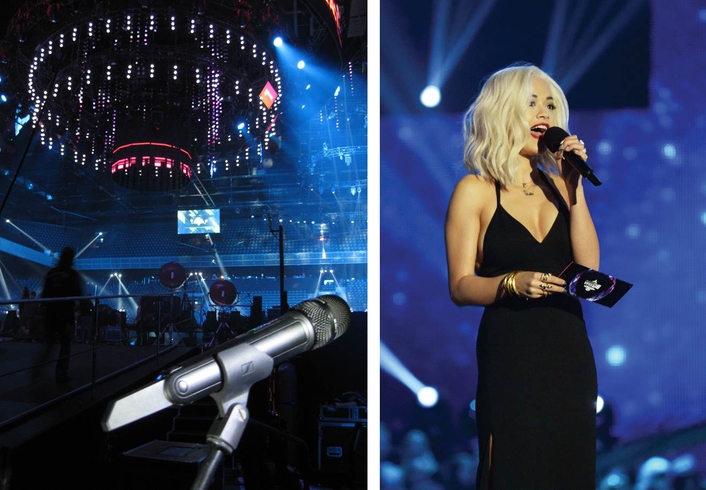 “On a fast paced live television event like this, robust and reliable RF kit is a must. For that reason alone I would choose Sennheiser and, as expected, all of the wireless equipment performed flawlessly throughout,” Derrick adds. “However, having Mark and Andrew helping us to solve any issues as they occurred really helped us to ensure that we ran trouble-free on the night. You couldn’t ask for a better service."