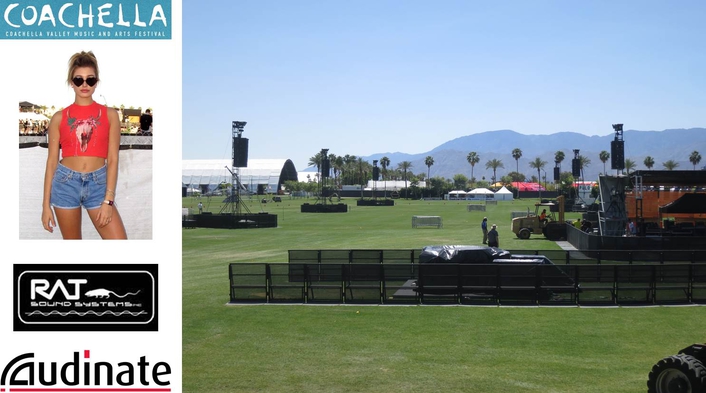 Rat Sound, a leading sound reinforcement specialist for the concert touring industry, integrated a Dante audio network from Audinate at this spring’s Coachella Valley Music and Arts Festival and consequent Stagecoach festival. Faced with the challenge of covering enormous areas of roughly 750 x 1200 feet, Rat Sound simplified the installation by installing a Dante network to ensure robust and reliable carriage of high-quality audio across 21 delay positions. In addition to reducing the labor installation costs, the Dante audio over IP solution provided exceptional performance at the renowned music festival.  The annual festival featured over 200 artists and attracts several hundred thousand fans to the desert climate of Indio, California over two subsequent weekends every April.

According to Tom Worley, full-time systems engineer and front-of-house technician for Coachella, Rat Sound has used Dante for three-years running as it’s proven to be both reliable and versatile for networked audio across large spaces.

“As an Audio over IP solution, Dante is easily the most cost-effective and efficient way to deliver audio to more than 100,000 festival goers,” said Worley. “Dante is also the best choice to carry the audio given the distances between delay positions. And as the stages are so close together, with Dante we can ensure that the delay systems aren’t affecting other audience areas throughout the festival grounds.”

The Rat Sound configuration included festival and guest consoles, each matrixed at front of house via two Yamaha DME64N digital mixing engines. The DME64Ns routed AES, analog and Dante outputs to more than 24 destinations, while integrated MY16-AUD Dante cards generated the primary and secondary audio path for optimal redundancy. Rat Sound added an off-the-shelf, managed switch at the center of each delay ring to network the Dante audio and amplifier control system. The Lake LM44 processor converted the Dante audio to AES for delivery to the delay amplifiers, with a daisy-chained architecture between all delay rings and additional destination points.

Worley adds that Dante’s simplified deployment and ongoing of use thanks to a nearly effortless integration process, with flexible reconfiguration of network parameters as needed.

“We were able to install all the delays and infrastructure in a single day, which left us with valuable time to time-align and fine-tune the delays network-wide,” said Worley. “And while it was a static configuration for both festivals, we had the ability to quickly configure stereo delays using Dante per one band’s request. The flexibility of being able to route audio anywhere in the network gives us greater control of the festival site.”

“But one of the great advantages for us using Dante is the quality of audio and headroom available on the network,” he continued.  “Dante helps us achieve very clean, low-latency audio right into the amplifiers. And it gives us the flexibility and redundancy that we need for one of the world’s biggest festivals.”

Audinate revolutionizes A/V systems to enable our customers to thrive in a networked world. Audinate’s Dante media networking technology has been adopted by the leading OEM manufacturers and the dominant networking technology in the professional audio/visual industry. Dante is used extensively for live performance events, commercial installation, broadcast, recording and production, and communications systems. Audinate offices are located in US, United Kingdom and Australia. Visit www.audinate.com for the latest news and information on the company. Dante is Digital Media Networking Perfected.