.
Fans making the trek to the 14th annual Coachella Valley Music and Arts Festival arrive with high expectations, not least of which is that they’ll be fully immersed in musical performances that inspire all their senses. That expectation levies tremendous pressure on the musicians and crew that put their reputations on the line as soon as the first note sounds.

The roster of talent at Coachella 2013 was dotted with seasoned acts the likes of Sigur Rós, New Order, Blur, Dead Can Dance, Jurassic 5, Social Distortion, Dinosaur Jr., Descendents, and Violent Femmes, as well as solid newcomers like Band of Horses, Franz Ferdinand, The Postal Service, and Of Monsters and Men. These bands delivered critically acclaimed performances that thrilled the thousands of fans that packed the venue over two weekends.

While most bands brought their own front of house and monitor engineers along for the show, Camarillo, CA-based Rat Sound Systems supplied audio systems and technicians for the 14th consecutive year. Coachella 2013 marked the third straight year that Rat Sound exclusively used Avid live systems, bringing in 10 Profile systems for each of the festival’s five stages. “The consoles remain the most popular and familiar consoles on the market today, plus they are cost effective and reliable and that’s why we keep using them,” reports Rat Sound’s touring systems coordinator Jon Monson. In addition to the Profiles, Hi-Tech Audio supplied a pair of Pro Tools systems for engineers to use on the Main and Outdoor stages as needed. 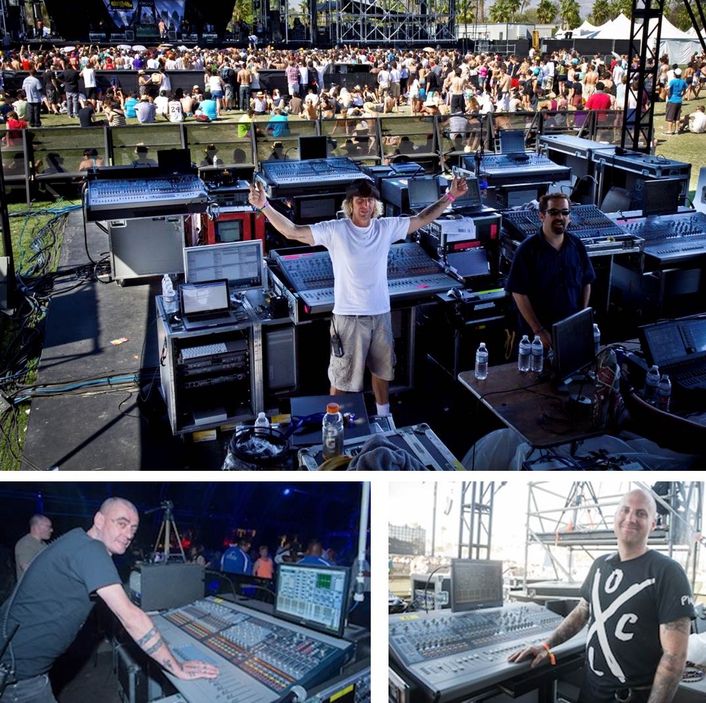 Walk up, load the show file, line check, and go
Of the 175 bands that played at this year’s two week festival, all but seven utilized the supplied Profile systems, and many engineers also moved a Profile to the monitor position. On three of the five stages, Monson explains, there was an A/B dual console setup. “All of the bands were patched as their input list was submitted,” he explains. “So, an engineer can literally walk up, load their show file, line check, and go. There was no need for them to send in files in advance and as long as their file matches their paperwork—that greatly reduced the advance pre-production we had to do. All we need them to do is patch two or three outputs and off they went.” There were a few stages, he adds, that were running “festival” style. “For those stages,” he says, “we have the artists submit files in advance and we soft-patched them to conform to our festival patch as needed.”

For many engineers, having a console and system they were familiar with was a lifesaver. That was especially true for Band of Horses’ front of house engineer Stephen Taylor when he stepped up to mix the band at the Outdoor stage. “The first weekend we played Coachella I was hanging out, learning the ropes,” he says. “The second weekend was only my second gig mixing them. [Having the Profile] was the saving grace. If I had come in on a board that I wasn’t familiar with, it would have happened, but I wouldn’t have been as comfortable as I was, especially at that first song.”

Taylor’s first exposure to Avid came while he was mixing Pete Yorn in 2006. “We were out with the Dixie Chicks and their FOH guy was a hotshot. He had a D-Show out,” he recalls, “so I had to learn it very quickly. I was kind of set in my ways with analog, but I picked it up within a few shows and by the end of the run I was loving it.” 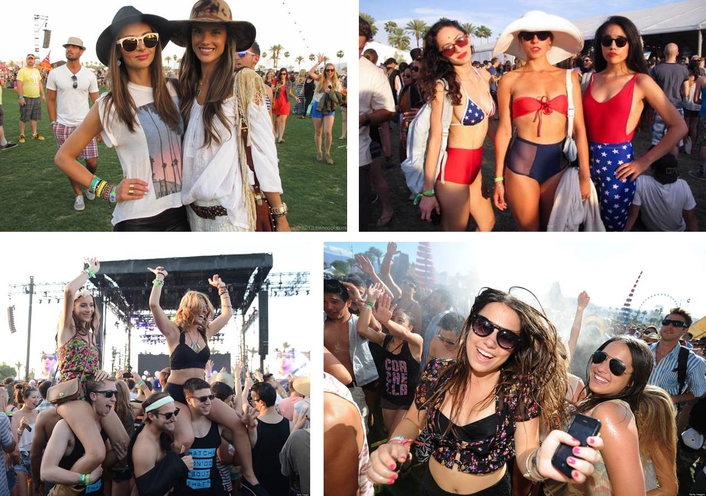 He has been an Avid believer ever since for several reasons. “It sounds good, I can use all the Waves plug-ins on it and the tools that come with it are fairly endless in my mind,” he says. “And, I can go almost anywhere in the world and get a Profile, so I can travel with a USB key, an iLok, my iPod and headphones, and go anywhere. That is huge. I work with bands that are not big enough to carry their own gear, but big enough to go crazy places.”

The flexibility and power of the Profile enabled Taylor to mix the way he likes to mix, especially as he was learning the band. “I get up there, move the faders and feel the heart of the song,” he explains. “The first night I was listening for the emphasis of the song. Was it a piano song? A guitar song? How many harmonies are going on? With the Profile, I will take snapshots for myself as notes. Then, I’m constantly going to different banks and changing parameters for this or that. I’m a fiddler. I enjoy that. It’s amazing that all that technology can bring it together and help it sound amazing and it’s great that you only have to worry about your specific gig, it doesn’t matter what anyone else is doing.”

Everything at your fingertips
Lee Mayeux, who has been handling front of house responsibilities throughout 2013 for The Neighbourhood during tours across the United States, Australia, Canada and the UK, was happy to see a Profile on the Outdoor stage FOH position. “I had been winging it from show to show,” he admits. “Whatever they had at the venue, I used this year. I traveled with my own mics, DIs and my own in-ear rig, but other than that, it was flying by the seat of my pants. I prefer to work on an Avid board.” 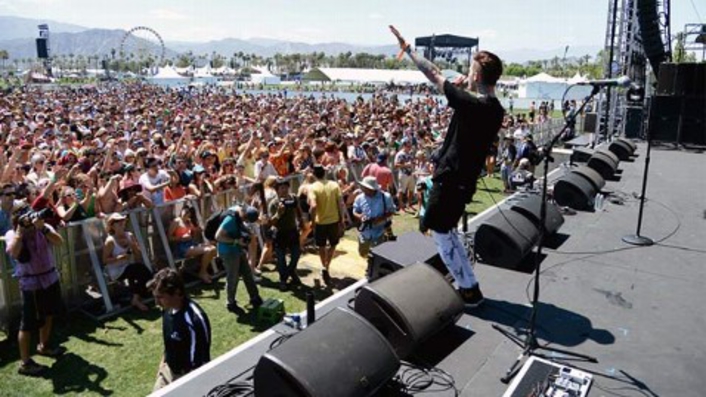 One of the reasons that is so, Mayeux reports, is because he is a veteran Pro Tools user. “So, the functionality of the Profile, the way the plug-ins are similar and having everything at your fingertips, right there in front of you feels comfortable to me. A lot of digital consoles are hidden with layers and layers and you don’t have the meters you need right in front of you at the time. The Profile and SC48 are really good at having what you need to see right in front of you.”

Mayeux had the opportunity to use VENUE Link for the first time at Coachella, which was important because he was working with backing tracks that he helped produce with the band. “It helps them achieve what they want live,” he explains. “I like to mix by vibing with the music as much as possible and then help it go where it needs to go in certain areas. A lot of times it’s fine by itself, but if you add a little sauce here or there it really draws the attention to the moment.”

He prefers to travel with a USB stick and use saved scenes rather than bringing plug-ins along with an iLok. In fact, earlier in the year he took the time to write show files on his Apple MacBook Pro and then transferring it to an SC48. When the band started to book festivals, Mayeux took it back into the computer and created a clean file. “When I walk in [with my USB stick] and see a Profile, it takes a lot of my worries away since I know where I’m at on the console and that I have everything I need on every channel.” 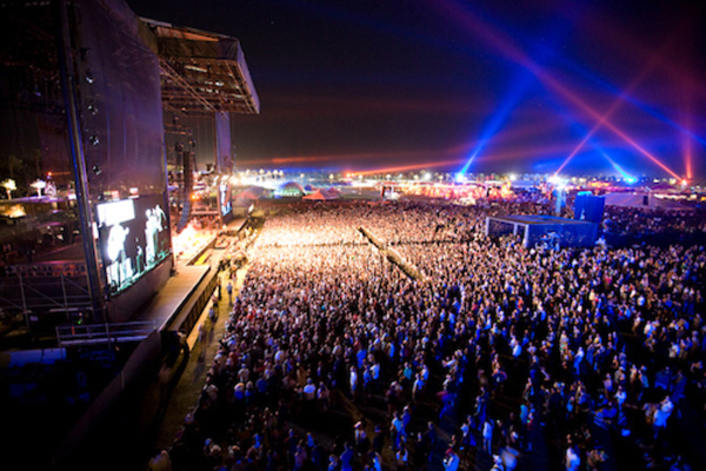 That enables him to provide better mixes for band and audience alike. “I feel that I can get more comfortable and therefore more sophisticated with my mix,” he says. “Plus, with the [VENUE] software, I can set an EQ and pop it on or off quickly and efficiently and I don’t have to sit there with a patch bay. At festivals, patches can sometimes be all over the place. But, in a pinch, it can be sorted out much quicker and more efficiently. Whether it’s an input not being correct or wanting to adjust the length of the ‘verb, everything is at our fingertips.”

Given the band’s recent run of shows and festivals, Mayeux has been forced to use a wide variety of consoles. “I’d walk in and see a different digital console with older software of even a smaller 16X2 mixer with four auxes and it’s like, ‘What’s going on here?’” he says. “You have to be able to work on your feet, but when you’re able to work with this level of technology and be able to bring this kind of professionalism in this small of a footprint, it’s priceless in the festival world.”