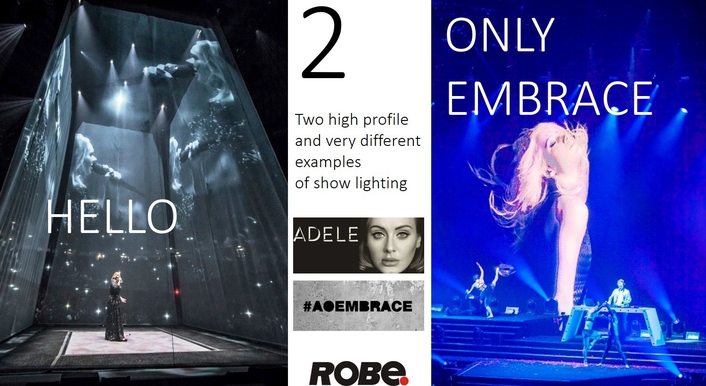 Robe was one of the first manufacturers to start producing multi-purpose or hybrid fixtures with the launch of The Pointe in 2013, followed by its signature BMFL range of fixtures, the first of which hit the market in September 2014. Both BMFLs and Pointes being seen on a wide variety of tours, shows and events worldwide … they are being specified by leading lighting, visual and show designers and invested in by rental companies of all sizes.

The first is Adele’s ‘Hello’ world tour which utilises many BMFLs in an elegant and interesting stage presentation, underscoring her position as a global singing superstar of our time.

A complete contrast is the launch of Armin van Buuren’s incredible ‘Armin Only Embrace’ world tour, which kicked off at the Amsterdam Ziggo Dome, combining the aesthetics of EDM and theatre into high impact visual presentation to support his incredible 4 hour musical extravaganza which explores trance in the context of so many other musical genres … with a little help from a large number of Robe Pointes! 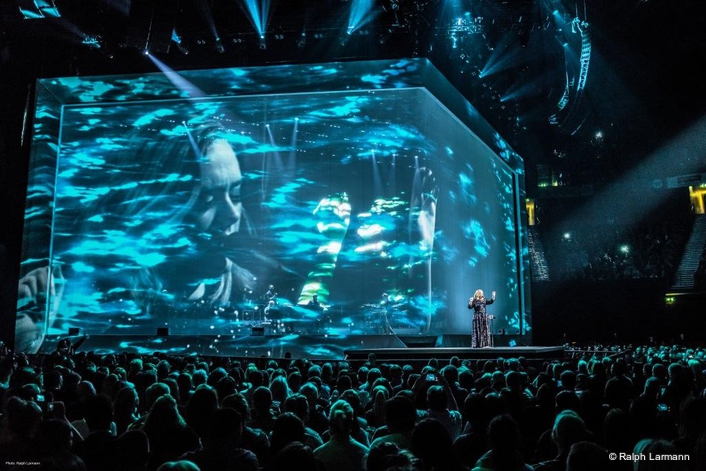 The extensive tour, which garnered huge critical acclaim, followed the release of Adele’s record-smashing third studio album, 25, in November 2015 which established her as one of the most successful recording artists of all time. 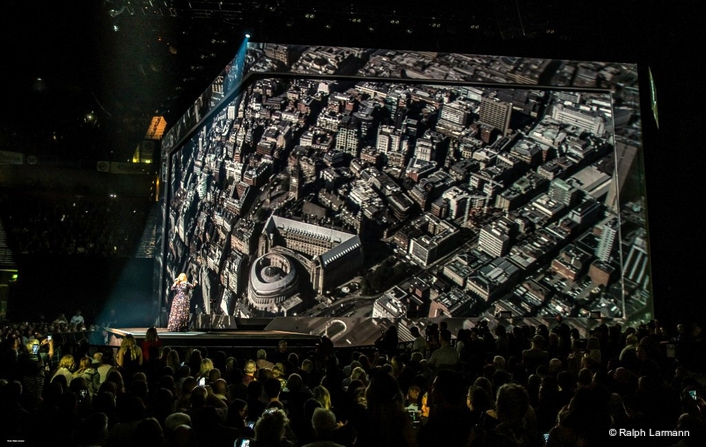 Lighting operator / director on the road was Roland Greil and the equipment for the UK and European legs of the tour was supplied by west London based rental specialist, Neg Earth, with Upstaging delivering the rig in the US.

They provided the main backlight and profile effects and were utilised extensively through the set for theatrical mood-setting as well as potent, edgy, back-light looks, and were chosen as an appropriate high powered profile fixture to fulfil this element of the design. 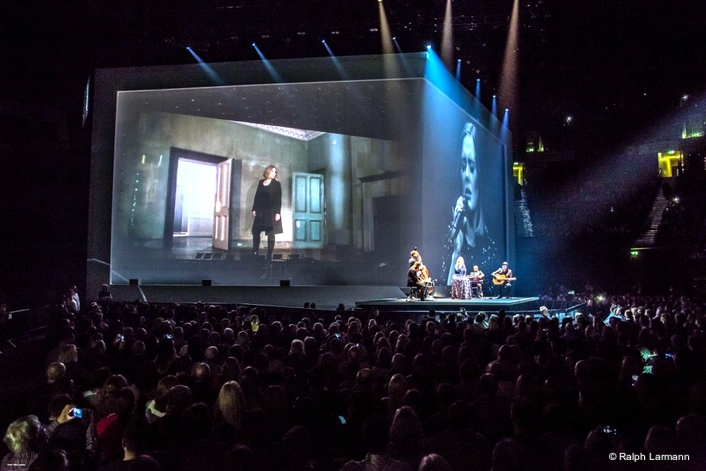 Patrick worked closely with creative director set designer Es Devlin and video content producer Lizzie Pocock from Treatment on crafting the show’s elegant visuality. “It was clear from the beginning that this was to be a stylish, timeless show with much of the dynamic coming from the video content,” explained Patrick.

A unique aesthetic for the tour was evolved over a three month period that preceded production rehearsals at Wembley Arena, during which time they - Adele herself and her creative team - were engaged in several high profile TV and Awards events including The Grammy’s and The Brits, plus a TV special at Radio City Music Hall in New York. 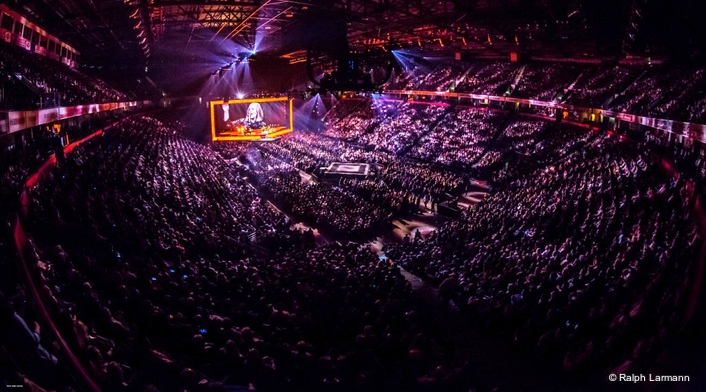 “We decided to make a statement by not using any saturated colour in the show,” says Patrick, a technique applied right to the end with the exception of a single cue - in red - during Skyfall, which had incredible impact and emotional intensity.

The set featured an unusual V-shaped stage front accentuated with an internally lit lighting frame. A series of gauzes and screens flew in and out across different planes working either together or individually to vary the depth and dimensions of the performance space. The B stage in the centre of the auditorium is also surrounded with gauzes that magically appear and disappear as the set unfolds … together with the much talked about four sided rain curtain, which was a big hit with the press! 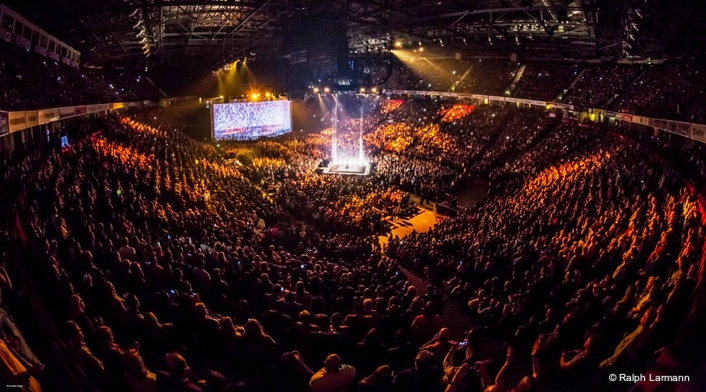 Roland operated the lights using a grandMA2 full size console which he programmed during production rehearsals and joining him on the road were lighting crew chief Chris Davis and systems tech Luke Radin, who are contracted by production for the whole tour. For the European legs, Neg Earth provided Jim Mills on dimmers and lighting techs Jamie Gorman, James Frederickson and Sarah Janebrink.

Patrick has enjoyed many aspects of this project including the developing relationship that the whole creative team has enjoyed with the artist. “She’s direct, very clear about what she wants, always collaborative, totally unaffected … and very funny. The creative period was a joy for all of us involved,” he concluded.

Central to the energy, excitement and emotion of the 4 hour trance extravaganza in Amsterdam were 162 Robe moving lights – a megamix of Pointes, LEDWash 600s and LEDBeam 100s – among other fixtures crafted into the visual landscape.

Embrace is another truly unique and imaginative immersive musical, visual and sonic experience from the “State of Trance” originator. Based on the new album and its multiplicity of sounds, he and special guests - including impresario jazz trumpeter Eric Vloeimans, rock band Kensington, singers from other musical genres and eight dancers - will stun and amaze fans worldwide.

The world class production values demanded by the show … will be supplied locally. 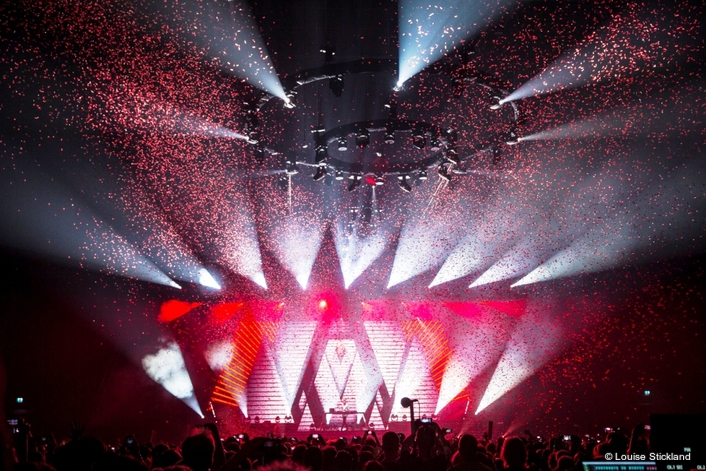 This was one of the practical starting points for the lighting department, comprising LDs Marc Heinz and André Beekmans (The Art of Light) who created the design, and Armin’s long term lighting director on-the-road, Michael Seeverens also from The Art of Light. Marc, well known for his work in the arts and theatre world - was again asked on-board by the show concept / creative director Jos Thie and AO producers ALDA to bring a theatrical vibe to the lighting.

The impressive LED video screen upstage of Armin’s DJ booth was based on the new Armin logo - a ‘closed’ version of the famous A.

Marc worked closely with André, who is founder and lead designer of Eindhoven based creative lighting & programming practice, The Art of Light, and as a design tour-de-force, they collaborated with video director Carlo Ruijgers, ambient / playback video content producers Eyesupply and stage / set designer Sander Reneman from 250K. 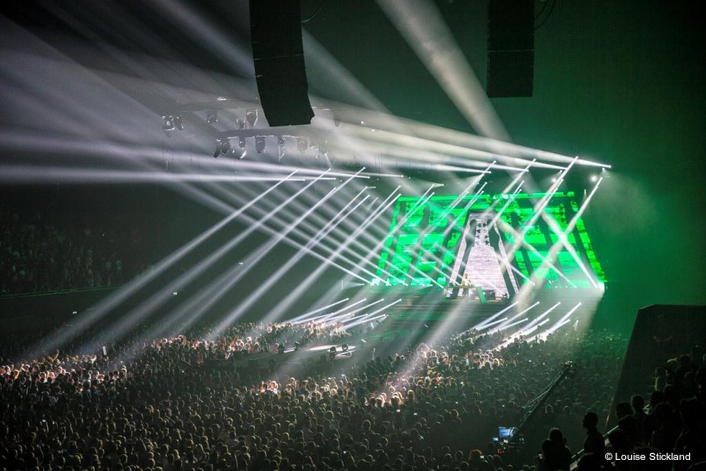 It was clear to see how the synergies of Marc’s theatrical and Andre’s EDM lighting experiences combine, compliment and played out during the show.

The 74 x Pointes were dotted around on the overhead trusses and on the stage floor. Twenty-four were dedicated to highlighting scenic elements around the performance space, while the other 50 were in the grid above the stage and on the stage deck - utilized for all the super-bright, funky effects at which they excel. There was also a run of Pointes above the catwalk encasing it in an A-shaped cage at certain moments.

Taking advantage of the Pointes’ hybrid features, the lights were used as both beam and spot fixtures, opening up another whole round of variety.

The 60 x LEDBeam 100s were rigged on six slanted vertical trusses that extended the A-shape widthways across the stage and wings. 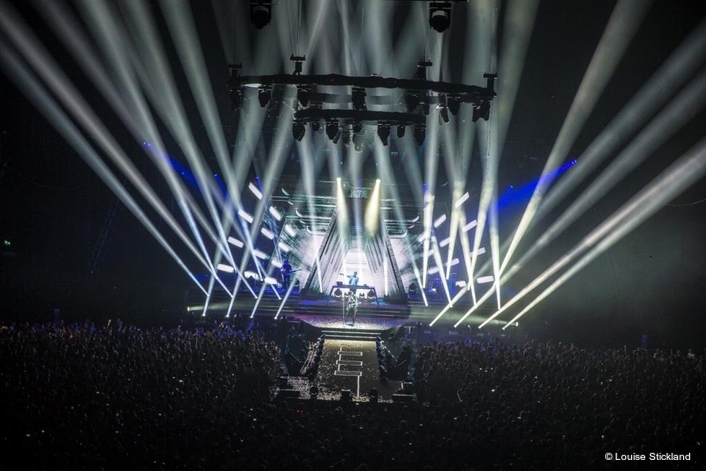 Masking the corners of the screen in keeping with the A-shape involved a perceived reduction in space, so these trusses were partly architectural in function and also allowed the fixtures to sweep out across the arena, scanning the audience and opening out the space.

The LEDWash 600s lit the dancers, with eight on the trusses above the thrust / B-stage and the rest along the edges of the runway below.

The breath-taking results of all these collective imaginations and the innovative mixed-media approach enthralled 34,000 fans at the Ziggo Dome over two nights, and will go on to do the same internationally as Armin and AO Embrace/s the world!

Crafting the lighting design started in August 2015. As always, in addition to the creative demands, Marc and Andre considered how the show is being toured, what equipment is likely to be the most available in different territories, etc.  … and naturally, the budget!

It had to be big, bold and jaw-dropping, make huge statements, be able to support four hours of full-on banging trance performance without looking repetitive and also have the finesse to support and accentuate the different guest sections … and ultimately still not be too complicated or over-fussy so it can work everywhere! 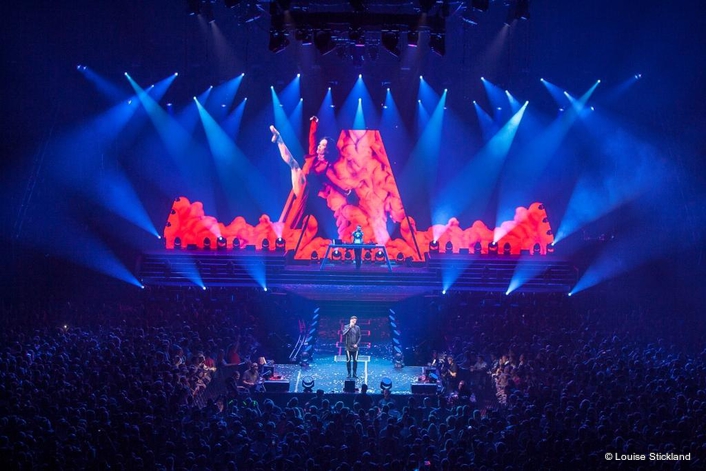 Embrace is also about Armin being close-up and intimate with his audience.

At the Ziggo Dome, a runway / B-stage thrust into the arena and much of the performance action, dancing, etc. took place on here, right in the heart of the fans.

So, with all that in mind fixture choices were influenced by what is likely to be the most available on different continents and what the first or second substitutes are likely to be. This decision alone can be the difference between spending 35 minutes or 8 hours of cloning / fixture swapping and updating the console … before any show programming and tweaking can even start!

Unlike Intense that was 95% indoors, around 50% of the Embrace shows will be staged outside, so the lighting design and specification needed to address this too. “We chose only the most reliable fixtures in our experience” stated Andre, “and this included the Robes”.

Just as the show reveals multiple layers and depths as it unfolds, with the dancers, singers and musicians each adding new dynamic twists to the action, it was important that different areas of the stage were lit as individual spaces with their own definition. The audience is connected further by being lit and drawn into the action. 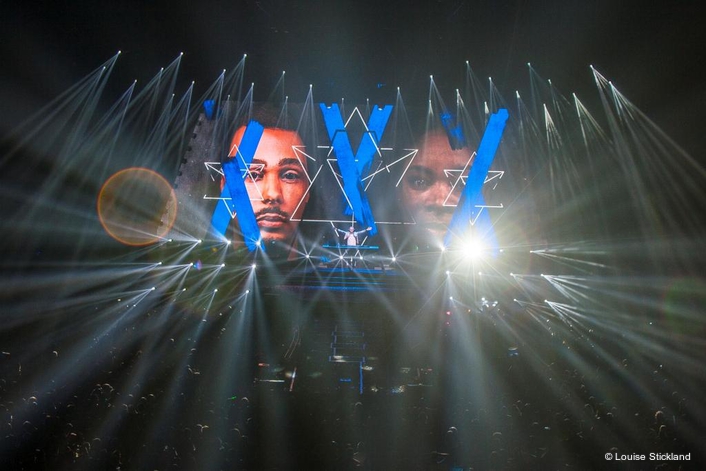 “As a DJ/producer I want to connect people to this world full of inspiring combinations. An endless universe of possibilities is waiting to be embraced. Everything is possible” says Armin … and it seems all the ingredients are in place for another crazy year of AO touring!