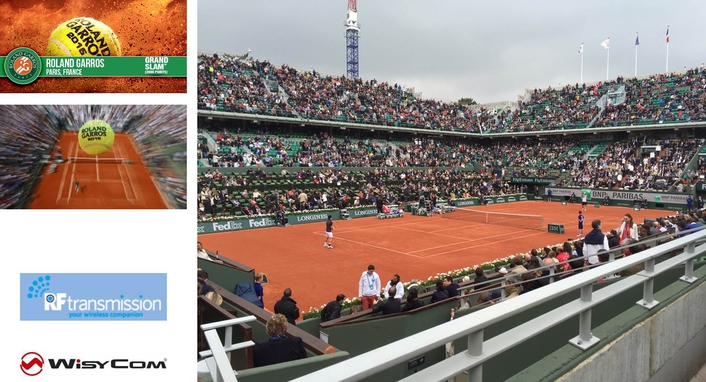 When the world’s best tennis players came together at the historic grounds of Stade Roland-Garros for the 2016 French Open, RF Transmission s.a. was given the daunting task of providing complete wireless coverage for this Grand Slam Championship. In order to ensure there were no double faults in signal coverage, RF Transmission s.a. took the court with Wisycom, designer and builder of the most sophisticated RF solutions for broadcast, film and live production.

“We chose to use Wisycom because the company and its products are known for their high-quality and reliability,” says Bernard Scyeur, CEO of RF Transmission s.a. “The sensitivity, selectivity, RF power and flexibility of the systems made Wisycom the perfect choice. In addition, since the tournament takes place outdoors, the weather resistant and rugged features of Wisycom’s equipment were ideal.”

The MRK960 and an MTH400 was used for the journalist, who was reporting all around the 400,000 square foot site of Roland Garros. The MTK952s and the MPR50-IEMs were used for the journalist’s IFBs, which were transmitted over the entire site. The MAT288 was used to select between the six zones where the journalist was interviewing the tennis players. Some other MRK960s, MTK952s and MPR50-IEMs were used as an extra TV set on the top of the “centre court”. The MFL was used where the wiring needed to keep a low profile and where quality could suffer no compromise. Alongside Wisycom, third-party equipment was integrated at some RF over fibre reception and transmission points.

“The equipment had to be working fault-free from the first to the last day,” adds Scyeur. “We had a two-hour maintenance constraint, so the overall reliability of the system had to be at the highest level possible. The confidence I had in Wisycom led me to choose them over other competitor products. The MTH400 is the only 100mW handheld with Push-To-Talk on the market and the MAT288 is simply the only solution of its kind. I have the utmost confidence when using Wisycom on a project of this size.”

By using Wisycom equipment, Scyeur and his team were able to reduce the total number of antennas due to the receiver sensitivity, low noise of the MAT288 and 100mW transmission power of the MTH400.

“Since the beginning of my relationship with Wisycom, I appreciate the ability to get in touch with all the different services and people, as well as the rapid reaction to emergencies and accuracy of the delivery dates given,” says Scyeur. “I did not need to call Wisycom during the installation as everything worked perfectly. After this experience, I plan to change items in my stock and replace them with Wisycom equipment.”

Wisycom is the Ultimate Ace for Roland Garros 2015
VIDELIO-Events + Utram and Riedel MediorNet Serve Up an Ace at Roland-Garros
Roland Garros 2013: EVS at the Heart of the Broadcast Facilities