Roland Garros 2013: EVS at the Heart of the Broadcast Facilities 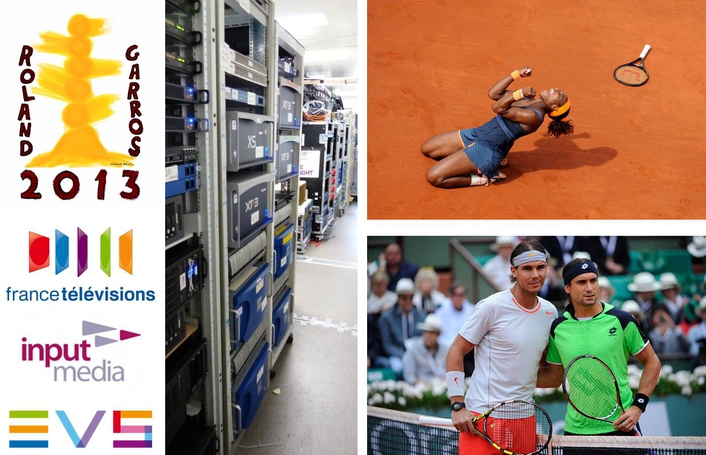 Williams and Nadal in tennis heaven
The four Grand Slam tournaments, also called Majors, are the most important annual tennis events. They offer the most ranking points and prize money, the greatest strength and size of field, and attract the most public and media attention. The Grand Slam itinerary consists of the Australian Open in January, the French Open in May/June, Wimbledon in June/July, and the US Open in August/September. Each tournament is played over a period of two weeks. The Australian and US tournaments are played on hard courts, the French on clay, and Wimbledon on grass. Wimbledon is the oldest Major, founded in 1877, followed by the US in 1881, the French in 1891, and the Australian in 1905.

This Year we had a closer look onto Roland Garros where the tournament took place between 21 May and 09 June and was broadcasted by 76 TV channels worldwide. The world feed was produced by France Television (cameras at the courts) and Input Media (video galleries and server farms). The Tennis Channel, ESPN and NBC had set up its own production facilities to produce unilateral signals relaying on support from Presteigne Charter. 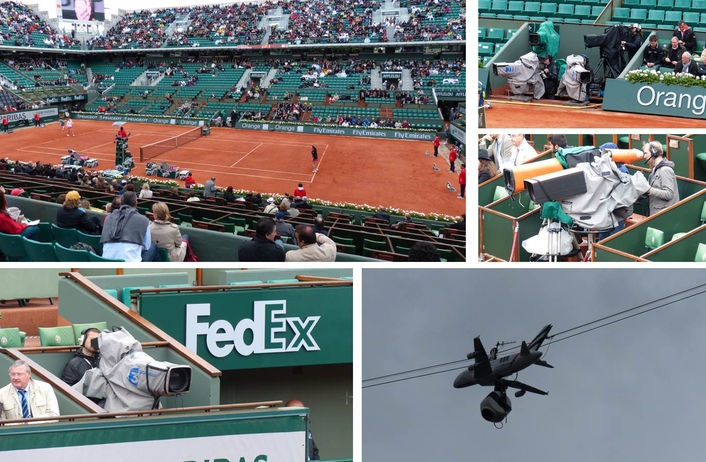 From approximately 50 discrete feeds delivered to the MCR, 15 independent feeds were fed into the EVS servers. Edit suites equipped with Avid Unity MediaNetwork and Interplay MAM systems along with EVS IPDirector were utilized to deliver a daily 52-minute highlights programme that was produced in addition to approximately 10 hours of live coverage per day. The majority of equipment used by Input Media at the French Open had been supplied by Gearhouse Broadcast. 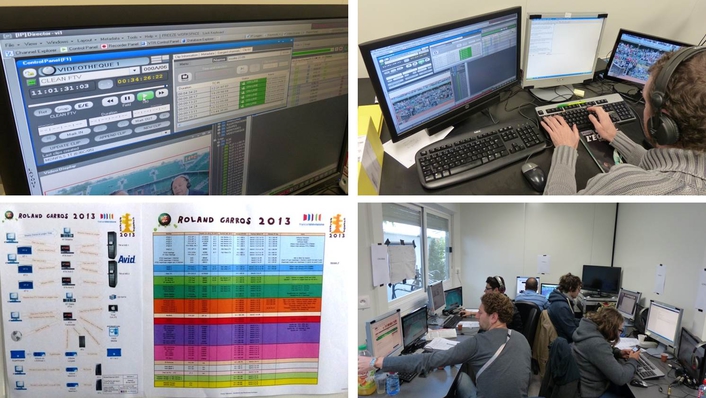 At the FTV logging room EVS’s IPDirector software enabled the crew to execute an average of 300 logs per match. In total, some 14 units of IPDIrector were used across the FTV operation at the French Open, while 20 XT/XS servers were deployed for the live production and ingest of multiple feeds.

The EVS servers were controlled by LSM remote control panels for the highlights creation and live slow motion, as well as by IPDIrector. The content management suitewas also used for live logging, browsing and to send material to Avid systems. In addition, FTV was making use of Nano Air for graphics insertion.

FTV has been running tapeless at this event for six years while maintaining a tape-based workflow in parallel, however future French Opens will be recorded solely to EVS XFile hard disk drives.

Three U.S. Broadcasters at the French Open
The French Open continued to be an example of how U.S. broadcast networks work together and share resources in an effort to streamline costs, give consistency to the productions, and keep a sharp focus on storytelling rather than duplicating work. 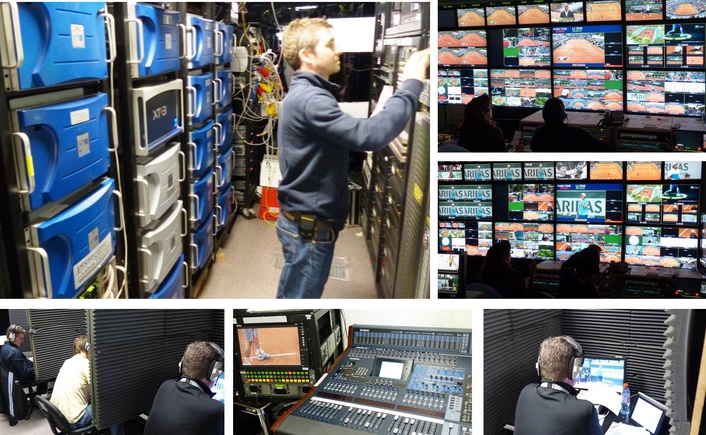 At the core of the effort is a kit provided by Presteigne Charter, which has supplied such kits for Tennis Channel, ESPN, and NBC for six years. The ground floor containd the EVS “engine room,” which pulls in up to 57 feeds, clean and dirty signals from each court. Sam Olsen, senior project engineer, Presteigne Charter, enumerated the EVS complement on hand: 18 XT and two XS servers, 24 IPDirector production-management systems and two Xedio Dispatchers.

Olsen and the rigging team turned up on May 9 for four days of cabling and furniture assembly and laid 11 km of cable during initial setup. On May 14, the remainder of the engineering crew was on-site. The EVS servers were sitting among the U.S. broadcasters and were shared by editors and producers using Avid editing systems to access low-res proxies for clip assembly. 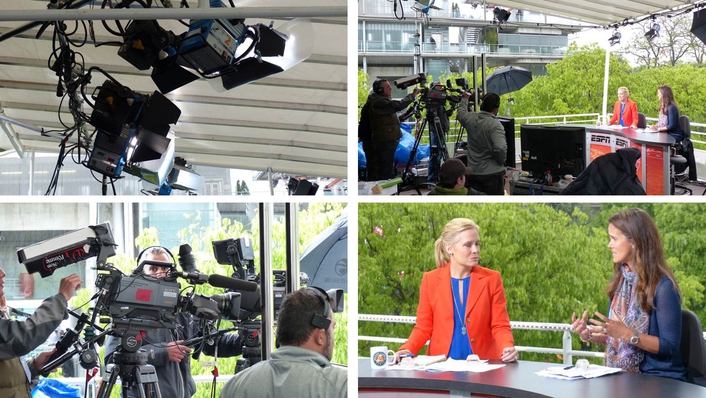 Both Tennis Channel and ESPN had a master-control room, and there was an additional one for Tennis Channel’s French Open Tonight. Each network had its own Avid editing suite. Another common asset was a shared set that could be rebranded to reflect the network using it.

But it was during the exclusive windows when the benefits of the centralized storage system became apparent. If something happened while the Tennis Channel was on-air, for example, ESPN was able to build highlights and offer instant analysis. 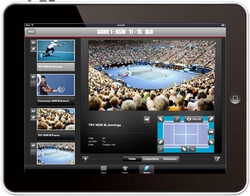 With Tennis Channel handling many of the technical duties, the ESPN team could focus on its editorial needs. And, with Wimbledon next on the schedule, the French Open was an important opportunity for the talent and production teams to round into form.

This year’s French Open also saw Input Media undertaking an interesting test using EVS’s C-Cast additional content delivery technology. Some broadcasters were interested in reducing access costs to the signal distribution chain, therefore Input Media was testing a workflow that incorporated C-Cast to deliver a three-segment highlights program in low-res. Individual takers were able to download the high-res version from the Amazon-hosted cloud service. If successful, the workflow can lead to reduced satellite uplink and access costs. It was the first time the second-screen platform has been used as a program delivery tool.

Input Media took a production crew of around 30 staff to Roland Garros to provide 10 hours of live coverage and a 52-minute daily highlights program for around 50 broadcasters delivering the tournament to 76 TV channels worldwide.

Sharapova fades as Serena took 16th Grand Slam title
To all things there is a season. Last year was Maria Sharapova’s time – the completion of her career on her least favorite surface after so many injury troubles. But the wheel has turned. The defending champion made the final again, but in 2013 the story belongs to Serena Williams. All the action on the court was displayed to thousands of spectators on various video screens across Roland Garros.

Video screens
Spectators had plenty to look at as soon as they got into the stadium. The giant video screen installed on the forecourt in front of Suzanne Lenglen stadium by the east stand was back, measuring 74m2 and was showing live footage and scoring as well as highlights from the previous days, content from the video channel "Roland Garros TV" and a ticker with the latest news from the 83rd French Open. 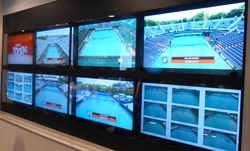 Other video screens were dotted around the stadium, including two on Philippe Chatrier court (measuring 37m2 each) and Suzanne Lenglen court (2 x 15m2). These provided fans with a full information service which obviously included the score of the match in progress as well as a presentation of the players involved, statistics, slow-motion replays, information, clips and exclusive images from the tournament. The giant screen at the Place des Mousquetaires (37m2) to the west of No.1 court enabled fans to watch matches live. There were also four other screens measuring 6m2 providing the public with information, scores and live coverage. These were all located around Philippe Chatrier court. 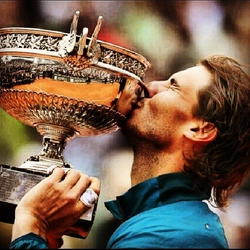 Nadal sailed into tennis history
The creation of tennis history, or the biggest upset in tennis history – this much was inevitable at the men’s final at Roland Garros 2013. With Philippe Chatrier Court all-Spanish territory, it was a day to bear in mind the country’s national motto: “Plus Ultra” - literally, further beyond. In ancient times the declaration was intended to inspire the nation’s explorers to venture beyond the Pillars of Hercules (the rocky promontories flanking the Straits of Gibraltar) and onwards to the New World. With a sense of absolute inevitability, it was Rafael Nadal who steered the course into uncharted sporting waters. He crushed David Ferrer 6-3, 6-2, 6-3 in two hours and 16 minutes to become the first man ever to win eight titles at one Grand Slam. His fellow Spaniard, the oldest first-time Slam finalist in 40 years, was left struggling in the champion’s bow-wave. Like the rain which fell sporadically throughout much of the match, Ferrer could never produce sufficient rhythm to make a conclusive impact.