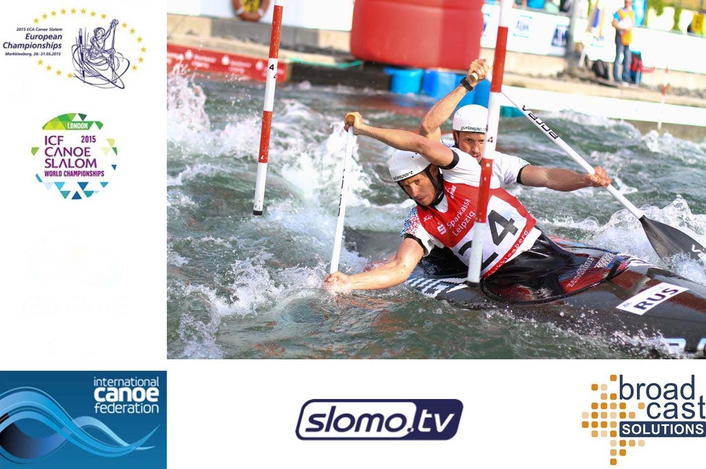 VideoReferee® Use in Canoe Slalom Tournaments

Since the legendary Wembley-goal during the FIFA WC 1966 sports fans all over the world are discussing more and more complicated game situations and wrong decisions. In many sports tournaments decision-making by referees often is facing doubt and distrust. Today fans often have a clearer view using e.g. their smartphones to watch the television signal inside the arena or just by having a better position of view. Every wrong decision and the emotions coming with it are frustrating the fans even more but also the sportsman for sure.

In order to avoid dubious decisions several sports associations decided to make use of technical solutions such as digital video referee assist systems. videoReferee® by slomo.tv is such a specialised solution that helps judges and officials in dubious situations and offers safe decisions.

Why Canoe Slalom?
This feature describes Broadcast Solution's implementation of the videoReferee® system in international Canoe Slalom competitions and its development till its use as the overall video judging tool during the Canoe Slalom tournaments during the Olympics in Brazil. Canoe Slalom is one of the most dynamic and most spectacular boat sports. The aim is to complete in a very short time a white water course and to pass through gates downstream or upstream correctly. The gates should be passed completely without touching the rods. If this fails, the athlete will receive penalty seconds for touching the rods or missing the gate. Whether a rod is touched or a gate has been passed correctly, is often difficult to judge during competition.

In order to assist the referees on the course in questionable situations the International Canoe Federation ICF has implemented video judging systems in international competitions since the year 2007. However, the common technical tools in use often reached their limits because of to little perspectives and available camera signals. Beforehand the simultaneous view of several signals and perspectives was difficult to achieve and obstruct fair decision-making. An unsatisfying situation for athletes and fans alike. 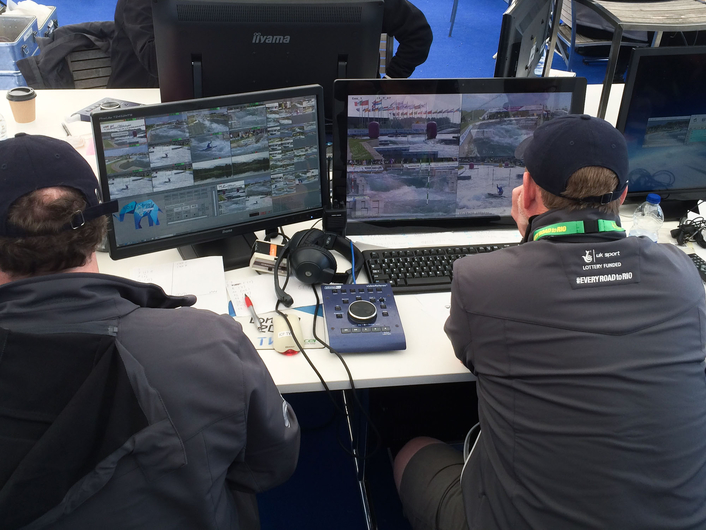 Jean Michel Prono, Chairman Canoe Slalom, International Canoe Federation (ICF) on using videoReferee® during the competition: “videoReferee® answers our needs for a fast review of a situation while the race is still running. It really solves the problems we have with dubious situations.” 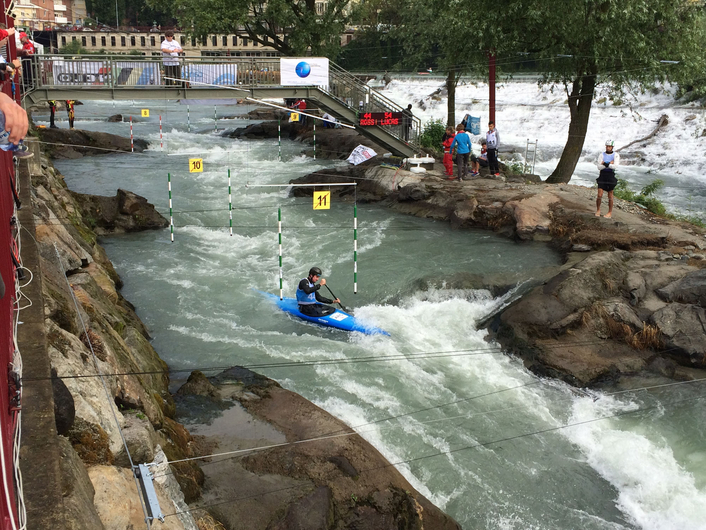 The videoReferee® system used during the Canoe Slalom European Championships proved its flexibility in practical use. It was integrated easily into the existing infrastructure of the event and had access to two signal sources. On the one hand the system used the signals of the cameras already on-site. Additionally, videoReferee® used video signals provided by the local host broadcaster. Using videoReferee® and realising the optimal and best possible coverage of the 270m long race course with up to 25 gates offered the event organizers new opportunities and quality in assessing contentious scenes, never attained before. The recording of all material with videoReferee® provides additional benefit. New ways to use the recorded video material for marketing purposes arise for event organizers as well as sports organisations. 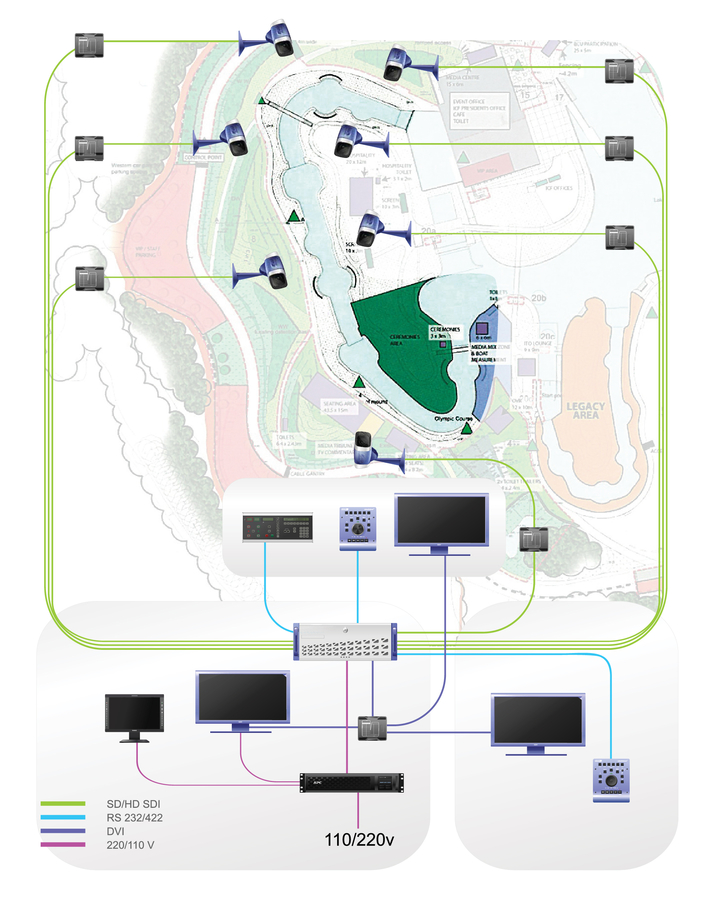 A major step – 2015 Canoe Slalom World Championships London
The second use of videoReferee® took place during the Canoe Slalom World Championships in London. For the first time videoReferee® was used as the main judging system during a World Championship. The event took place at Lee Valley White Water Centre at the outskirts of London. For this tournament a 12 channel videoReferee® and a 11 channel backup system oﬀered reliable and safe decisions during the tournament with 300 athletes from 55 countries participating and thousands of visitors on site and at home. During this second test the system was used already as the main judging system recording the signals of all cameras along the racetrack, what shows or the systems performance, quality and reliability. At the end this World Championship showed how videoReferee® can speed up decisions, provide failsafe decisions and reduce vetoes from athletes. Additionally, the recordings could be exported and therefore were used for training purposes. 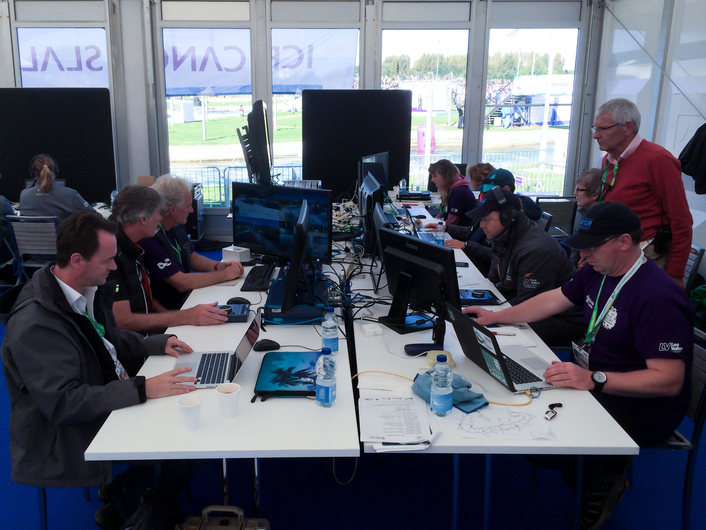 Eric Lokken, ICF Canoe Slalom Technical Committee Member, comments on the use of the new system: “In the past, we had to rely on a produced video signal and had to request a replay, which caused a delay of the final result for each athlete. We used videoReferee for the first time during the World Championships in London. The system was easy to learn and setting up the software plus learning how to use it took only an afternoon.” Further on he enthuses, “During the competition, you can easily choose by touchscreen which cameras you want to look at. In most cases, we could review a penalty during the run and deliver a solid result before the athlete crossed the finish line. Using this new tool during the Canoe Slalom World Championships made a huge impact to deliver the results in time and undoubted.” 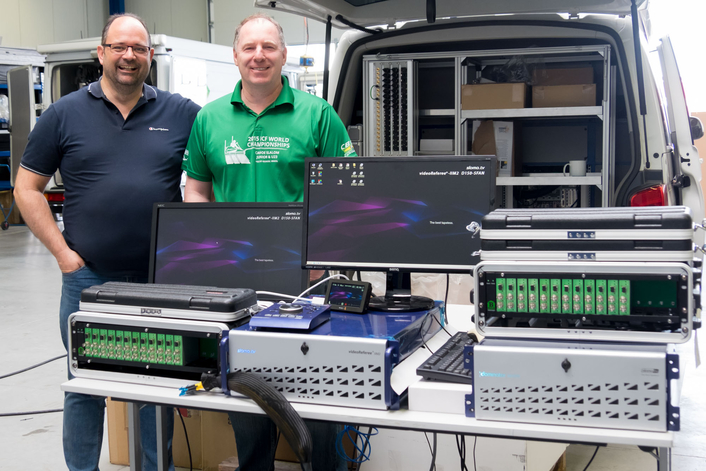 videoReferee® systems move on with the athletes to Rio

videoReferee® on its way to the next challenge
Broadcast Solutions supported the tournament with two systems. The main system was a videoReferee® MKIII with 12 channels recording simultaneously. A videoReferee® MKII with up to 11 channels was used as a backup system. In 2016 videoReferee® systems were in use during several Canoe Slalom Worldcup tournaments around Europe like the European Canoe Slalom Championships in Liptovski (Slovenia), the World Cup Series in Ivrea (Italy), La Seu d’Urgell (Spain) or Pau (France), using some of the most famous white-water courses in the world. During these competitions an exciting new discipline tested the system. In Canoe Slalom Cross three athletes start simultaneously by plunging into the water and have to pass only 4 rods and to do a role. For next years’ competitions in Canoe Slalom Cross extensive testing and use of the videoRefeee® system is scheduled. As a next step in video judging Canoe Slalom the videoReferee® systems move on with the athletes to Rio where it will be used as the main judging system for tournaments. 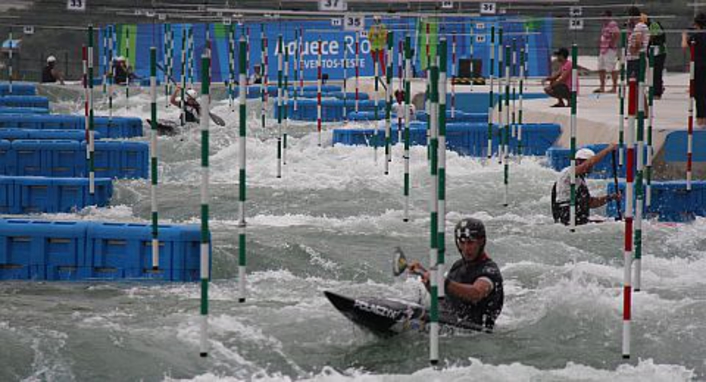