For the first time videoReferee® was used as the main judging system during a Canoe Slalom World Championship. The event took place at Lee Valley White Water Centre at the outskirts of London. On the race track that was used for the 2012 Olympics 300 athletes from 55 countries were fighting for medals and positions. The videoReferee® system enabled the judges to provide fast and reliable decisions. 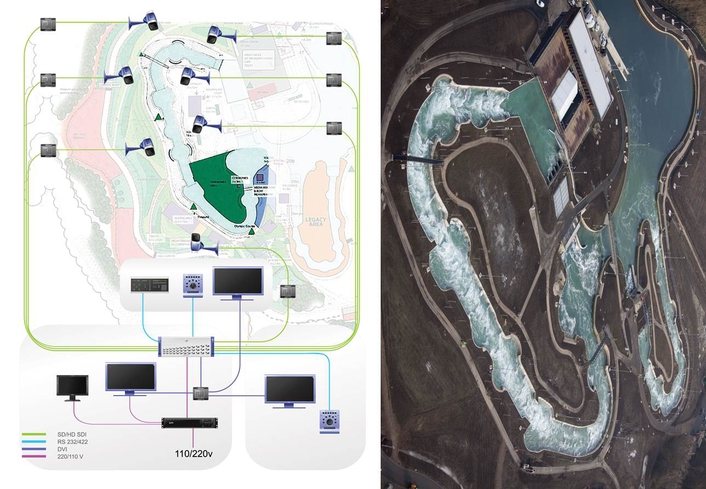 Along the Slalom Track the videoReferee Cameras were installed

Eric Lokken, ICF Canoe Slalom Technical Committee Member, comments on the use of the new system: “In the past, we had to rely on a produced video signal and had to request a replay, which caused a delay of the final result for each athlete. We used videoReferee for the first time during the World Championships in London. The system was easy to learn and setting up the software plus learning how to use it took only an afternoon.” Further on he enthuses, “During the competition, you can easily choose by touchscreen which cameras you want to look at. In most cases, we could review a penalty during the run and deliver a solid result before the athlete crossed the finish line. Using this new tool during the Canoe Slalom World Championships made a huge impact to deliver the results in time and undoubted.”

The videoReferee® system was used as the final judging system, drawing on the signals of all cameras along the racetrack. All gates along the track were monitored with cameras that deliver up to four angle shots. Since videoReferee® can easily be integrated in existing production environments, the system used in London also handled signals from the local TV host broadcaster to revert to the maximum amount of available signals.
Broadcast Solutions supported the tournament with two systems. The main system was a videoReferee® MKIII with 12 channels recording simultaneously. A videoReferee® MKII with up to 11 channels was used as a back-up system.

Canoe Slalom is one of the most dynamic and most spectacular boat sports. The aim is to complete in a very short time a white water course and to pass through gates downstream or upstream correctly. The gates should be passed completely without touching the rods. If this fails, the athlete will receive penalty seconds for touching the rods or missing the gate. Whether a rod is touched or a gate has been passed correctly, is often difficult to judge during the competition.

In order to assist the referees in questionable situations the International Canoe Federation ICF has implemented video judging systems in international competitions since the year 2007. However, the common technical tools in use often reached their limits because of to less perspectives and available camera signals. Beforehand the simultaneous view and replay of several signals and perspectives was difficult to achieve and obstruct fair decision-making. An unsatisfying situation for athletes and fans alike.

Again, the main goal during the London event using this new video judging system was to speed up the decision of the judges after each run and to provide a hundred percent failsafe decision that sustains vetoes from teams and athletes alike. This resulted in clear and safe decisions, less waiting time and most of all in stable medal announcements.

With the videoReferee® system used in London the referees had access to up to 12 camera signals in HD quality. During the competition, all signals could be viewed and marked simultaneously throughout continuous recording. videoReferee® offered the organizers and referees unprecedented opportunities to clarify controversial scenes, thus ensuring more fairness during the competition. 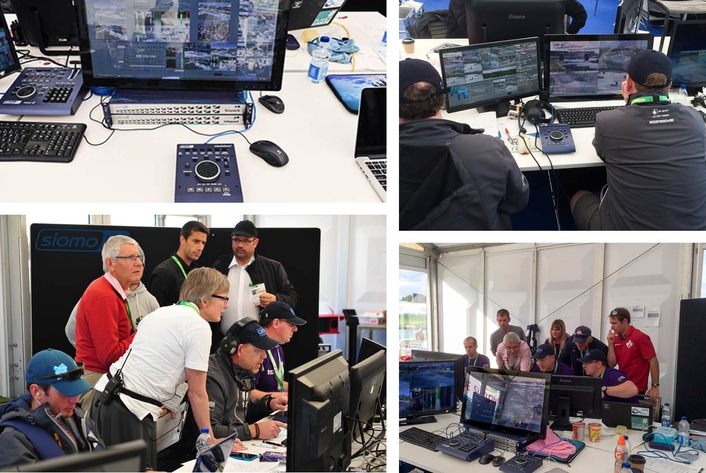 With videoReferee® the marking of contentious scenes can be done automatically using algorithms or manually by the referee at the workstation. Using the controller, individual channels can be selected or special situations can be searched and marked – all in real-time. The operator can flag selective scenes during live-recording or by accessing previously recorded material. The users can choose between the simultaneous view of all channels, single view or zoom view. With videoReferee® it is possible to export marked scenes to DVD or MP4 file for backup reasons as well as to record entire sport events. Additionally, the teams participating in London used the recorded material for their training purposes.

The Canoe Slalom European Championships in Germany this year were the first test for videoReferee® at an ICF event. At the London World Championships it became obvious, that videoReferee® is a sophisticated tool to help judges during the course of the event. Due to the fact, that the manufacturers of videoReferee® try to focus on the ease of use for the operator when designing the system, it is intuitive and easy to learn – judges can start to work with the system in a breath.

Broadcast Solutions is one of Europe’s biggest and fastest growing system integrators. For more than ten years the German based company stands for innovation and engineering „Made in Germany“. With subsidiaries in Europe, Asia and the Middle East Broadcast Solutions plans, implements and realises projects in the areas of Outside Broadcast, Satcom, fixed Broadcast Facilities, Sport Arena Multimedia Solutions as well as mobile Security and Surveillance Solutions. A further emphasis of the company is to consult our customers when it comes to workflow optimization, trainings and production consultancy. With more than 100 employees worldwide and working as a hardware independent system integrator Broadcast Solutions offers its customers tailor-made solutions – from idea to implementation and beyond.