Lee Valley White Water Centre will host the canoe slalom events of the 2012 Summer Olympics
Canoe slalom is a competitive sport where the aim is to navigate a decked canoe or kayak through a course of hanging gates on river rapids in the fastest time possible. Modeled on slalom skiing, the first Canoe Slalom competition was held in Switzerland in 1932. The sport was staged on flat water during its early days, but was later switched to white water rapids.

Canoe Slalom didn’t make its debut until the1972 Munich Games and only became a permanent part of the Olympic program in1992. Since becoming a permanent part of the Olympic program 20 years ago inBarcelona, the sport has thrilled spectators at the Games with spectacular, non-stop action on the powerful, unforgiving water. At London 2012, the CanoeSlalom competition will be held at Lee Valley White Water Centre, in a new, world-class facility located on the edge of the 1,000-acre River Lee Country Park.

The basics
Canoe Slalom competitions consist of timed runs down a white water course, which contains up to 25 gates. Touching a gate adds a two-second time penalty to the run; missing a gate incurs a 50-second penalty. The time taken to run the course in seconds is added to penalty seconds incurred to give the overall time. 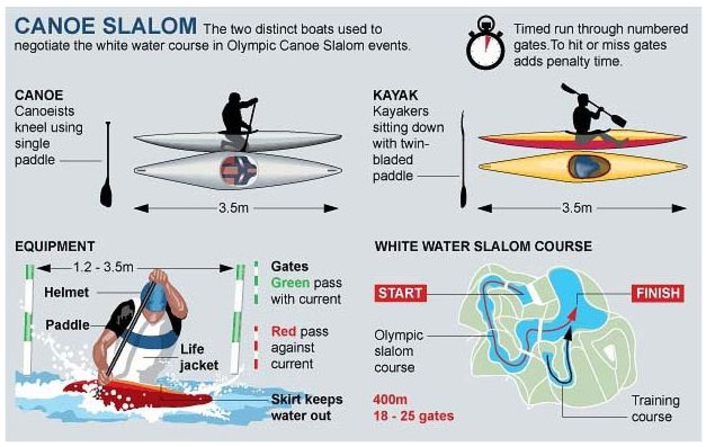 Within the Canoe Slalom discipline there are events for both canoes and kayaks.

In canoe single (for one person) and canoe double (for two people) events, competitors use single-bladed paddles; in kayaks, competitors use paddles with blades at both ends. Canoe Slalom boats are small, light and agile and their shape allows for good maneuverability through the rapids.

The 25 gates are painted red or green according to whether they have to be negotiated downstream (green) or upstream, against the current (red). There are a minimum of six upstream gates, which are harder to tackle. The last gate is always 25m from the finish.

Any home advantage that British athletes may have enjoyed has been dissipated by the decision of Lee Valley Regional Park Authority, owners of the white-water centre, to allow foreign athletes unrestricted access to the centre. At the Beijing Olympics overseas canoeists were only given minimal time to get used to the white-water course ahead of the Games.

At the Olympic Games each competitor does two runs in the qualification round, the better of the two times is used for the qualification result. Depending on the number of participants of the event, 10 to 40 boats make it through to the semi-final; this consists of one run on a different course. The fastest 10 boats per event make it through to the final. The Semi-Finals and Finals are both standalone single runs of the course.

The venue is located between the towns of Waltham Cross in Hertfordshire and Waltham Abbey in Essex. The site is just outside the northern boundary of Greater London and 9 miles (14 km) north of the Queen Elizabeth Olympic Park in Stratford, east London. The Centre is in the heart of River Lee Country Park which is part of the 10,000-acre (40 km²), 26-mile (42 km) long Lee Valley Park. The Centre opened in late 2010 offering canoeing and rafting activities to the public ahead of the London 2012 Summer Olympics. 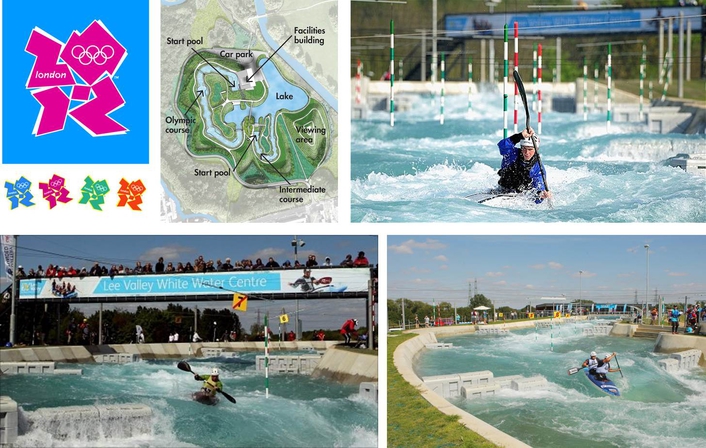 The venue has a purpose built slalom course for the Olympic white water canoe events. The main competition channel is an international and Olympic standard 300 metre canoe and kayak slalom course. It and the shorter warm-up course empty into the warm up and cool down lake. The white water is created by a system of pumps which lift water into the two start pools. All of the water contained in the system is slightly chlorinated in order to retain water quality. The 300 metre competition course has a drop of 5.5 metres (18 ft), for an average slope of 1.8% (18 m/km or 95 ft/mile) and a pump-powered streamflow of 13 cubic metres per second (460 cubic feet per second). The intermediate/warm-up course is 160 metres long with a drop of 1.6 metres and flow of 10.5 cubic metres per second. A 10,000 square metre lake, filled with groundwater, supplies the water for the pumps.

The course is sited within a new landscaped parkland setting, including path and bridge networks to enable spectators to have access and view the events. A new facility building houses reception, café, changing rooms, shop, offices, spectator viewing, equipment storage and water pump and filtration facilities. During the Games, temporary seating will be installed around the venue for 12,000 spectators. 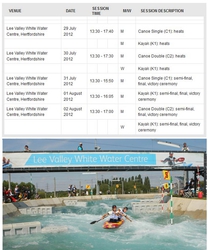