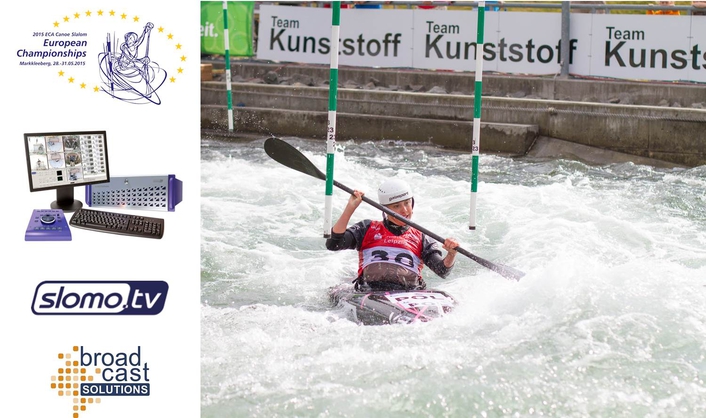 For the first time Canoe World Association ICF used a new test system for video judging
Between May 28 to 31 2015, the elite of European Slalom canoeists met in Germany for the Canoe Slalom European Championships. During the competition the International Canoe Federation ICF now supported the local organizers in implementing video judging systems, using a videoReferee® system. At Canoe Park Markkleeberg (Saxony), one of the most modern white water systems in the world, slomo.tv’s videoReferee® system was used as an additional tool for monitoring the gates.

Canoe Slalom is one of the most dynamic and most spectacular boat sports. The aim is to complete in a very short time a white water course and to pass through gates downstream or upstream correctly. The gates should be passed completely without touching the rods. If this fails, the athlete will receive penalty seconds for touching the rods or missing the gate. Whether a rod is touched or a gate has been passed correctly, is often difficult to judge during competition.

In order to assist the referees in questionable situations the International Canoe Federation ICF has implemented video judging systems in international competitions since the year 2007. However, the common technical tools in use often reached their limits because of to less perspectives and available camera signals. Beforehand the simultaneous view of several signals and perspectives was difficult to achieve and obstruct fair decision-making. An unsatisfying situation for athletes and fans alike.

Now the organizers of the 2015 Canoe Slalom European Championships went new ways. During the Canoe Slalom European Championships in Markkleeberg (Germany) ICF supports the local host with the implementation of video judging systems using a videoReferee® system. With videoReferee® the referees had access to up to 11 camera signals in HD quality. In the competition, all signals could be viewed and marked simultaneously during continuous recording. videoReferee® offered the organizers and referees unprecedented opportunities to clarify controversial scenes, thus ensuring more fairness during competition.

Jean Michel Prono, Chairman Canoe Slalom, International Canoe Federation (ICF) on using videoReferee® during the competition: “videoReferee® answers our needs for a fast review of a situation while the race is still running. It really solves the problems we have with dubious situations.”

videoReferee® is a multi-channel recording and playback system, already used thoroughly as a multi-channel referee system in the Kontinental Hockey League KHL, the highest Russian ice hockey league - with participation of European teams. videoReferee® is designed as a portable and cost-effective video judging system for sport events and is used by referees to assess contentious situations. The system allows for simultaneous recording, search and playback of up to 11 video channels in HD quality.

The marking of contentious scenes can be done automatically using algorithms or manually by the referee at the workstation. Using the controller individual channels can be selected or special situations can be searched and marked – all in real-time. The operator can flag selective scenes during live-recording or by accessing previously recorded material. The users can choose between the simultaneous view of all channels, single view or zoom view. With videoReferee® it is possible to export marked scenes to DVD or MP4 file for backup reasons as well as to record entire sport events. 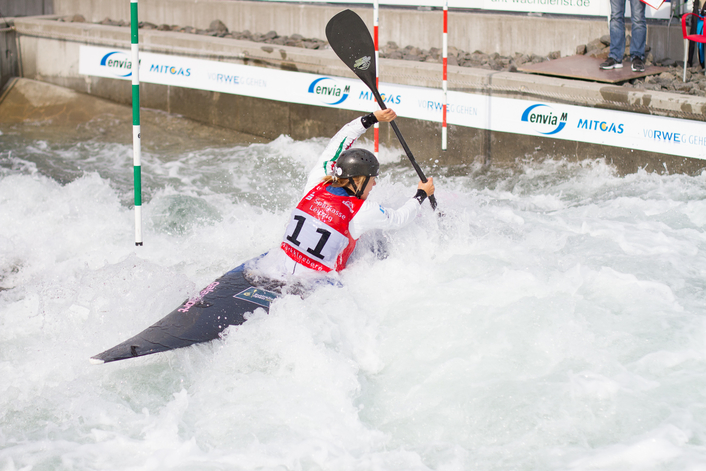 The videoReferee® system used during the Canoe Slalom European Championships proved its flexibility in practical use. It was integrated easily into the existing infrastructure of the event and had access to two signal sources. On the one hand the system used the signals of the cameras already on-site. Additionally videoReferee® used video signals provided by the local host broadcaster. Using videoReferee® and realising the optimal and best possible coverage of the 270m long race course with up to 25 gates offered the event organizers new opportunities and quality in assessing contentious scenes, never attained before.

The recording of all material with videoReferee® provides additional benefit. New ways to use the recorded video material for marketing purposes arise for event organizers as well as sports organisations. The use of videoReferee® at the Canoe Slalom European Championships in Germany was also a test for the Canoe Slalom World Championships to be held in London in September 2015.