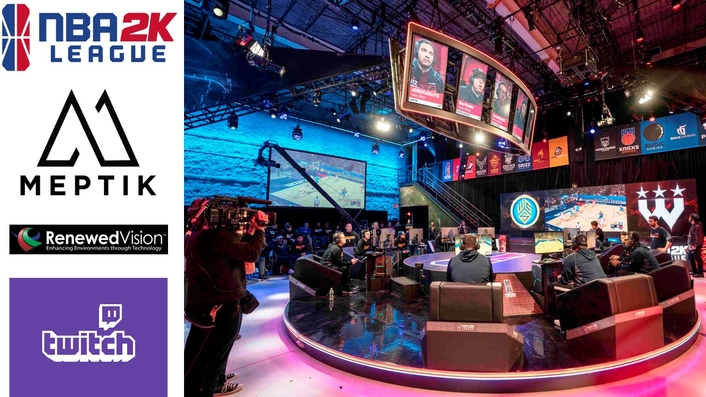 Atlanta-based experiential design studio MEPTIK emphasizes the power, flexibility and ease of use as central to the fan experience throughout NBA 2K’s inaugural season

Building on the global popularity of the NBA, the new NBA 2K League brings together two teams of professional “e-sports” athletes that use specialized gaming controllers to move NBA-Star Avatars—passing the ball and making the shots—on a virtual court. For live and on-demand audiences watching on the Twitch.tv online network, Renewed Vision’s PVP3 media server and screen control system has amplified the visual excitement and fan engagement by powering NBA 2K’s dynamic, multiscreen experience.

In a typical NBA 2K match, the two teams sit center stage at a large round console, with five players on either side. Each player controls game play while watching the virtual game on their individual monitors. Live camera head shots of each player are shown on large LCD displays above each player to inform studio and online audiences.

Throughout the game, PVP3 effortlessly powers multi-channel delivery of high-resolution video presented across the LCD cluster and several massive LED video walls. The unique experience, created by MEPTIK, an Atlanta-based experiential design studio, is produced on a 7,433-square foot soundstage at Brooklyn Studios. The NBA 2K League’s inaugural season began in May, with games scheduled every weekend through September.

Renewed Vision’s PVP3 is invaluable to the high-quality, multichannel content delivery and presentation for each game. Its video engine allows multiple channels of video and graphics to reliably display as separate, jitter-free images on individual or groups of monitors, as well as a single, continuous image that fills the video walls and display clusters. 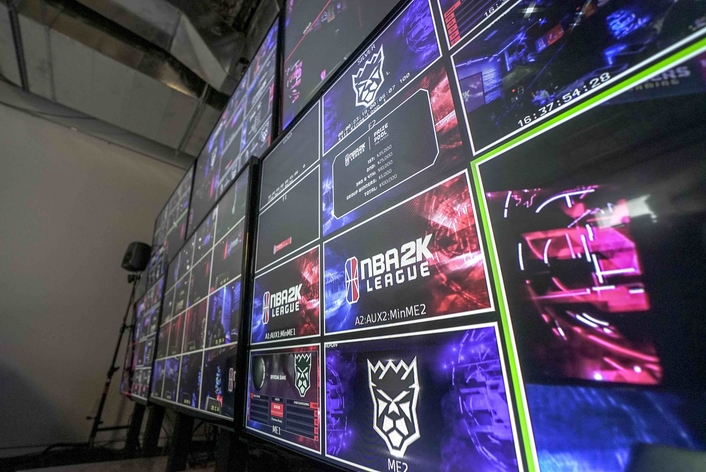 “We chose PVP3 because it has the power to output a high volume of high-resolution content, with the flexibility to creatively compose the layout of the displays, all virtually on the fly,” said Nick Rivero, MEPTIK’s Co-founder. “Considering its power, PVP3 is unusually user-friendly, to the point where we could set up a full turnkey system to playout an elaborate multi-screen experience, and then turn over the daily operations to users. In this workflow, users can simply ‘take the ball and run with it,’ without any further technical support from us. Compared to the other high-end broadcast servers we considered, PVP3 was a fraction the cost, and its price point fit really well within our production budget.”

According to Rivero, PVP3 offered a significant operational advantage through native integration with the studio’s HD-SDI infrastructure and workflow. This ensured seamless interoperability with a Ross production switcher, high-end Sony cameras, live graphics systems and a house router.

With 20 HD-SDI connections available, PVP3 ingests four live video feeds originating from both the gaming system and camera shots. The system is then used to mix and map live content with pre-rendered content, and output 12 channels of video to the various on-set displays including a 20-foot LED video wall on each side of the stage. 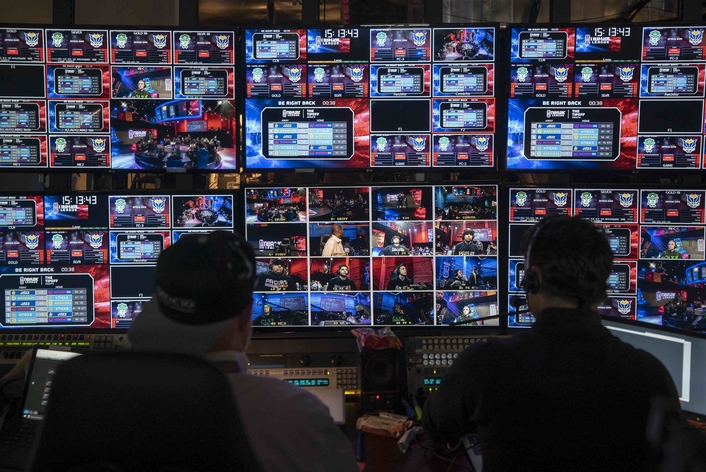 To power the operation, PVP3 is installed on an Apple iMac Pro, connected to two Sonnet SE Thunderbolt 3 chasses, and outfitted with five Blackmagic Duo 2 cards. An Elgato Streamdeck triggers cues within PVP3 of various scenic changes, each with a clearly labeled button. Some of  MEPTIK’s experience-driven designs include pre-rendered overlays and graphical elements, such as sponsor logos, ads and player statistics, composited with the live video feeds dynamically in the PVP3 system.

“Since we needed to train a three-person crew to take charge of the entire PVP3 operation, it was essential for this system to be extremely intuitive to learn and user-friendly to use,” Rivero said.  “Over the years, our firm has used PVP for a variety of installations, each time implementing it in new and innovative ways. This really speaks to its power, flexibility, and versatility – something that Renewed Vision is able to deliver at a much lower price point than its competition, without any adverse effect to quality and performance.”