Bringing gameplay to the big screen at Insomnia 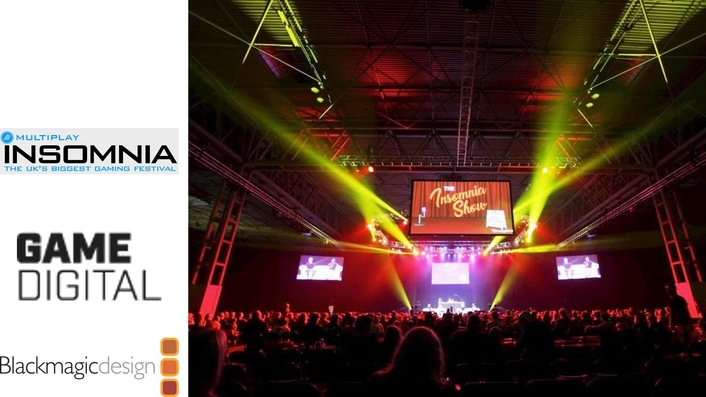 As the live events arm of the GAME UK group, Multiplay Events is at the very heart of the UK’s gaming community. The team is responsible for the Insomnia series, the UK’s biggest gaming festival, where more than 60,000 gamers come together to check out the latest tech and games, meet their favourite content creators and of course, watch the very best players battle for major prize pots.

Studio manager, Jake Hukin, takes us through how he tackles bringing the on-screen experience to life for a live audience, the importance of flexibility in the festival’s video systems and also how the event’s live production requirements are helping to train and inspire gamers to get to grips with AV. 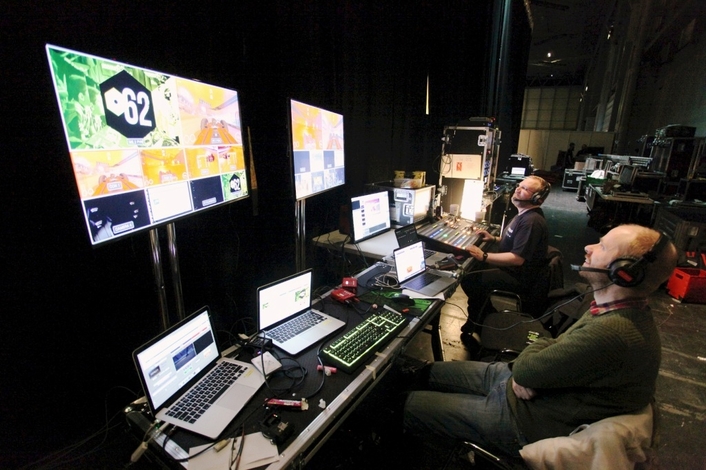 A flexible infrastructure
“No matter what size of event we’re planning for, flexibility is our starting point,” Jake begins. “There is a lot of simultaneous action that goes on across the stages, which our live presenters have to be aware off at all times. We have to react immediately to what’s grabbed their attention and show a stream of the particular game, or even a particular player’s point of view, that they want to show the audience. Doing that across three stages across the four days, with a multitude of games, each requiring a different style of production, is exciting, but also a massive challenge.” 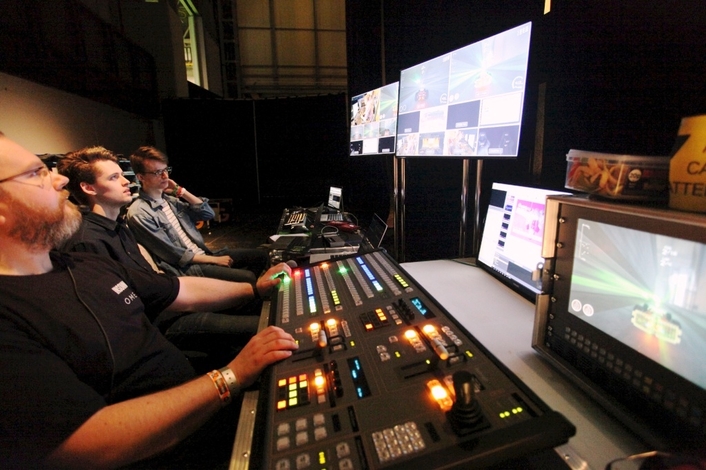 Multiplay Events has two ready-to-deploy mobile systems, ‘Red’ and ‘Blue’, both of which centre around a Smart Videohub 40x40 from Blackmagic Design to deliver the immediacy required by the team to access any input or output at a moment’s notice. “All our systems start with the Videohub, and we map out each of our stages and their video requirements. From there, we can build out our various production hubs and streaming systems and feed these in and out via SDI to the router.” 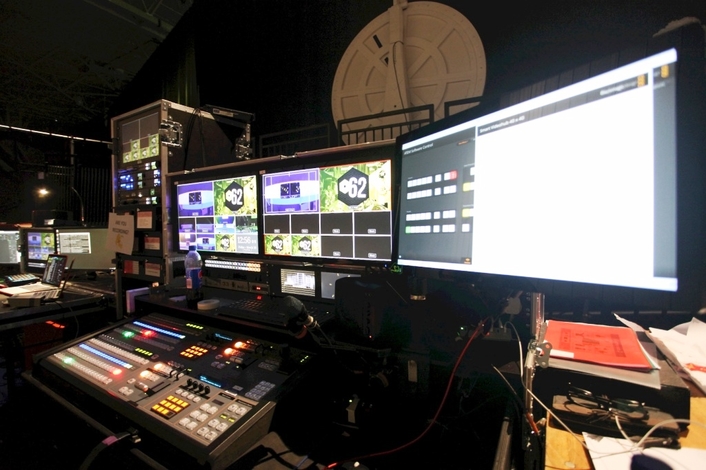 Multiple computer inputs, naturally, form a huge element of the event’s video system, and Jake relies on a combination of Teranex standards converters and MiniConverters to bring the action to the big screen. “Each of the stages has a range of consoles for individual and team battles in anything from Minecraft through to international tournaments, all of which we cover on big screens throughout the auditorium,” Jake explains.
“And just to add to the complexity, there are a series of ‘bring your own computer’ LAN tournaments that we often want to cover too. We use 1080p 59.94 as our standard production format, so we can have up to seven Teranex units in our rack, converting the action. Given the speed of the action, low latency here is crucial; you don’t want the audience to miss a killer move, see a team react in person before you see why, or be behind the presenters’ commentary.” 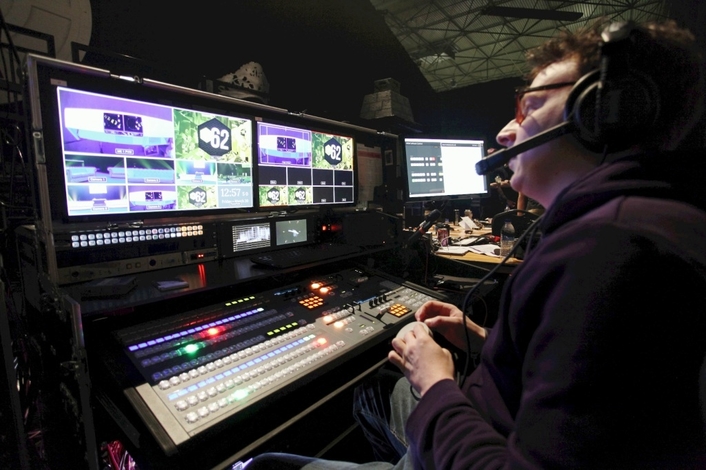 Multi-stage, multi-layer production
Each of Insomnia’s main stages has a packed schedule, with an ATEM 2 M/E Production Studio 4K switcher delivering live content for the audience following the action.

When it comes to producing a comprehensive program mix that translates the gamers’ progress through the battle, Jake makes use of the ATEM’s DVE, in-picture effects and macros. “There are so many things you want to show on screen that you have to be able to use features like SuperSource or picture in picture, as so much is going on at any one time. So, we might want to show the player’s reaction to the gameplay live, or have two contestants battling simultaneously as a split screen.” 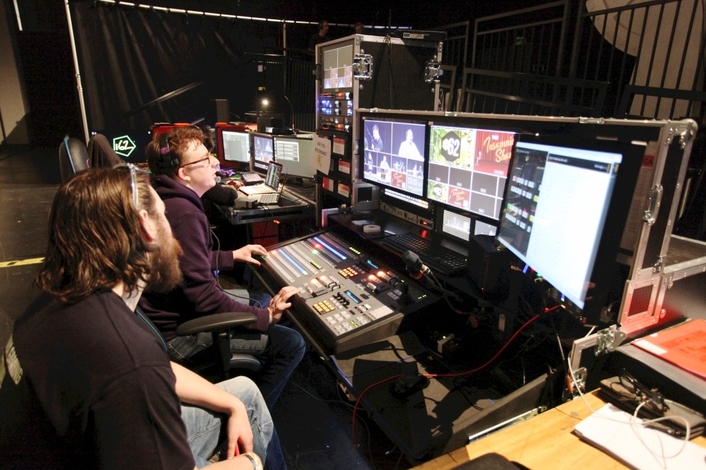 “Our Alpha stage can host feature events, where we can be handling multiple feeds of various complexity from the action on that stage alone, but we have to be able to bring in gameplay feeds and replays from all of the other three stages for the commentators and analysts to refer to in the studio.”

A pair of ATEM 2 M/E Production Studio 4K switchers sits at the centre of the system and produce a clean feed and Alpha Stage’s main program mix, which takes in feeds from all of the stages, presenters and demo areas. 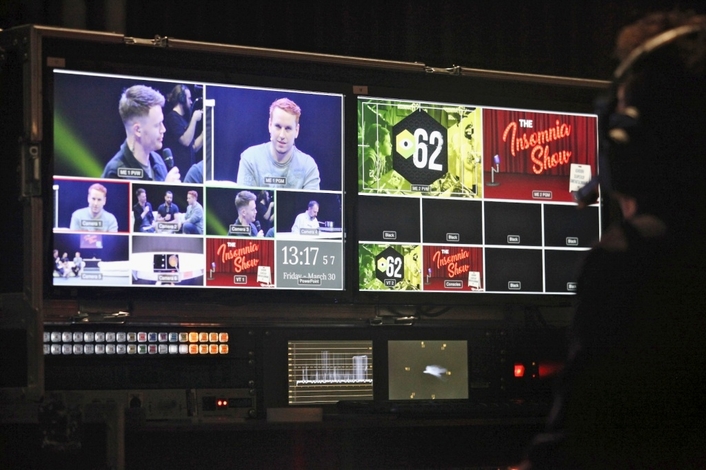 “From an editorial perspective, it’s a very tough challenge to make sure the video content not only shows the audience what’s happening around the tournament, but also conveys the emotions and excitement that the teams on stage are experiencing. The ATEM switchers make a potentially complex and tricky multilayer production very simple to handle.”

A strong community spirit
Keeping the wider gaming community up to date with the various battles going on around the Festival also falls to Multiplay Events, with as many as 16 live streams produced concurrently for twitch.tv and Insomnia’s live channels. 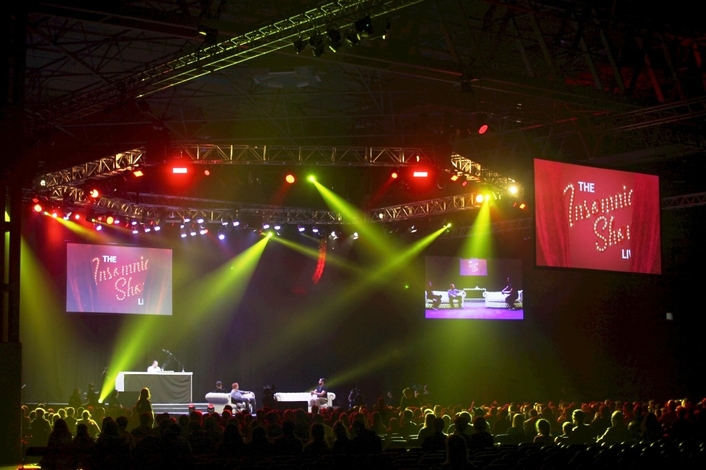 “Our larger streams can require a variety of audio, for example some will have our live presenters’ commentary, however others require an international re-dub, so we use a trio of HyperDeck Studio recorders on these, which allow us to manage our audio outputs across the various channels and ensures that all of our gaming fans get the information they need to best follow the action.”

Unsurprisingly, the production team required for staging the Insomnia series is substantial, and Multiplay Events can call upon the gaming community for additional hands. “Gamers are a fantastic group of people, and every year there are a ton of volunteers who help us with staging the event - it’s actually how I started,” explains Jake. “What we like about the Blackmagic kit is that it’s very easy to get to grips with. We’ll give each of the volunteers a specific role, train them on the equipment, and then leave them to it for the weekend.”