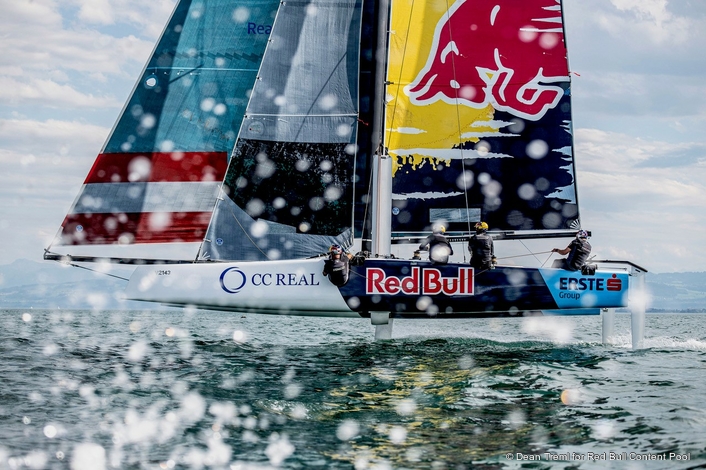 When wind speeds are right, the GC32 – a catamaran equipped with V-foils and T-rudders – lifts the hulls up to 1.5 meters out of the water and literally flies. “Lake Constance offers the perfect conditions for a foil test. Hardly any waves, providing flat water and long distances. It’s an excellent location for us to test the new foils together with the technicians,” explains helmsman Roman Hagara, who is already completely focused on the 2021 season.

In perfect conditions, Red Bull Sailing took the boat to speeds of up to 32 knots. “Actually, we're not interested in speed here. Of course we can sail faster by the sea if the wind conditions are ideal. However, Lake Constance is perfect for the foil test. When evaluating the data, we pay particular attention to the efficiency of the foils. Especially when it comes to stability, because there’s up to 6 tons of load coming into play in some maneuvers. And a centrifugal force load of up to 4 for the crew,” explains tactician Hans Peter Steinacher.

As part of the data analysis, it became clear that Hagara, Steinacher and their crew managed to sail in three countries in three minutes. Steinacher smiles: “We were surprised ourselves to find that we were able to sail between Germany, Switzerland and Austria with three maneuvers. The GC32 catamaran has no brakes, and you can't always keep to the speed limits.” 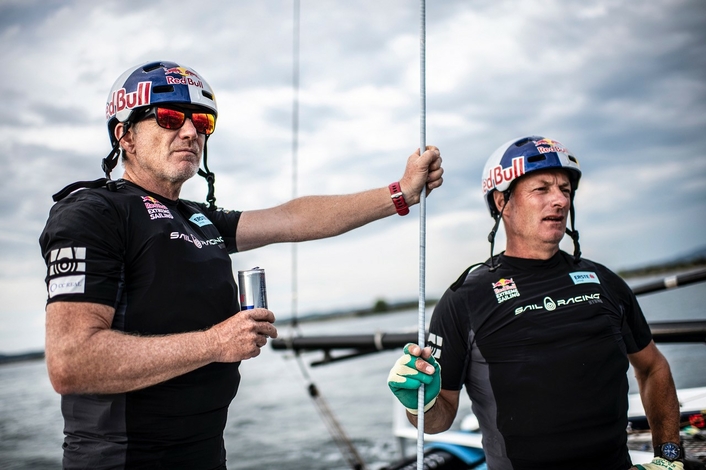 The GC32 catamaran will be transported from Lake Constance to the team shipyard in Thalgau (Salzburg / AUT) for storage there until the start of the season next year. The GC32 Racing Tour 2021, with teams from up to 10 nations, starts in the spring on Lake Garda (ITA).

“This year, 2020, is our 24th season together in competitive sport, and we actually said it should be the last,” Hagara notes. “But we definitely want to end our career with an overall victory on the GC32 Racing Tour.”

“Because the tour, like many other sporting events, cannot take place this season, we have simply extended our timeline by a year,” adds Steinacher, looking forward to the challenges ahead. 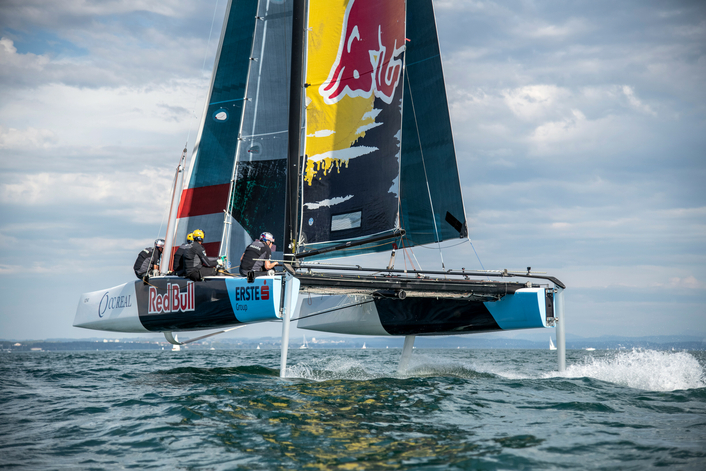 Roman Hagara and Hans Peter Steinacher are Austria's most successful summer athletes. They have won two Olympic gold medals (Sydney, Athens) and numerous world championship titles, and they are the only Austrians to have participated in the America’s Cup World Series. As heads of the Red Bull Sailing Team in the GC32 Racing Tour and as sporting directors of Red Bull Foiling Generation, they lead the next generation of sailors with the aim of taking sailing to an even higher level.

About the GC32 Racing Tour

GC32 Racing Tour course configurations are similar to those used in the America’s Cup, and venues are chosen with the aim of providing the best chance of optimum conditions to get the catamarans flying on their foils.