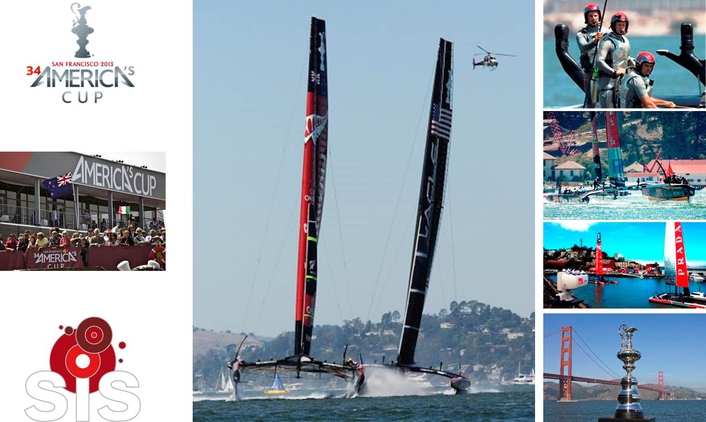 SIS LIVE Onboard Camera systems at the America's Cup
SIS LIVE has supported America’s Cup Television (ACTV) in the broadcast of the America’s Cup World Series, a prestigious series of yachting events spanning the last three years. SIS LIVE has been involved since the race and broadcast equipment tests were conducted back in 2010 and is now involved in the final stages of the competition, which take place throughout the summer in San Francisco Bay. Earlier this year ACTV and NBC were nominated for an Emmy Award in the category of Outstanding Technical Team Remote for the broadcast of the San Francisco regatta, which took place in October 2012.

Paul McNeil, Head of the onsite SIS LIVE Special Cameras team said “I am immensely proud of the whole team on site and all the engineering effort that happened at base to get us to this ground breaking coverage. When you see the strength in depth that SIS LIVE has across all areas, the future is very bright.”

The America’s Cup is the oldest active trophy in international sport, attracting attention and prestige from around the world since 1851. The 2013 competition approaches its exciting conclusion this September with the three challenging teams – Artemis Racing, Emirates Team New Zealand and Luna Rossa Challenge – having competed throughout September for the Louis Vuitton Cup and, with it, the right to take on the current holders, ORACLE Team USA. The America’s Cup Final is underway during IBC with the challenger and ORACLE Team USA competing over up to 17 races with the first to reach 9 wins becoming the new America’s Cup champion.

Crucially to the SIS LIVE technical teams the Louis Vuitton Cup and America’s Cup races use a new design of yacht. These new, larger 72-foot wing-sail catamarans carry 11 crew and present a larger deck area to be covered. This means that SIS LIVE’s onboard camera and transmission systems have had to be adapted to suit. Throughout the competition the SIS LIVE special cameras team has been working closely with the yacht designers and racing teams to ensure that the onboard broadcast technology is as lightweight as possible and unobtrusively rigged to prevent any disruption to the onboard activities. Between the Louis Vuitton Cup and America’s Cup Finals came the Red Bull Youth America’s Cup using ten of the smaller AC45 catamarans which also required on board camera systems.

Onboard coverage from each AC72 comes from 6 agile and 1 fixed camera systems controlled by 2 operators, with 4 live feeds available to the director at any one time and switching used to select the four active sources. The director also has the option of seeing 2 quad split screens on his production stack. 16 channels of sound are captured from each yacht, including from SIS LIVE’s in-house designed 5.0 surround sound microphone, deck FX mics, 5 radio mics on each of the crew members and 2 hull mics rigged inside the hull to capture the creaks and groans of the boats. A lens wiper and newly introduced automated camera washing system periodically sprays the cameras with fresh water to ensure that the HD images captured remain crystal clear. SIS LIVE also handles the transmission and reception of all remote camera sources using their innovative RF over IP system and spectrum management expertise. 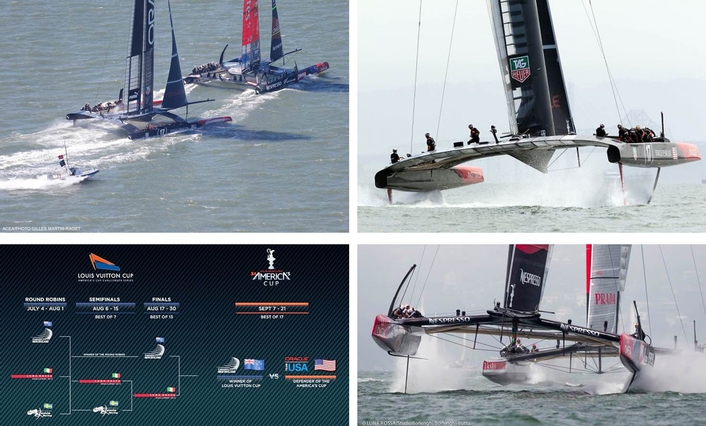 David Meynell, Managing Director, SIS LIVE, commented “We are very proud to be part of the 34th America’s Cup broadcasts. The hard work and ingenuity of our talented staff has enabled some of the most daring and exciting coverage ever seen of the sport. It has been a pleasure to work with ACTV to develop the innovative technology and techniques used to capture these races, and we are looking forward to delivering compelling coverage of the final stages of the competition, which promise to be extremely exciting.”

Denis Harvey, Production Executive, ACEA says “Three years ago we set out to revolutionize the TV coverage of 34th America’s Cup and, in doing so, introduce it to a new world of fans. Sailing is not only a challenging discipline, but also a challenging sport to broadcast as it takes place on a moving playing field, is in a harsh marine environment and all the camera and audio sources have to be delivered via RF. Over the last three years the SIS LIVE special cameras and RF teams have pioneered and evolved technologies and techniques used to create and deliver on-board coverage which draws the viewer into the heart of the action. Their imagination and technical ingenuity have helped us realize our ambitions and have set the benchmark for on-board coverage of future sailing events.”