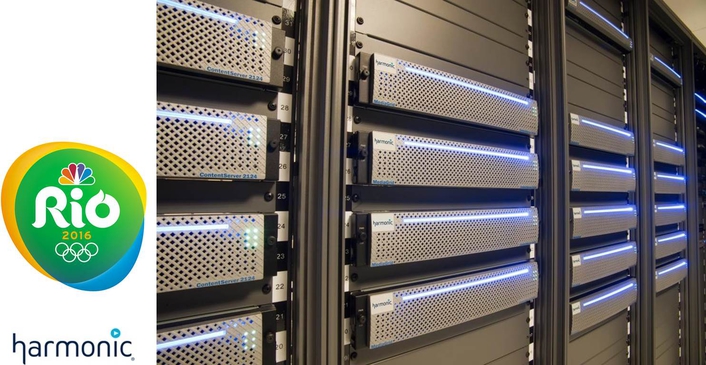 NBC Olympics, a division of the NBC Sports Group, has selected Harmonic MediaGrid shared storage system and Spectrum™ MediaDeck integrated media servers for its production of the Games of the XXXI Olympiad, which will take place in Rio de Janeiro, Brazil, from Aug. 5 – Aug. 21. The announcement was made today by David Mazza, CTO & SVP of NBC Olympics and Bart Spriester, SVP, Video Products at Harmonic.

NBC Olympics will use the multiple Harmonic solutions in its most critical production areas: in 10 global locations covering the event for broadcast, on demand, digital, news operations, and long term archive. This wide-area production model facilitates cost-effective content creation by helping NBC Olympics maintain a portion of its operation in the United States.

"Harmonic infrastructure has been at the heart of the NBC Olympics production workflow since the 2008 Beijing Olympics, supporting the evolution of coverage into a spectacular multiplatform offering of exciting, timely content," said Spriester. "We're proud to be a trusted partner of NBC Olympics once again, and we look forward to a hugely successful 2016 Rio Olympics."

"We are counting on Harmonic's integrated systems as part of our high and low resolution workflows. From ingest through media storage across 10 locations, MediaGrid and Spectrum systems are the backbone of our content acquisition and production workflows," said Darryl Jefferson, VP, Post Production Operations, NBC Sports Group.

Harmonic MediaDeck media servers will simultaneously record as many as 60 incoming venue feeds as both XDCAM-HD at 50 Mbps and H.264 low-resolution proxy. These systems also will give NBC Olympics personnel at the Stamford facility independent control over 60 additional channels of local ingest. Each recording's proxy will be replicated in near real time on a 960-TB Harmonic MediaGrid storage system connected via two 10-Gigabit circuits to a second 920-TB MediaGrid installed at the Stamford facility. In less than a minute, content created on the Rio MediaGrid system will be replicated on the Stamford MediaGrid system.

The NBC Olympics production staff in the U.S. and Brazil will have direct access to content stored on either MediaGrid system through the media asset management (MAM) system, even if the event is still in progress and the files are still being received. Once recordings begin, dozens of loggers, producers, and editors in Stamford will access the material, extract what they need, and make highlight files. Using extensive live logs and stats, scoring and timing information embedded as metadata, editors will be able to make shot lists that can be quickly and automatically conformed in proxy resolution for streaming along with live multiscreen services, or conformed in high resolution for use in NBC Olympics' traditional broadcast edit suites in Stamford and other U.S. facilities.

Integration of the MediaGrid system into NBC's EVS server workflows, with EVS IPDirector devices directly mounted on the MediaGrid, will extend and pool the storage capabilities of the EVS systems. From any IPDirector seat, NBC Olympics personnel will have immediate access to footage from any venue, from any day of competition. An LTO-6 library in Stamford will also make it easy for production staff to access and use content from previous Olympic Games.