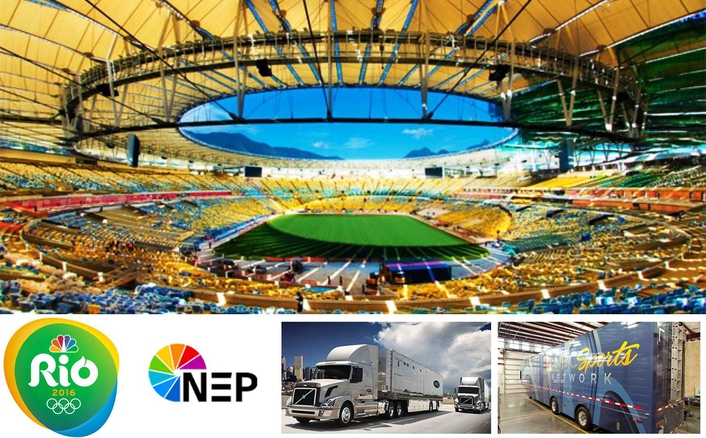 NBC Olympics, a division of the NBC Sports Group, has selected NEP Group to provide mobile broadcasting and engineering consulting for its production of the Games of the XXXI Olympiad, which will take place in Rio de Janeiro, Brazil, from August 5 - August 21. The announcement was made today by Christopher Adams, Vice President Venue Engineering, NBC Olympics and Deb Honkus, NEP Founder and Chairwoman.

NEP will provide outside broadcast units SS25 A, B, C, Iridium, Zinc, NCPXI, ST41 and ND5 and associated support vans for coverage of the opening ceremony at Maracana Stadium, track and field at Olympic Stadium, gymnastics at Rio Olympic Arena, swimming at Olympic Aquatics Stadium, beach volleyball at Beach Volleyball Arena on Copacabana Beach, and the closing ceremony at Maracana Stadium.

“NEP has been an integral part of NBC Olympics’ coverage of the past 11 Games. They not only have excellent mobile facilities but also, a great team of Remote Television professionals, well versed in the technical and operational aspects of a production. NEP is a key member of our NBC Olympics team,” said Adams.

“NEP is proud to support NBC on its coverage of the Rio Olympics and continue our relationship that has spanned every Winter and Summer Games broadcast over the past 28 years” said Deb Honkus, NEP Founder and Chairwoman. “NEP brings the latest broadcast technology to NBC Olympics’ coverage of the Games, along with a technical engineering team who have the deep international event experience to help make the operation a success. This combination, in addition to our worldwide network of technical solutions, brings a unique set of resources to the NBC Olympics production.”

NEP will have approximately 25 technical engineering and support personnel in Rio to support NBC Olympics at the mobile broadcasting facilities, and more than 15 at the international broadcast center to provide operations management and technical consulting.