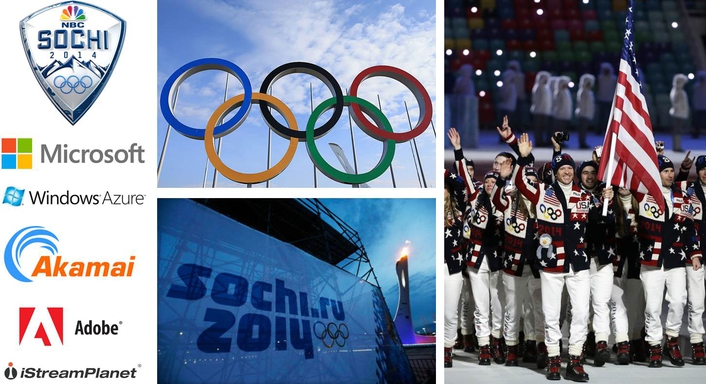 .
Microsoft Corp. has been selected to be the cloud encoding and hosting platform provider for NBC Olympics, a division of the NBC Sports Group, during its production of the 2014 Olympic Winter Games in Sochi, Russia, Feb. 6–23. As a result, viewers will be able to watch Winter Olympics programming via more than 50 live high-definition streams and on demand. The announcement was made today by Richard Cordella, senior vice president and general manager, Digital Media, NBC Sports Group, and Scott Guthrie, acting lead of Microsoft’s Cloud and Enterprise Group.

Through the power of cloud computing, NBC will use Windows Azure Media Services, a highly scalable video service platform hosted in Microsoft’s datacenters, to publish and stream coverage of the 2014 Sochi Winter Games. Whether on an Internet-connected TV, tablet or smartphone, viewers will be able to access live and on-demand content via the NBC Sports Live Extra app available free on Windows 8 and Windows RT devices, Windows Phone, Android, and iOS. In addition, viewers can go to NBCOlympics.com to view live or on-demand Olympics events on a PC or Mac — all being streamed with support from Windows Azure Media Services.

Microsoft customers watching the Winter Olympics will benefit from a connected viewing experience across any Windows Phone 8 or Windows 8, Windows RT, Windows 8.1 or Windows RT 8.1 device.

“During the 2012 London Olympics Games, viewers with connected devices watched, on average, six hours of NBC Olympics’ coverage a day, and we anticipate this demand will continue to grow for the upcoming Sochi Olympic Games,” Guthrie said. “To meet that demand, Windows Azure is leading the way by providing end-to-end live streaming of the Winter Olympics entirely in the cloud, including encoding, transcoding and streaming, for the first time in history. Our partnership with NBC Olympics delivers an immersive viewing experience, bringing the 2014 Olympic Winter Games to viewers’ fingertips, thanks to our powerful cloud technology and One Microsoft approach.” 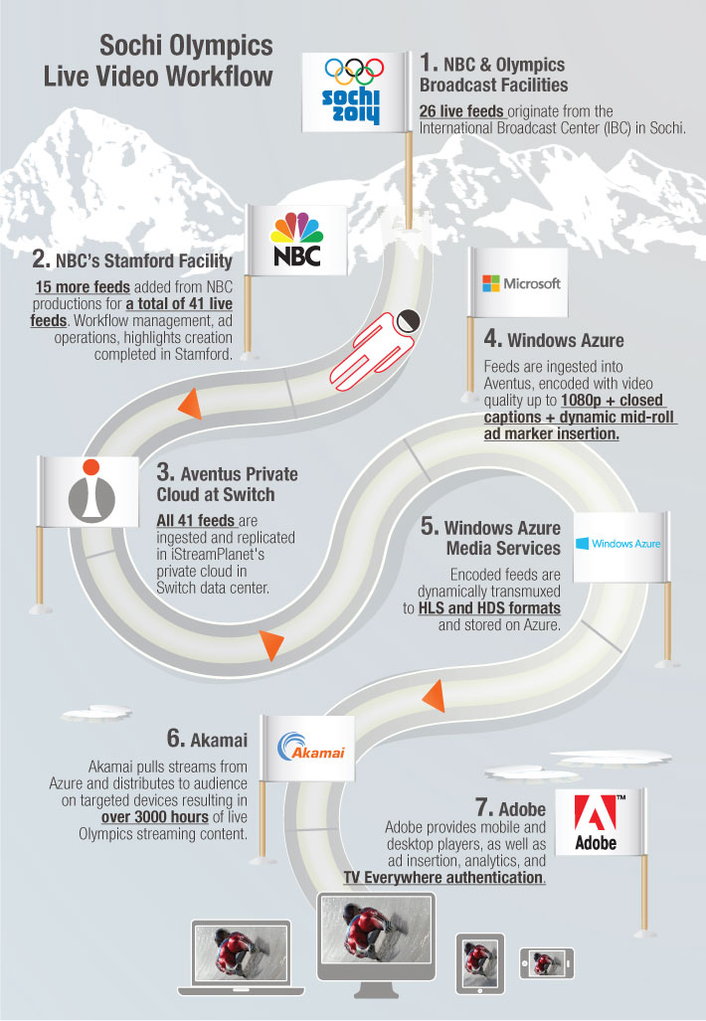 This year NBC expanded their targeted devices to include iOS, Android and Windows smartphones, PCs, Macs, and tablets

“We are pleased to be working once again with Microsoft, and we are confident that Windows Azure Media Services will help us provide the most robust streaming experience ever for a Winter Olympics,” Cordella said.

Microsoft has a broad partner ecosystem that extends to the cloud. To deliver NBC Olympics on-demand and live streaming coverage of the 2014 Olympic Winter Games, Microsoft is working with Adobe Systems Inc. and its Primetime TV publishing and monetization platform, including Adobe Primetime Player SDKs for Android, iOS, Windows, Mac OS and other platforms, to ensure full scalability and monetization of video streams across millions of U.S. households. In addition, Microsoft is working with iStreamPlanet and its cloud-based, live video workflow solution Aventus to power live video ingest and multiple bit rate encoding, including ad insertion, for NBC’s streaming coverage of the Olympic Games.

Video: How did iStreamPlanet Live Stream the Olympics?

About NBC Olympics
A division of the NBC Sports Group, NBC Olympics is responsible for producing, programming and promoting NBCUniversal’s Olympic coverage. It is renowned for its unsurpassed Olympic heritage, award-winning production, and ability to aggregate the largest audiences in U.S. television history.