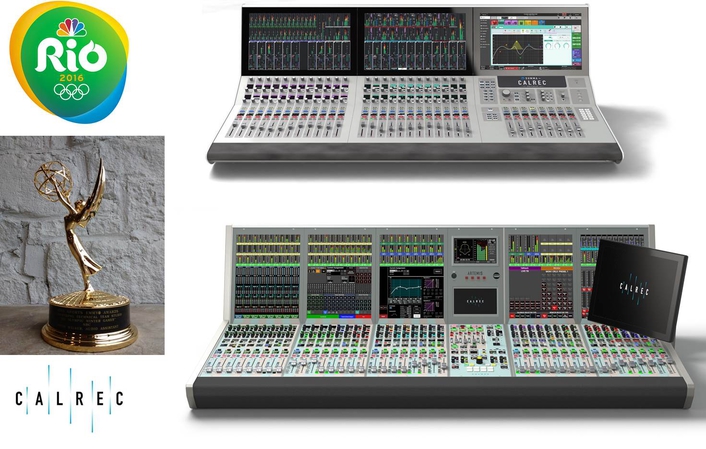 NBC Olympics, a division of the NBC Sports Group, has selected Calrec to provide seven audio mixing consoles for its production of the Games of the XXXI Olympiad, which take place in Rio de Janeiro, Brazil Aug. 5-21. The announcement was made today by Karl Malone, Director, Sound Design, NBC Sports & Olympics and Dave Letson, Vice President of Sales, Calrec.

Calrec Audio has supplied four Artemis and three Summa audio mixing consoles to provide full audio mixes for the coverage. Three of the 40-fader Artemis consoles will be stationed at NBC fly-pack venues to provide coverage of basketball, cycling, triathlon, marathon, volleyball, and diving. The fourth will be based in Audio Control Room X in the Compound within the International Broadcast Center in Rio. This console will be in use with venues moving audio and video over IP. One 24+8 fader Summa console will provide the main output in Audio Control Room X, while the remaining two will act as back up consoles in Audio Control Rooms A and B.

"This year is the first time we are connecting with Dante on the Hydra2 network, and we are delighted to continue this strong innovative relationship as NBC Olympics continues to push the boundaries of sports audio," said Letson.
"NBC Olympics is delighted to be working once again with Calrec, their consoles, and their support personnel for our coverage. We look forward to using the latest advancements in Calrec processor technologies, as well as newly updated interfaces, which have been developed based on our feedback and the feedback of many Calrec users worldwide," said Malone.

In addition to the seven consoles, Calrec will supply 26 x I/O boxes, creating a comprehensive and fully redundant Hydra2 network, which will provide signal management and full control across MADI and Dante.