Magical SGM G-Spot effects for The O2 Arena in London 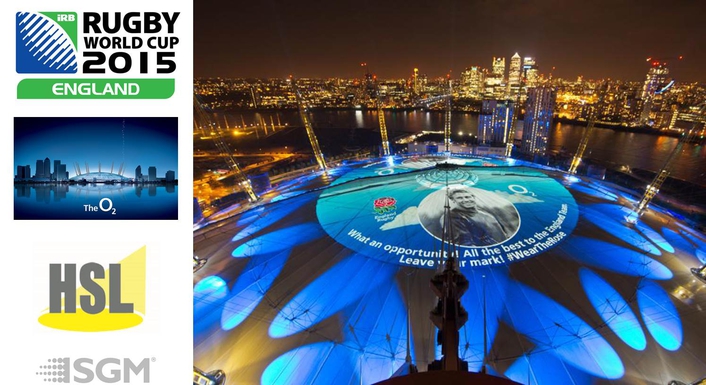 The multi-purpose entertainment arena in London, the characteristic O2 Arena, previously used for the 2012 Summer Olympics, is now the venue of the Rugby World Cup for a duration of seven weeks. For this event, The O2 has transformed into a canvas for the world’s largest projection in terms of light output.

No less than 96 G-Spot IP65 rated LED moving heads from SGM now adorn the dome canvas joining forces with 68 video projectors covering the 1 kilometre circumference of the roof. The G-Spots provide a petal shaped wash while the projectors combine to create a 360 degree video image. The interactivity of the project enables fans to have their tweets projected onto the venue by using the hashtag #WearTheRose.

This high-profile project is designed by Projection Artworks and the lighting element is designed and programmed by award-winning lighting designer Tim Routledge.

Professional lighting provider, HSL Group, supplied the many SGM G-Spots. Together with M.D. Simon Stuart, the team worked tirelessly to facilitate the delivery of equipment and infrastructure at very short notice.

An amazing accomplishment
The distinctive construction of The O2 facilitates this type of projects, as the arena’s roof was in 2003 constructed on the ground within the dome and was hoisted up thereafter. Thus, the masts are part of the outside dome structure.

Still, no project of this dimension comes without challenges. Several tests were made with traditional moving lights in weather-proof soft domes, but they failed and proved unworkable. Then the G-Spot moving head was brought in, becoming the obvious choice. 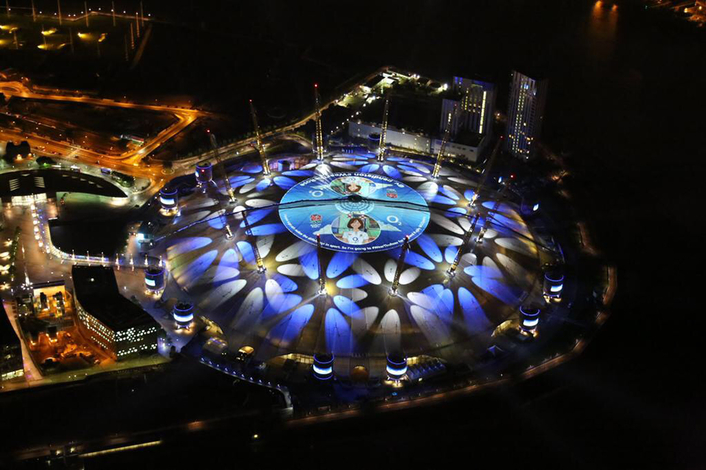 Tim Routledge explains: “This project was delivered at break neck speed from commission to delivery in a matter of weeks. My biggest creative requirement was being able to do deep saturates to achieve the two dominant colours in the display (the English red rose and deep blues matching the client, telecommunications company O2) that would be bright enough at the throws we were having to rig at.

The main logistical requirement was being waterproofed and reliable for up to 8 weeks at over 70m above ground exposed to the elements. After some testing it became clear that the traditional methods of inflatable domes were just never going to survive the wind loadings. -We even tested the domes in a wind tunnel.

We had to find a fixture that could deliver the key creative and logistical requirements and there is only one fixture in the world that can do that – the SGM G-Spot. It’s totally waterproof and in deep saturates very bright indeed. We have been blown away by their use on this project and think we could go some way with developing their use in architectural and temporary outdoor projects. SGM moved at break-neck speed with HSL to achieve the quantity along with the necessary IP rated mains and data cable we needed with a day’s notice – no mean feat”.

Speedy delivery
HSL Group worked intensively to ensure availability of all the equipment within the short time frame. M.D. Simon Stuart explains: “We got the call several days after we initially discussed the potential to use the SGM G-Spot in place of conventional lighting fixtures in domes, so we had to move very quickly to be able to supply not only the G-Spots but all the IP67 mains distribution and cabling to ensure the project would be protected from the extreme conditions that could be potentially encountered so high up on the towers”.

Simon Stuart already ordered his first 40 units of the G-Spot moving head after seeing it for the first time at LDI in Las Vegas in 2013. “My first encounter with the G-Spots was during their initial release period some 18 months ago in the USA at the LDI show, but at the time the emphasis had been that the fixture had been developed purely for the outdoor front truss on festival stages. On closer inspection by our LD’s it became apparent that the G-Spot is much more than just this, it’s extremely bright with all the features and functions that enable it to perform in all areas of the entertainment industry.
Since then and having subsequently bought the first 40 units, I’ve been really impressed with their performance, reliability and ease of servicing”, Simon Stuart says.

Being water, dirt and sand proof, there will be no accumulation of dust or externally induced impact on internal optics, gobos or the light source unit, no smoke fluid build-up inside and no humidity or moisture inside. This makes for a perfect functioning luminaire even in turbulent environments.

Simon Stuart has had positive experiences with his inventory of the G-Spot, and he informs: “The unit is completely sealed and free from any kind of water or particle ingress, so the process of maintaining and cleaning the unit is minimal in comparison to a normal unsealed moving light. So, when this opportunity presented itself, I knew that to add another 60 units to our inventory would be a good long term investment for the HSL Group of companies going forward. My only concern going forward is that I’ll probably be spending more time looking at G-Spots in the rain!!”