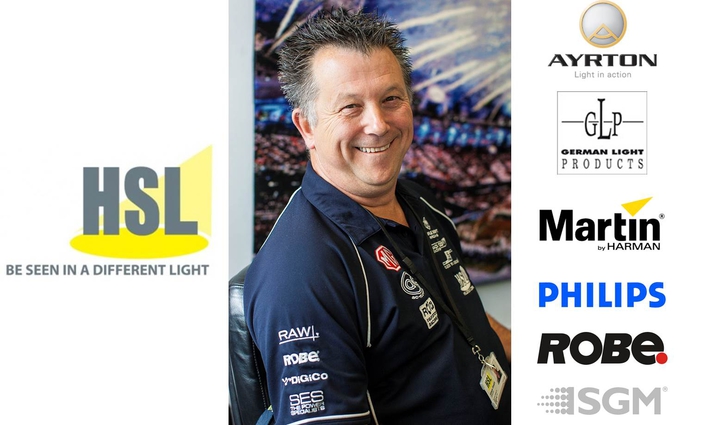 MD Simon Stuart stated, “We have a great diversity of shows out – from opera and the arts to concert and theatre touring to major sporting events - and wanted to ensure that all of them had the latest and most appropriate technology at their disposal”.

He adds that this is just the first such announcement that HSL will be making in coming months as it continues to invest in the latest cutting edge technology.

The addition of over 500 moving lights and 400 additional LED products brings HSL’s current available moving light inventory to one of the largest in the UK, which also supports and includes all the top brands.

The new moving lights are a combination of products from premium brands Robe, SGM, Martin by Harman, Ayrton, GLP and Philips.

Forty SGM G-Spots join the HSL stock – an IP rated fixture which is perfect for the numerous outdoor shows HSL continues to service in this summer. The new SGM P2 has also been added to complement the ever increasing range of IP rated units in the Architectural lighting rental division.

Joining the already extensive stock of Robe luminaires are 30 x DLX LED Spots, 60 x DLF LED Washes and 40 x DLS Profiles  – the DL series is known for its silent running and therefore great for all the theatre and orchestral shows that require low noise and plenty of punch.

They have also purchased 30 x GLP X4 LED washes and 70 x Ayrton Blades. The latter are out with The Prodigy on their summer festival rig, specified by LD Andy Hurst, together with 300 metres of the new Martin Sceptron VDO 10mm LED strips also bought for Andy’s innovative design for electro gurus, Faithless.

With all these new fixtures rocking-up at the warehouse in Blackburn, HSL also needed to boost their stock of lighting consoles … so Simon turbocharged his shopping cart and zoomed off on another spree!

First into the trolley were no less than six new High End Road Hog Full Boar consoles, four Road Hogs and four Hog 4s … which are being used for some of the larger shows. “Hog continues to be an extremely popular control platform,” comments Simon, “especially for LDs working on big rock ‘n’ roll shows.”

The hands-on buskability of Avo is also still a firm favourite, especially with the new generation of Avo products launched in the last year, so HSL lost no time in purchasing two Avolites Sapphire Touch consoles with Wings, 2 x Titan Network Processors, four Avo Quartz’s and another four Tiger Touch IIs, ever in demand with their ideal mix of power and portability!

As if 24 new consoles was not enough … HSL then added two fully loaded – 64 DMX universe - Martin M6s to that!

The vast majority of the new kit has gone straight out the door on a huge variety of projects and to rental partners within the Group.