Morrissey is Some of HSL’s Business

HSL continues its busy spring 2015 season supplying Lighting & Visuals Designer Max Conwell for Morrissey’s touring work
One of the most successful - and sometimes controversial - British contemporary artists known for his compelling lyrics, characteristic quiff, dynamic live performances and enthusiastic support of vegetarianism and ‘animal protectionism’, all great ingredients for Max who has worked with him for 11 years, making him one of the longest serving members of Mozza's touring crew.

Without the constraints of management or record company, Morrissey tours and performs prolifically without being tied in to any album cycles and other more conventional commercial considerations.

This means that his touring work has to be cost-efficient and self-supporting. Things like truck size is an important factor, onstage visual elements have to work hard and be multi-purpose and he challenges his technical team to be constantly imaginative and to deliver the best production values. 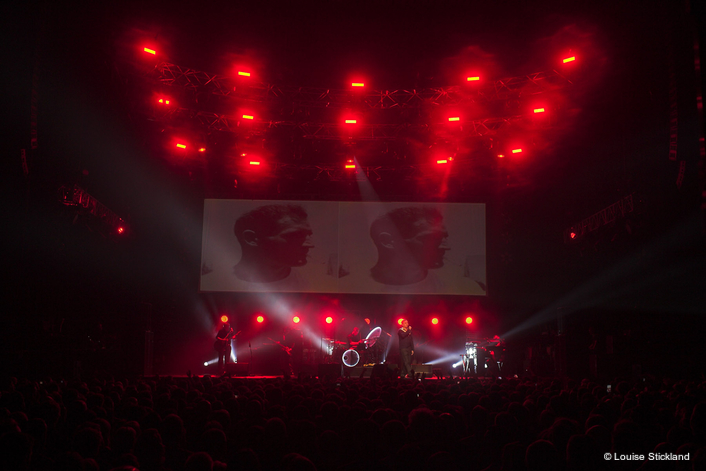 He takes an active interest in the look, sound and feel of his stage presentation, and has built an honest and heartfelt rapport with a loyal worldwide fanbase.

Since 2014, Max has turned to leading UK's lighting and visuals rental company HSL from Blackburn to supply all his touring lighting, which has been a great success.  His current tour HSL Project Manager is Sean McGlone who comments, "Max always creates a fabulous looking and inspiring show for Morrissey that's both entertaining and cerebral – like the artist". 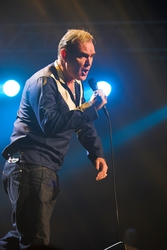 The video element of the live show has been building for the last three years and is currently based around a large upstage projection screen showing a variety of footage through the set. Much of this is iconic and people orientated and sometimes it takes a darker turn … like the extremely graphic and shocking footage for the classic anti-meat anthem “Meat is Murder. With venues required to run completely vegetarian for the night, Morrissey pulls no punches about why he advocates a meat free diet.

The video is projected via two Panasonic 20K projectors converged using the on-board facilities, all running through Max's own Hippotizer media server.

Once the main parameters of the video were established, Max started on the lighting plot which filled in and around the screen complimenting and contrasting. It was important to keep the screen clear at all times, so Max chose a double layer of lights on upstage stands which fitted in underneath the bottom of the screen which was framed above by lighting hanging off the three gently curving trusses.

The overhead trusses were combined with side trusses which meant the design effectively wrapped the lights around the band in a quirky style. “The whole ethos is about creating an appropriate environment for the music with the lighting and visuals,” explained Max.

There was no front truss, so with the band performing primarily upstage, they were front lit tidily and well from the two side trusses. The advantage of this aesthetic – especially when they get to the many classic US theatres with attractive architecture that are always on their itinerary – is that no unsightly or rude lumps of metal have to be flown in the middle of the room that ruin the site-lines. 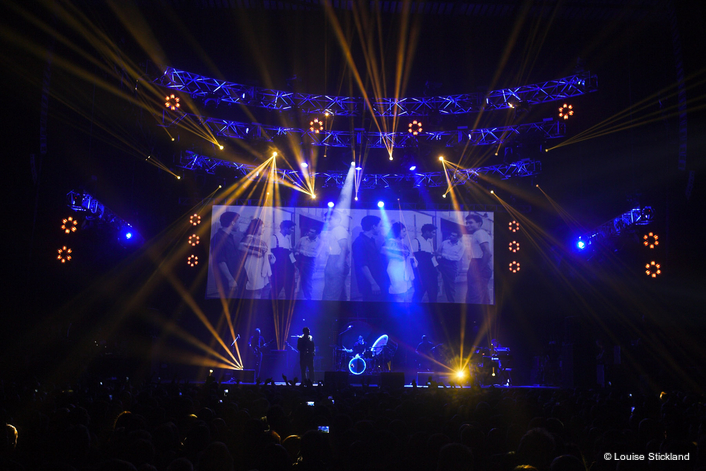 Eight upstage floor-based towers – which will form the core of this summer’s festival package - were front-clad with 32 panels of GoldPix 77 LED surface, a custom product designed by HSL comprising 500 X 500 mm panels populated with a 7 x 7 matrix of warm white LEDs. These have very narrow beam optics making them incredibly light yet robustly built and ideal for touring and making a high visual impact.

The panels can be mapped and used to create solid blocks of colour or for a wide variety of funky fluid effects - with Max taking equal advantage of both contexts. 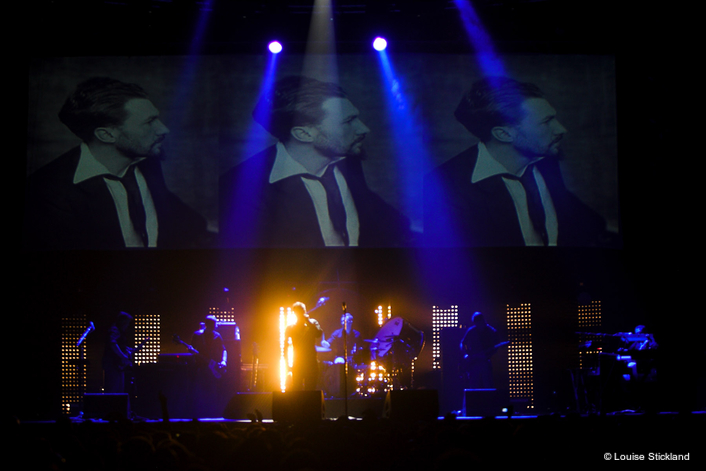 “The warmth of the tungsten really works well for Morrissey,” states Max, who also added film studio Spacelights to the rig, mainly because of their unusual flower shape which adds more idiosyncrasy.

Thirty-five Vari*Lite VL3500 Washes fitted with fresnel lenses were the bulk of the moving lights and the main workhorses of the rig. Twenty-six Clay Paky Sharpies contributed to most of the high-impact effect looks and scenes, while Robe LEDWash 600s, on top of the eight towers, reinforced the strong back-light and combined nicely with LEDWash1200s positioned on the most downstage truss that were the main band keys. The side trusses featured another six (total) V*L3500 Washes.

Three follow spots were used, two from the front with CTO filters in most of the time to keep the tungsten continuity, flipped over to contrasting CTB for a couple of numbers, and there was also a rear truss spot, used at strategic moments to define Morrissey’s highly distinctive profile.

Eight Svoboda battens were spread around the trusses utilised in one song, and a liberal splattering of Philips Nitro strobes included eight deployed on the floor and 15 over the three curved trusses, kicking into the audience and drawing them into the show – a performance trait at which Morrissey excels.

One of Max’s logistical challenges is the constantly changing set list – and with such a massive and diverse back catalogue to choose from, spanning the short and productive Smiths era and Mozza’s own highly successful solo career, Max always has a substantial amount programmed into his Road Hog 4  console. 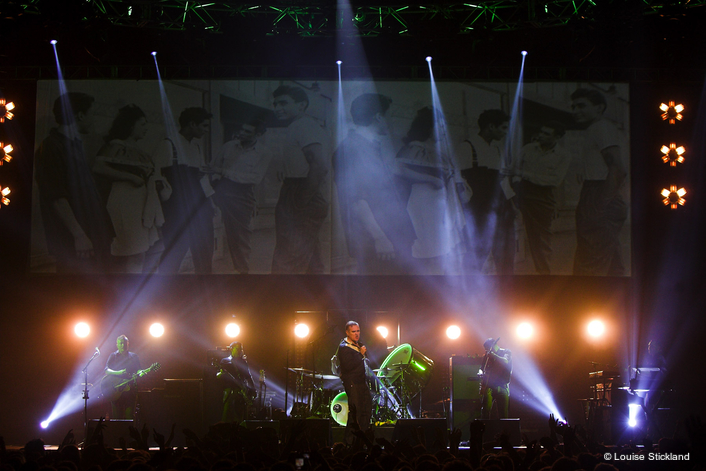 Joining him from HSL on the most recent full UK leg were Ian and Charlotte Stevens, Jake Jevons, Stuart Wright and Richard Jarvis whom he comments were “A fantastic team!” He adds that HSL look after him extremely well, and that he enjoys a highly productive working relationship with “Some great people who are friendly and really easy to work with, together with kit which is always excellent”.

Morrissey will play festivals throughout the summer and a U.S and Latin American tour are both on the cards for later in the year.