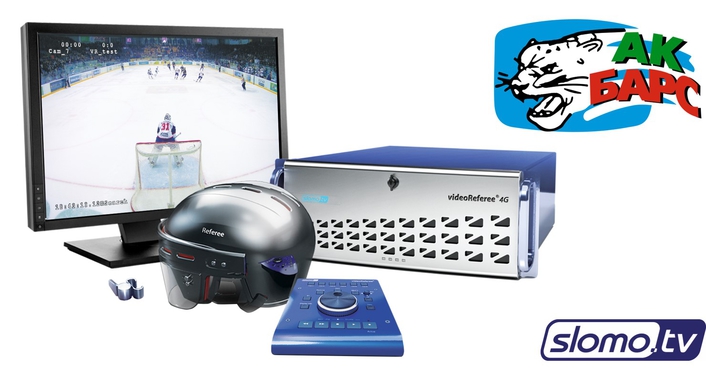 Video refereeing has become a vital element of modern Ice Hockey. Europe’s Continental Hockey League (KHL) now dictates that video referee systems are required in addition to investigating goal line incidents also to control blue line offside situations.  This requirement means that the system must be able to record and replay an additional four channels, so judges can clearly monitor all in play incidents. Following this new requirement, the Ak Bars team, based in Kazan, Tatarstan, has purchased four additional slomo.tv vR-Cam cameras and upgraded its existing system that it acquired in 2014 to the newest version - videoReferee® 4G.

Already, slomo.tv’s previous 12-channel 3G SDI system effectively doubled the recorded detail when compared with other systems and eliminated "washed" video. This superior detail allows all in-play incidents to be quickly and easily reviewed with a much better picture resolution. The system was capable of recording up to 10 channels in any combination and analyzing simultaneously up to four channels. Also, it also produces video archive recording in H.264 format.

Now, the new slomo.tv videoReferee 4G system, which will be launched worldwide at IBC2017, supports up to 16 discrete 3G SDI video channels, as well as providing the capability to work with 3G/HD/720p signals in any combination. This space saving capability is key when the system is installed within an OB vehicle environment.

In addition, videoReferee® 4G provides an extra multiviewer output for the referee's assistant. It supports the vR-Keypad, which enables the assistant to easily mark and label in-play incidents for subsequent or immediate search. The new system records time in 1/10 second increments: to achieve this level of precision slomo.tv has worked closely with more than 20 scoreboard controller manufacturers. To comply with the latest KHL requirements regarding archiving of recorded material, slomo.tv has developed batch export functionality in H.264 and XDCAM formats so that operators can start exporting with the push of just one button.

“Back in 2014, Ak Bars’ home stadium - Tatneft Sport Arena - was the first arena in the world to be equipped with 3G SDI Video Judging system. Installing slomo.tv’s videoReferee® 3G SDI enables us to gain clear vision of all details of a fast-moving and challenging Ice Hockey game and avoid critical referee mistakes,” said Arena Head of TV Department,  Andrey Dubinin . “Since then, all referees that work here remark on how efficient and intuitive this system is.

“Slomo.tv has supplied the server system and the progressive HD cameras that are fitted within the goals. After the KHL requirement changes, we have no doubt who we will ask for a system upgrade. Having a very positive experience in support and service with slomo.tv, we have selected the new videoReferee®-4G, which enables us to have up to 16 3G channels and now the new system has been delivered. Also, we have purchased four vR-Cam - 60p, supporting 3G,” Andrey Dubinin concluded.