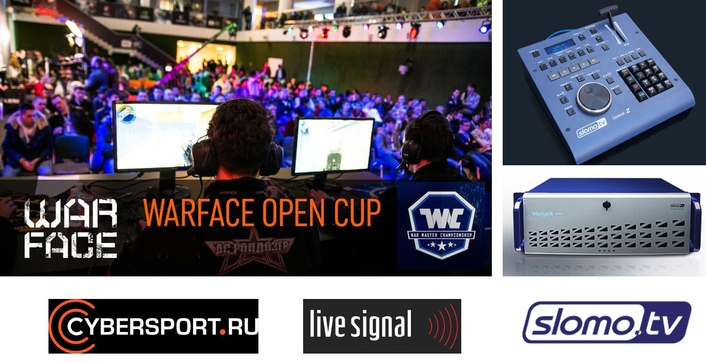 “Cybersport is winning eyeballs across the globe.  Analysts estimate that it will gain parity in viewing audiences with regular sporting events by the end of 2018. And no wonder, besides the magnetic attraction of gaming, an average person without outstanding physical abilities can easily become a top cybersport performer,” said Yegor Voronin, General Manager of Moscow-based production company, LiveSignal.Ru.  Voronin was speaking after the announcement that his production company has selected Slomo.tv to provide its Blackjack AT/3G replay servers for this summer’s Warface Championship, one of Europe’s leading cybersport events.

LiveSignal.Ru, the broadcaster of the Warface Championships in Moscow, has selected Slomo.tv’s Blackjack AT/3G servers to provide all replays during its programs. “Slomo.tv was the obvious choice for cybersport replays: powerful, easy to operate and compact, it fulfils all our needs and allows us to make significant savings in equipment and staff costs,” explains Yegor Voronin.

Also, a built-in multiviewer function of the Blackjack AT/3G enables the broadcast’s editor to sit alongside the replay operator and monitor in real-time the entire game, quickly and efficiently creating replays.

In addition, Blackjack AT/3G provides a unique feature: automatic playlist creation from instant replays. With this functionality, the two-person team can quickly prepare analysis of each game in the form of playlists for presentation after each round of the tournament.

Another factor influencing LiveSignal’s decision is the form factor of the Blackjack AT/3G server. It occupies 4U of rack space and weighs 21kg, compared with conventional 18U systems, which weigh over 100kg, so space, power consumption and transportation costs are minimized. In addition, Blackjack requires one operator to work with all 12 channels, whilst 266 hours of SSD HD video storage allows all the content shot over the three days of the tournament to be stored within the server. Newly developed system architecture and the availability of four video ports provide the user with significant scope to create the optimum 3G video workflows for their productions with no additional equipment requirements.

About Slomo.tv
Established in 2007, the company has successfully introduced complete lines of high quality multi-channel professional recording and instant replay products. Slomo.tv has brought to market a number of effective solutions for tapeless video production technology. Slomo.tv systems, such as Dominator and Simple R, are widely used on major TV channels, and the company’s video judging system for sports, videoReferee®, has become an integral part of many sport arenas worldwide.