The International Broadcast Center (IBC) for the Olympics in Rio 2016 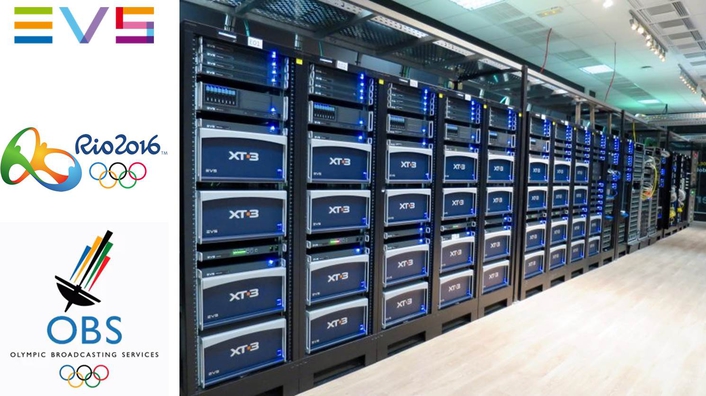 The host broadcaster for every Olympic Games, Olympic Broadcasting Service (OBS) has a permanent base in Madrid where it has a full-time staff of 150. That workforce has swelled to around 7,100 for Rio 2016, with an army of freelancers taken on to bolster its technical, editorial and administrative operations.

There are two buildings making up the IBC in Rio. Staff and visitors enter through the operations building, an administrative hub where broadcasters can book rooms or liaise where required with the city. This is also the place to find the spectrum desk, where every camera and piece of wireless broadcast equipment must be accredited and fitted with a barcode. With 27,000 people making use of the IBC over the course of the Games, there is a lot of equipment to register. 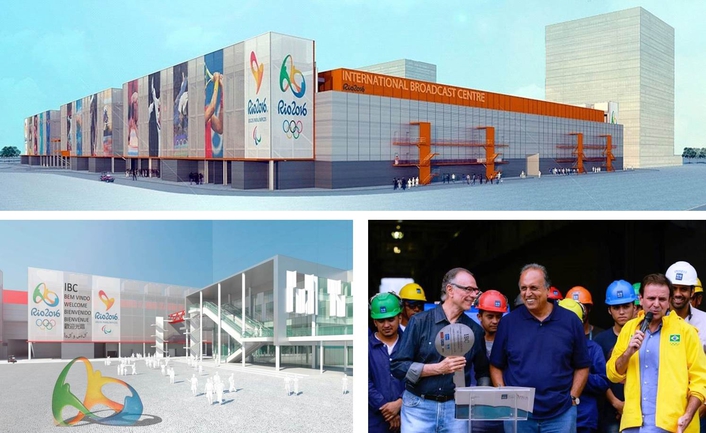 Technical staff will go past the spectrum desk and into the main building at the IBC. For the first time ever the wide range of production and technical services provided by OBS is completely tapeless. A combination of dozens of EVS XT3 servers, hundreds of EVS IP Directors and other EVS technologies play a key part in leaving tape behind. The EVS server farm is much, much larger than the system for the London games as there are more feeds and the Multi-Clip Feed services didn't exist in 2012 so that makes 12 more feeds to log. And there are all the mixed zones and interview areas. On the first two days there were already 70,000 logs per day.

Getting the EVS side of the facility up and running required 15 EVS support personnel to be on hand (currently nine EVS staffers managing the project during the games). There are 33 EVS XT3 servers on hand for OBS at the IBC, providing 167 channels of ingest (more than 160 IP Directors can be find throughout the facility). Most of the servers are six-channel units while the mixed zone units feature 12 channels.

The main equipment room houses the servers that store footage from around the Games. There is, however, a running back-up created on another site so that live Olympic coverage is reduced, but not suspended, in the event of server failure.

The content on the servers are not only available to the Olympic RHBs inside the IBC but also to 56 broadcast facilities around the globe that have remote access (including IOC facilities in Lucerne, Switzerland and OBS facilities in Madrid, Spain). Aspera file acceleration technology is making sure that content is quickly and securely available where needed. 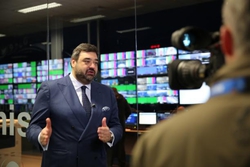 Logging is a crucial part of the tapeless workflow. Within the IBC is a logging area with 55 IP Director logging stations so that metadata can be associated with content for each distribution circuit from the venues. Additional IP Director logging stations are on hand to handle the Multi Clip Feeds, quality control for interviews, and then scheduling and media management, bringing the total number in the logging area to roughly 70.

As always, the Olympic Games are a time for OBS to deploy new technologies to meet the needs of the RHBs and to also tell the stories of an event in new and compelling ways. For example, the Rio Games will see more than 50 super-high-speed camera systems to give new emotional impact to dozens of sports. And some of those cameras will be mini POV units, capturing the action in a way that was previously impossible.

The process of producing live Olympic coverage is split into four parts, under the acronym CDUT. The ‘Contribution’ unit receives images from the hundreds of cameras set up around the 32 venues. The ‘Distribution’ team sends ‘unbiased’ multi-lateral footage - the international feed with no specific country focus - out to broadcasters. 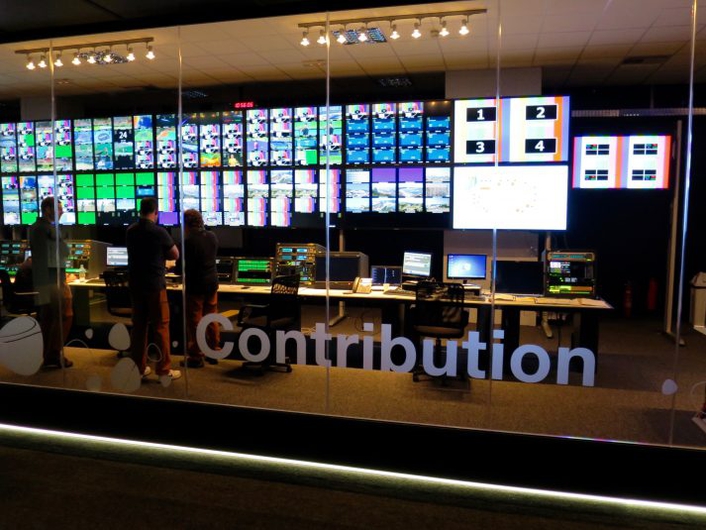 Then there is the ‘Unilateral’ section. Individual broadcasters, should they so choose, can purchase the use of cameras and positions to direct their own national view of events, picking out relevant athletes or spectators. Finally, once commentary has been appended to the appropriate coverage at the commentary-switching center - which will process around 1,300 feeds over the course of Rio 2016 - it goes for ‘Transmission’. 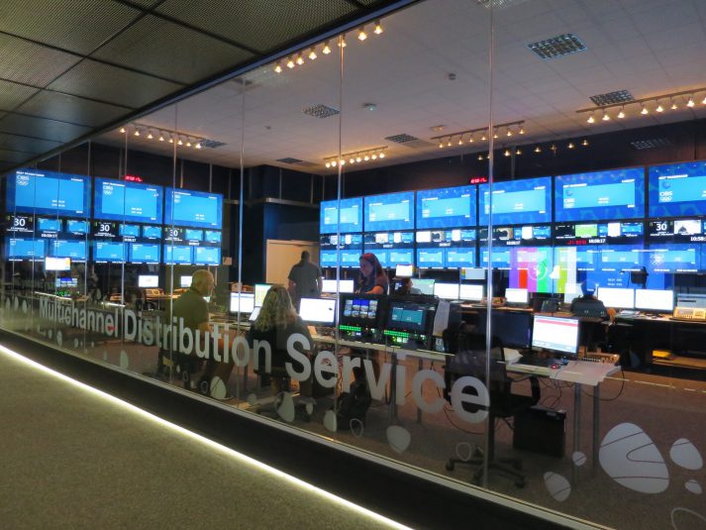 EVS C-Cast technology is also part of the OBS workflows for hockey, rugby, football, and golf coverage. The first three sports find the technology being used to create multi-angle replays of goals that are then pushed through the OBS publishing system and made available to users of the Olympic Video Player (OVP) as well as to broadcasters in the IBC.

Golf coverage will use C-Cast to help create video clips and packages about players and coverage that was not able to make it in live event coverage. Golf is also making use of EVS Multi-review technology which allows for an editor to call up all the camera angles from, say, the 10th hole and then quickly see them all on the screen at once via a multi-view and then quickly cut a clip making use of any angles available.

Another service making its Summer Olympics debut is the Multi Clip Feed Service, which was launched successfully at the 2014 Sochi Games. For the Rio Games, there will be 10 concurrent feeds featuring unseen camera clips and angles (and, beginning 45 minutes prior to the start of the match, things like warm-ups, venue atmosphere, crowd shots) for 18 sports, including aquatics (diving/swimming/synchronized swimming), basketball, boxing, canoe (slalom), cycling (BMX/mountain bike/track), equestrian, handball, rugby sevens, taekwondo, volleyball, and beach volleyball.

And a service that has been expanded over the 2012 Games is the multichannel distribution service. This year, it will provide RHBs with 13 ready-to-air channels of content (plus the Olympic News Channel, a 24/7 channel with news coverage and highlights) and will be key in enabling RHBs to deliver multiple channels of content while minimizing production costs.

Also new this year will be virtual-reality and 360° video content for a number of events: Opening Ceremony, beach volleyball, boxing, fencing, artistic gymnastics, athletics, diving, basketball, and Closing Ceremony. OBS will provide three camera streams plus one integrated feed for each event.

However the real showstopper comes courtesy of Japanese broadcaster NHK. It is trialling its Super Hi-Vision 8K technology at Rio 2016, with resolution twice that of 4K and 16 times that of high definition. OBS is treating visitors to live 8K screenings of events from the Games in a custom-created cinema room. Swimming heats from the Olympic Aquatics Stadium and athletic events from the Olympic stadium are an excellent vehicle. 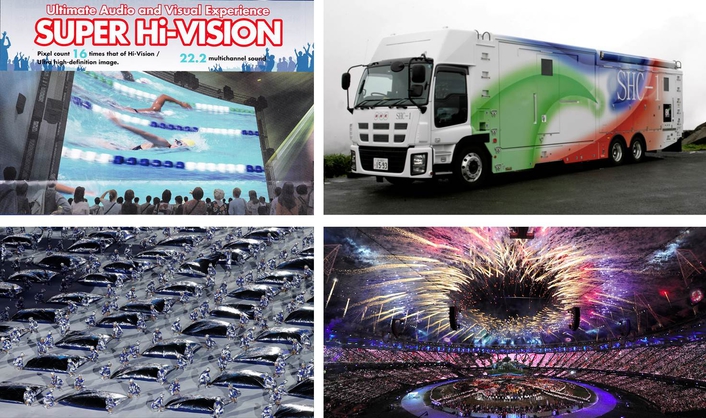 Paired with 22.2-channel surround sound, watching sport in 8K is a remarkable experience. There is a marked leap in clarity from HD, with the viewer’s eye taken to details that would go without notice in the flesh but would not be visible in a regular broadcast: the creasing of clothes, the rippling of the pool’s surface, reflections of light in each swimmer’s cap and the running water on their skin.

And the sound quality is perhaps more astounding. Calls and cheers can be heard from all over the arena, almost forcing the viewer to look round for their source, while noises like that of the tannoy or starter’s whistle echo convincingly. When one of the swimmers strikes his starting block, it makes a satisfying thwack. To use a recurrent but in this case quite accurate industry trope, it really is as close as you can get to being there.

The expense of 8K is such that it will no doubt be some years before it is ready for mainstream consumer use, but its more extensive application at Tokyo 2020 is a racing certainty.

The Rio Games: By the Numbers
Numbers can often tell a story, and that’s true with the Olympics. Here are some key figures from OBS: