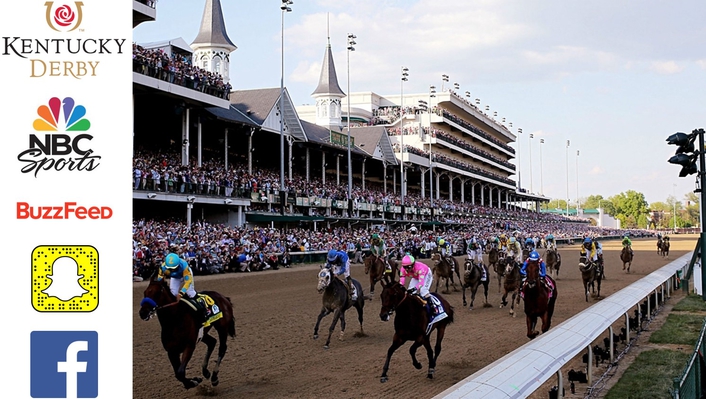 There’s a lot of rain in the forecast — and Saturday’s 143rd running of the historic Kentucky Derby could be a sloppy mess — but that won’t stop NBC Sports’ digital and social-media teams from blanketing Churchill Downs in all kinds of in-depth coverage for various platforms writes Brandon Costa, Director of Digital for Sports Video Group (SVG).

NBC Sports’ coverage is not just to bring the Kentucky Derby to many of the various platforms across the digital landscape but to weave that content into the linear production of the festivities leading up to the race.

NBC Sports has three of its own social-media producers onsite in Louisville, and, in a completely new partnership, BuzzFeed has five staffers at the track to produce unique, lifestyle-themed content surrounding “The Most Exciting Two Minutes in Sports.”

NBC is teaming up with BuzzFeed to build and push content both on Derby Day and in the week leading up to the event. Buzzfeed’s popular food-based Tasty platform has been posting Kentucky Derby-themed recipes to its social-media pages all week, and NBC plans to integrate those videos during the five-hour linear television show on Saturday.

As is the trend with many major sports events lately, Facebook Live will play a major part in the overall production as well. The NBC Sports Facebook page will feature live content offering an inside look at what it’s like to attend one of sports’ biggest events. Some of the programming plans include live video of the sun rising over Churchill Downs, a special appearance by the NHL Stanley Cup, and an interview with NHL analyst and horseracing fan Eddie Olczyk.

SnapChat will also see plenty of Derby content on its platform. Users will have filters and will be encouraged to share content from the track or their parties in their homes. For the first time, NBC Sports will weave the larger Kentucky Derby live story into the linear telecast.

Naturally, the entire event will be live-streamed on NBC Sports’ website and mobile app.