One could say that Tuacahn Center for the Arts, the 42,000-square-foot arts center located in the mouth of Utah’s Padre Canyon, is steady as a rock. Not surprising since it’s located adjacent to the Snow Canyon State Park and features a canyon carved from the red and white Navajo sandstone in the state’s Red Mountains. 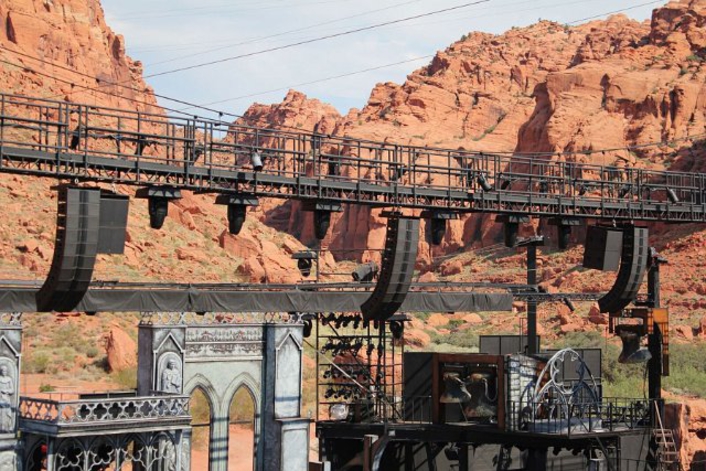 For the last ten years, that was assured by an L-Acoustics dV-DOSC sound system. Beginning this year, Tuacahn entered its next decade with great sound from a newly installed L-Acoustics Kara line array system. Installed in April by Poll Sound, which also installed the previous dV-DOSC system, the new rig consists of an LCR three-hang array of 11 Kara boxes each, as well as four SB18 subs flown two per side outboard of the left and right main hangs

Further rounding out the new L-Acoustics system complement are 14 coaxial X8 enclosures used for low-front fills and stage monitors, and a dozen larger X12 enclosures: eight facing forward from the rear of the stage and four used for on-stage fills. The entire system is powered by six LA8 and six LA4X amplified controllers.

“The dV-DOSC sound system worked incredibly well here for ten years; it was subjected to intense heat during the days and rain and other elements year-round, but it never let them down,” recalls Deward Timothy, Poll Sound’s Owner and President, referring to temperatures that routinely hit 105 degrees Fahrenheit during the day. “We recommended the Kara as the best choice for a new system to follow that.” 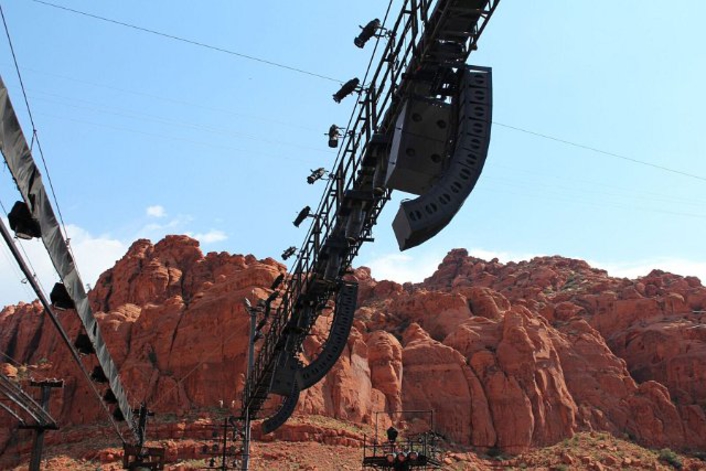 Timothy was familiar with the challenges of flying a large line-array system in an outdoor environment like this—a catwalk was able to be constructed around the weight and other requirements of the system—but this time it was compounded by a tight schedule, which saw Poll Sound technicians working in the rigging while the season’s first show was in rehearsals. Much of the system tuning was consequently done at night.

But as well as dV-DOSC accomplished covering the venue’s seating area and keeping sonic energy off of the rock walls, the Kara system has improved on that. “The coverage is exceptional—incredibly precise,” says Timothy. “With the dV-DOSC we were using Lab.gruppen amplifiers and Lake processing, which needed considerable tuning. But the Kara is a much more integrated system, with its own FIR filters and distance-loss compensation calculations. It’s uncanny how the system is so perfectly tuned from top to bottom. There’s tons of gain and the kind of precise coverage that’s hard to achieve outdoors. The theater operators are immensely happy with it, and so are we. Here’s to ten more years of L-Acoustics there!”

L-Acoustics
Tuacahn Center for the Arts