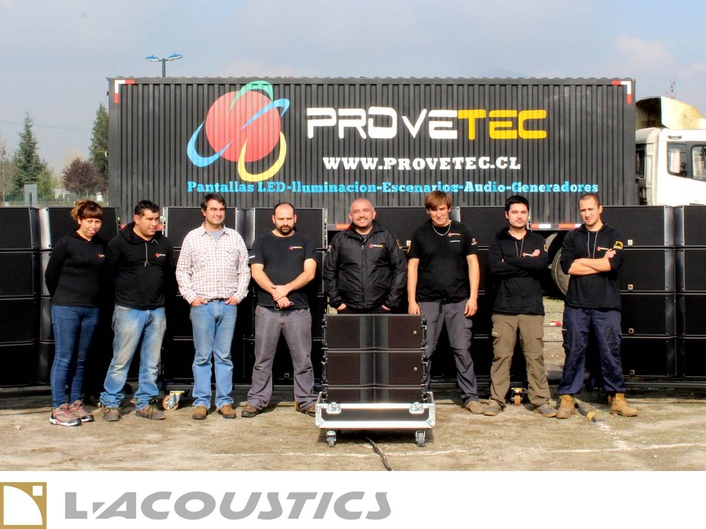 Provetec is one of Chile’s leading technical production companies, working on vast array of key events across the country. Earlier this year, it made a major investment in an L-Acoustics K2 loudspeaker system, the first of its kind to arrive in Chile.

“Two years ago, Provetec bought a substantial Kara system and it has worked very well for them,” explains Cristian Osorio Fuentes from L-Acoustics Chilean distributor VGL, who sold the system to Provetec. “When they decided they wanted to increase their L-Acoustics inventory, the next logical step for them was invest in K2.

“This is because K2 is incredible; the quality of sound it produces for the big spaces is perfect and it has no competition as far as long throw is concerned. K2 has the sonic signature associated with L-Acoustics, excellent definition and control of cover, as well as a fantastic rigging system.”

Cristian is sure that having K2 in its inventory will help to further increase Provetec’s penetration of the Chilean market. “K2 makes a difference to sound systems the world over,” he says. “Together with K1, it is the most popular system on international riders.”

Provetec’s system includes 24 K2 cabinets, 16 SB28 subs, four LA-Raks and the aforementioned rigging system. The company is waiting for Chile’s high season to start before it puts its K2 system to full use, when it is already earmarked for various festivals.

“Provetec is really happy with the new K2 system,” says Cristian. “Ricardo Marques, the company’s owner, is a big fan of L-Acoustics in general. He has always trusted them and loved the sound of the brand’s products from the very beginning. That’s why he knew that L-Acoustics was the best choice for his new system.”

“We are very happy to have Ricardo and Provetec on-board with K2,” concludes L-Acoustics Sales Manager Tim McCall. “Their successful experience with Kara has proven what an effective, flexible and profitable package L-Acoustics can offer and that has allowed them to take the next step up to the equally impressive and flexible K2. This system is going to prove very popular with the coming festival season.”