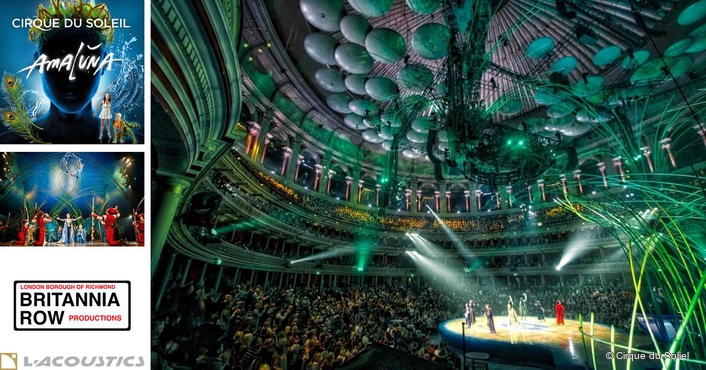 A key part of the audio is soundscapes, sound effects and musical elements that follow the actions of the show’s performers. Ten L-Acoustics 108 XTis were installed at the Grand Tier level for the stalls, with 12 on the gallery to cover the circle

Ever since the first use of a PA system beneath its domed roof, London’s Royal Albert Hall has been a famously difficult gig for mixing engineers, due to its circular construction, which results in a highly reverberant space. Thanks to L-Acoustics, however, Amaluna is maintaining a grand tradition of great-sounding Cirque du Soleil shows at the venue.

Running from mid-January to early March, Amaluna marks Cirque du Soleil’s 20th anniversary of Albert Hall productions. A re-telling of Shakespeare’s The Tempest, female performers make up the majority of the cast and the entire accompanying band. The set is as lavish as one would expect from Cirque du Soleil, with stylised trees hanging from a central truss which, as well as supporting airborne acrobatics, also accommodates the main L-Acoustics hangs.

The production’s head of sound, François Lanteigne has mixed over 200 shows in the venue and knows that L-Acoustics has the secret of taming its challenging acoustics. He worked with Britannia Row Productions to create an L-Acoustics Kara sound system for the show.

“Amaluna features a powerful musical score that’s more rock infused than most Cirque productions. I’ve worked with L-Acoustics systems for over 12 years now, and after hearing L-Acoustics Kara at different concerts, I knew it would be perfect for this show,” he says. “Kara delivers a very precise focus on the vocalists, but without compromising the power to size ratio. The rest of the mix was very easy to translate into the configuration required to achieve that.”

François worked with fellow system designer Pierre Sanschagrin to map the system using L-Acoustics Soundvision software. The results proved highly accurate. “There is a lot of magic going on in that software,” François continues. “Those tools are extremely useful, if not essential, especially with the tight schedules involved in this kind of production.”

The outcome was a design comprising a main system of six hangs of 12 Kara, with two SB18 subs on two of the arrays and two stacks of three ARCS Focus as floor fills for the seating area directly around the stage. System amplification is via LA8s, which also handle the processing and EQ. 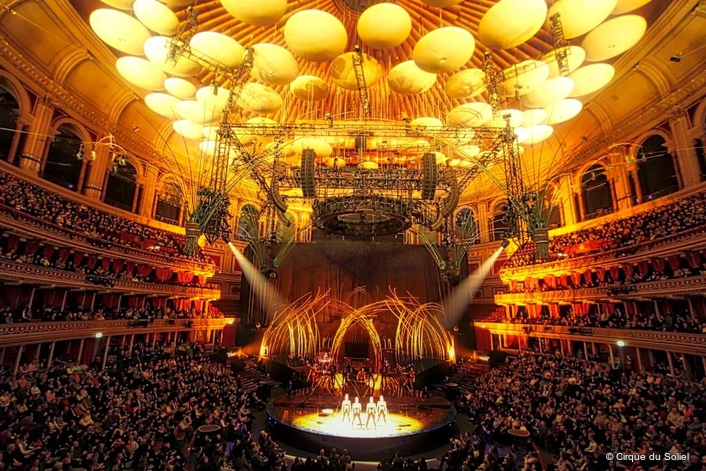 Six hangs of 12 Kara, with two SB18 subs on two of the arrays and two stacks of three ARCS Focus as floor fills for the seating area directly around the stage. System amplification is via LA8s, which also handle the processing and EQ

“The low end was challenging as they didn’t want anything on the ground for aesthetic reasons. I didn’t want any subwoofers under the floor - because the result is more mechanical than musical - and we couldn’t put them at the same height as the hangs because of the acrobat rigging systems,” says François. “We ended up flying two centre clusters on a spanner truss higher than the mother grid, two K1-SB subs in the back and higher than a stack of four further K1-SBs. Once properly aligned, the low end was steered down and it worked out very well.”

A key part of the show is the soundscapes, sound effects and musical elements that follow the actions of the show’s performers. To ensure every section of the audience was covered, ten L-Acoustics 108 XTis were installed at the Grand Tier level for the stalls, with 12 on the gallery to cover the circle.

“Every section of seating has some degree of ‘ambiophonic’ sound. The surrounds are part of a distributed system, with audio routed to highlight the movements and trajectories needed for specific effects,” says François.

Another key to overcoming the Albert Hall’s acoustic challenges was the wide horizontal dispersion of the Kara loudspeakers.

“I’m used to playing in a tent that has the audience seated 270º around the stage, which makes it very difficult to achieve a consistent image,” says François. “The circular shape of the Royal Albert Hall is no different and there is a lot to cover, especially vertically. I had the luxury of rigging points pretty much where needed, so we were able to bring the six Kara hangs very close to the centre, above the stage, high enough to be out of the way of the acrobatics and any sightline issues. The 110˚ horizontal dispersion has really helped to achieve the coverage needed. 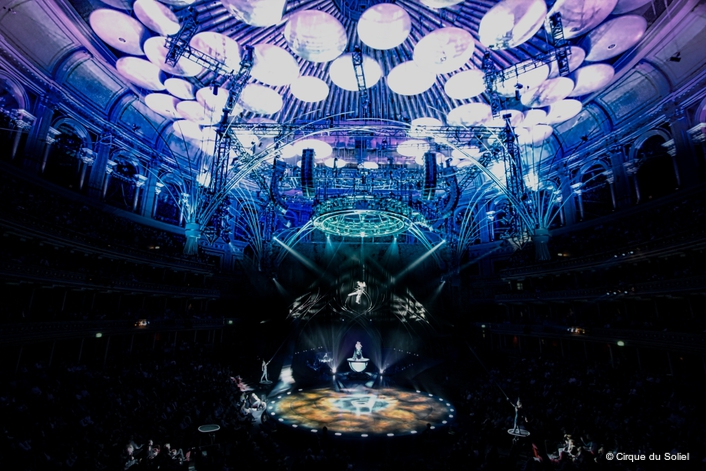 “I can honestly say that the system for Amaluna is the best sound I have achieved in the Albert Hall. We have really got something special. It is smooth and practically seamless, with nice imaging for every seat.”

About L-Acoustics
Founded in 1984 near Paris, France, L-Acoustics is a leading manufacturer of turn-key solutions for the professional sound industry. With 320 team members, 20 percent of whom are dedicated to R&D, L-Acoustics is present in over 75 countries either through subsidiaries or via a network of certified distributors or providers.
Recognized throughout the industry for pioneering the modern line array, L-Acoustics offers a total system approach for both the touring and fixed installation markets, and a product line responding to the needs of venues from the most intimate club to the grandest arena. L-Acoustics sound systems can be heard in places like the Hollywood Bowl, the NBA Houston Rockets Toyota Center, or the Philharmonie de Paris. L-Acoustics solutions have been used at seven of the world’s ten top-grossing festivals*, the London and Sochi Olympics, and on the Foo Fighters Sonic Highways World Tour, among others.