Time for Robe and Holiday on Ice

Lighting equipment is being supplied to the production by Bemmell, Netherlands, based rental specialist, Rent-All

Holiday on Ice producer Kiki Venhuizen and new executive producer Jay Smith contacted Live Legends when looking for a new integrated design that would encompass lighting and video visuals for the re-launch of ‘Time’ (the original show name was ‘Speed’), which has been a big hit with audiences throughout Europe.

Live Legends’ work embraces all sectors and genres – concerts and live music events, TV and theatre productions, corporate and industrials … but this was their first ice show. 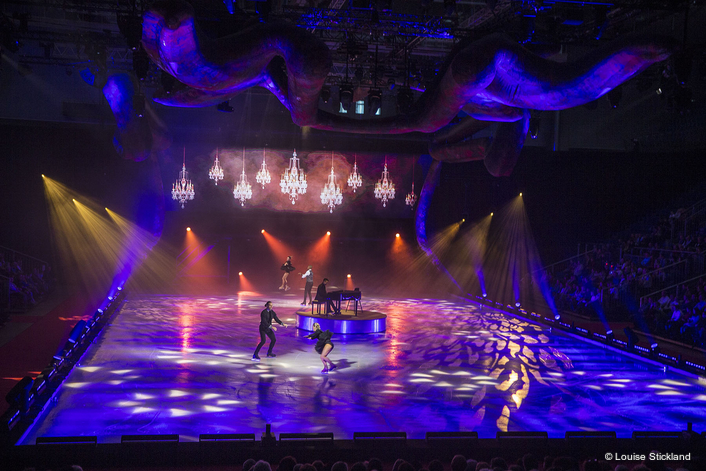 “Holiday on Ice was looking for a fresh approach,” said Jeffrey who has been using Robe products in his work for about four years, and it’s now one of the go-to lighting brands for him and others in the Live Legends’ design team.

Time’s set elements include a large inflatable which wraps around parts of the trussing mother grid, and also a moving bridge that runs up and down the ice, which were already in place when they came on-board, so lighting had to be positioned around and work with these. 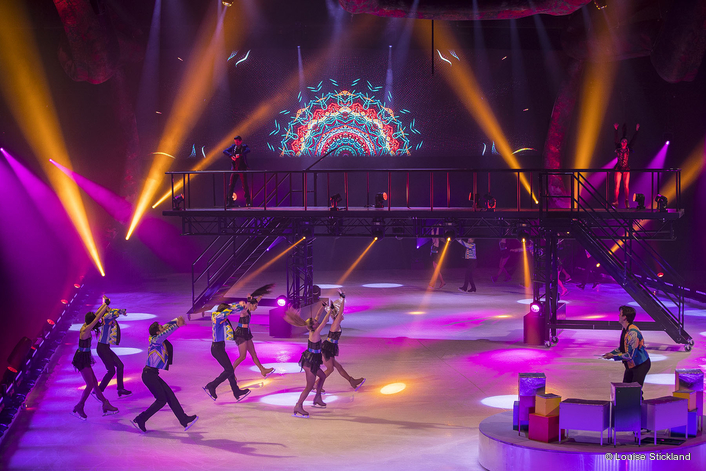 The show includes a lively and diverse mix of music, from orchestral classics to vintage Frank Sinatra, musical blockbusters to rock ‘n’ roll and the latest pumping EDM tracks, all of it fluidly choreographed into a pacey collage of drama and style and movement.

Lighting and video needed to match the velocity and all the contrasts, so while there was lots of scope … it was also a real challenge. “We really needed to create a huge range of looks and atmospheres” says Jeffrey, “for which Robe BMFL Spots, Pointes and CycFX 8s were an ideal solution”. 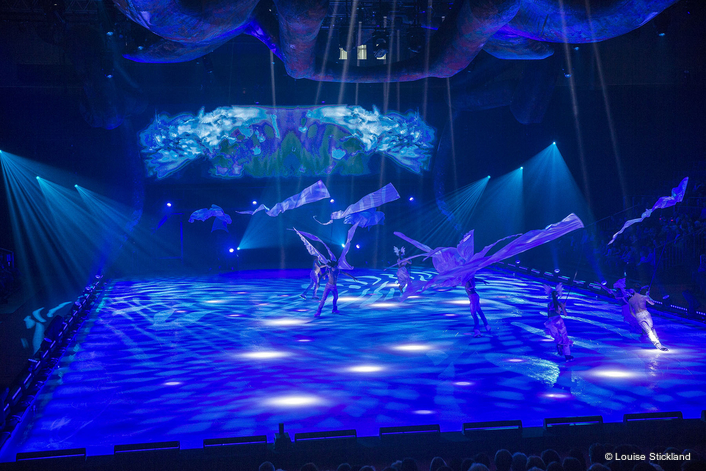 The 71 x CycFX are arranged in clusters above the ice and all around the perimeter of the performance area at ground level, and are used to wash large areas of ice in blocks of intense colour. They work perfectly for a basic layer of ‘environmental lighting’ and they are also used as a light curtain during scene changes which is “highly effective” comments Jeffrey.

He observes that with the LED cells of the CycFX 8s being recessed neatly into the fixture, they don’t get into the eyes of the audience in the front row seats when in this floor based position. 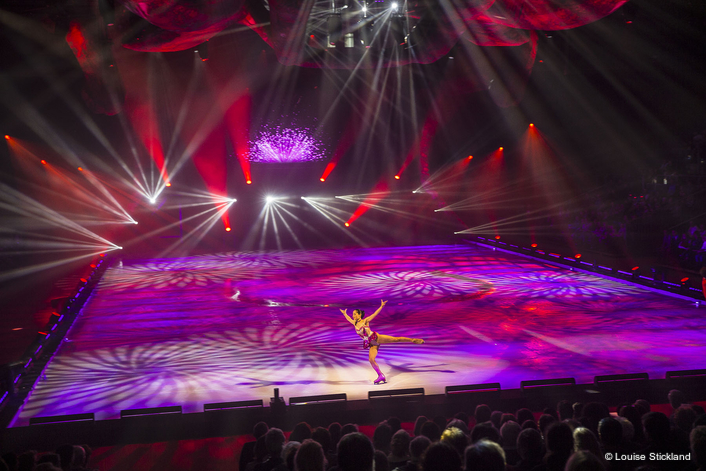 The 46 x Pointes are dotted all around the overhead network of trussing - fitted into the spaces left by the inflatable - with some rigged on the bridge.

They are used for multiple effects. Utilising the zoom and frost filter combined, they can completely fill the ice when needed, and Jeffrey chose this fixture for all the flexibility and options this “small, light, bright and diverse” luminaire brings to the show. 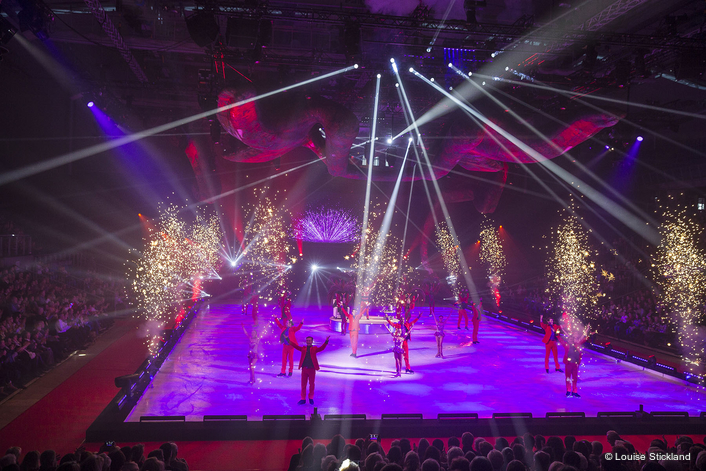 Fifty-four BMFL Spots, which Jeffrey loves, were picked for their brightness, colours, gobos, speed and beam looks. “They can simply do so much … produce so many different effects” he enthuses, adding that as with the Pointes, they needed fixtures that could do several jobs to cover the range of music and moods of the show segments.

Each section is lit slickly and imaginatively, bringing luminosity colour, drama, humour and movement to the floor … working seamlessly with the skaters.

There are over 1600 cues in the lighting desk which was programmed by Thomas de Vries and is run mainly to timecode from the music tracks, with a few manual cues. 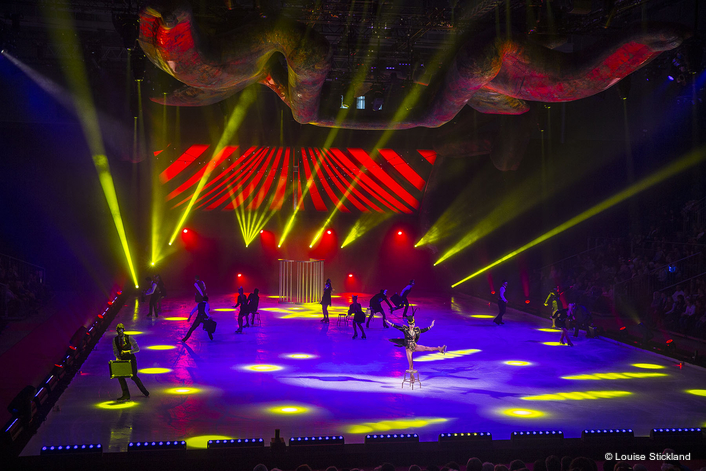 Live Legends also created all Time’s video content which appears on a 17.5 metre wide by 4 metre high LED screen at one end of the ice. Rody van Gessel was the d3 server programmer, Ad de Haan art directed the video content and Joep Veldhuizen was the main content creator.

Lighting equipment is being supplied to the production by Bemmell, Netherlands, based rental specialist, Rent-All.

Jeffrey and his colleagues at Live Legends have been specifying Robe regularly in their designs since the Pointe was launched in 2013. “This fixture really put Robe on the map for us,” he said. During one of his visits to the Robe factory in the Czech Republic, he caught a glimpse of the BMFL in pre-production, which made him realise that Robe was “seriously upping the game”, and since the launch of the BMFL series in late 2014, he’s been a firm advocate of the brand.

“The BMFL range is really amazing. It has taken everyone to a new level, and along with the DL range and the LEDWashes, there is now a complete range of really great Robe units that can be used for all aspects of lighting”.