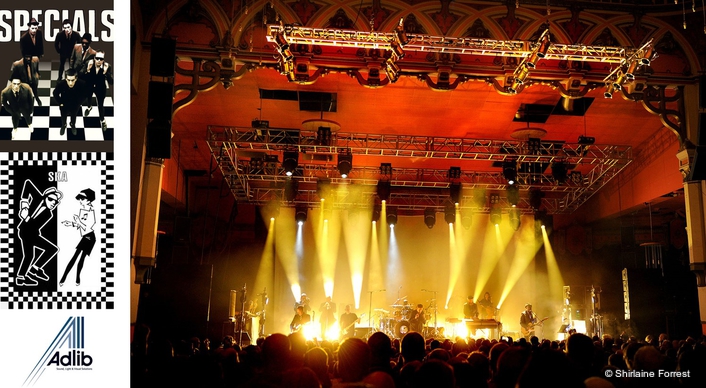 Adlib is supplying lighting and sound to the current The Specials tour which sees the UK’s favourite 2 Tone and Ska revival band take their energy, politics and rocksteady beats around the country to their wide and loyal fanbase. Mike Darling is again the charismatic and friendly Production Manager for the tour.

Adlib's Simon Pettitt designed the lighting. It’s his second tour with The Specials in the LD role following a successful autumn 2014 campaign, at which point Simon was freelance before joining the award-winning Liverpool company full time in 2015.

Simon’s concept for the 2014 run was formulated after meeting with the band, where references ranged from David Byrne to Pina Bausch. The design was repackaged and refreshed for the 2016 tour, largely remaining unchanged but taking the opportunity to clean up the floor package design into cleaner lines of fixtures.

The show takes a distinctive ‘clean’ theatrical look – with no video or imagery to distract from the band’s performance. “Even using gobos would create too much visual detail and complexity – I’m looking for solid, bold blocks of light,” says Simon. “The main components of the design are the movement between back, top and side light, the movement between white and pastel tones and the use of shadows, silhouettes and perceived distance,” he adds.

This concept extends to the backdrop – a white sharkstooth gauze – which is a basic, yet versatile, surface which can frame the stage as a white block, act as a projection surface for shadows or present a bold block of colour when necessary.

Above the stage are three ‘conventional’ 40’ trusses - front, back and mid - plus kit on the floor which is distributed between two upstage carts and four side booms.

All the flown fixtures are Martin by Harman MAC Vipers, 10 Profiles and 14 Washes - Simon loves the flat-field quality of the beams and the natural white balance of the lamp as well as the the wide and consistent colour gamut. “I use open white for a lot of the show, so whatever I take has to have a good-looking source – and the Viper’s open white is my favourite”. The four Viper Washes on the Front Truss are almost exclusively used to light the gauze backdrop. 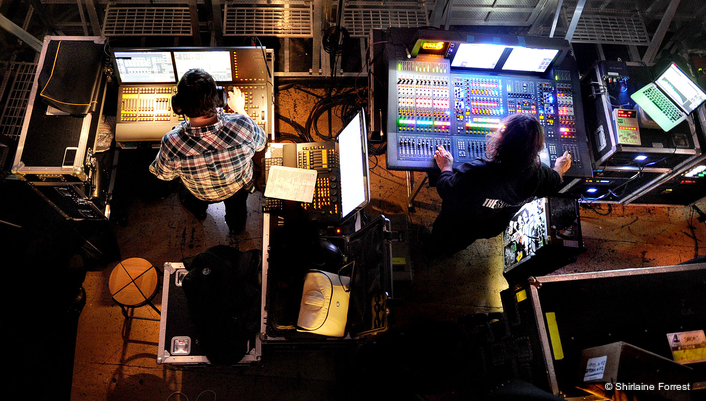 A Bird's Eye View of Front of House

Rigged on the rolling carts - made up from Prolyte S36-PRT 3m pre-rig truss fitted with custom-made boards to facilitate the top positions - are another six Viper Profiles, together with six ProLights Solar static LED wash fixtures and 6 x Chauvet Strike 4 LED Moles hung underneath.

Simon likes the Strike 4s for their sheer brightness and the full ‘classic’ Mole effect as well as the option to fade or snap them on and off.

Each of the four side booms are rigged with two MAC Aura LED wash moving lights and one Solar flood, and the floor count is completed with six MAC Auras along the downstage edge of the stage – mostly used for projecting shadows of the band on to the backdrop.

From this well-designed expedient rig Simon can get a huge amount of variety, he explains. “I rely on timing, angle variation and pastel tones to give me options over the length of the set”. “Although there are obviously a few songs – Rat Race, Monkey Man, for example – where aerial work is in order”.

While the subtleties, whites and pastels are plentiful, there are also some big saturated colour looks to break it up - around 20 per cent of the show includes rich colours which make big statements and accents supporting the band at strategic moments.

The console is an MA2 light, Simon’s desk of choice, which is being run in conjunction with a grandMA onPC Command Wing system as backup.

The challenge on this tour is dealing with the diversity of venues, involving shrinking and expanding the floor package to fit the stage each day so Simon can get the variety of angles he needs. The carts help with this task and enable him to squeeze 18 fixtures into 60 cm of depth ... without encroaching on anyone else’s stage!

Working alongside Simon on the tour are Adlib crew Jeff Bond and Alex Burrows.

Co-ordinating the audio side is Adlib’s Jay Petch as systems engineer and monitor guru Marc Peers, who are together looking after Specials’ engineers Marcos Ferrari (FOH) and Chris Wood on monitors.

Jay and Marcos specified the system together, choosing an L-Acoustics K2 system for its flexibility and light weight.

Playing the wide selection of venues on the itinerary, there isn’t always the option to fly and when there is, there are also tight weight-loading limits to deal with, so they wanted a lightweight system that worked equally well flown or ground stacked.

The largest configuration is 10 x K2 elements flown each side, or six per side ground-stacked with K2 screw jacks. 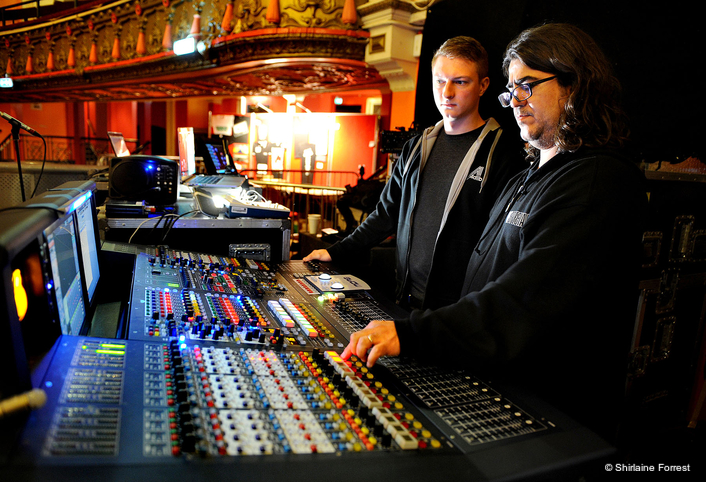 At Work at FOH

These are running in conjunction with 12 of the new L-Acoustics KS28 subs which are proving excellent for the all-important groove section and the distinctive ska sounds that the Specials have made their own with hits like “Too Much Too Young” and “Ghost Town”. 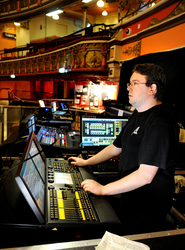 Where possible, the subs are arranged in clusters of two high stacks at 1-metre intervals across the front of the stage to create a sub arc, for the best low-end coverage throughout the room.

This is complimented with 6x L-Acoustics dV-DOSC speakers and 8x ARCS IIs. Having these at their disposal is useful for filling any coverage gaps and voids around the various rooms.

LA8 amplifiers power the main system with the new LA12X driving the subs.

Marcos' FOH desk of choice is a Midas PRO6 with which he's using some classic outboard delays and reverbs, including gems from the analogue era like a Yamaha SPX2000 digital effects processor, Lexicon PCM91 and 480L reverbs and a legendary Roland Space Echo which is prominent in the vibrant and complex ska sound.

The FOH effects are being fed into the console via a Midas DL451 rack and the onstage mic preamps are via two Midas DL431s.

In monitor world, there is a feast of wedges, with 10 of the new ADLIB MP5s - an updated version of the popular Adlib creation featuring a black sprayed paint finish and a new more powerful, lightweight 15” driver. These are driven by Lab Gruppen PLM10K amps.

There is also a rack of six Sennheiser G3 IEMs for the strings, brass and keyboard players and an Adlib MP4 sub for the drummer. The side fills offer plenty of oomph with two ARCS and an SB28 per side. The console is a Soundcraft Vi3000 with the inputs fed via a Vi Stagerack. 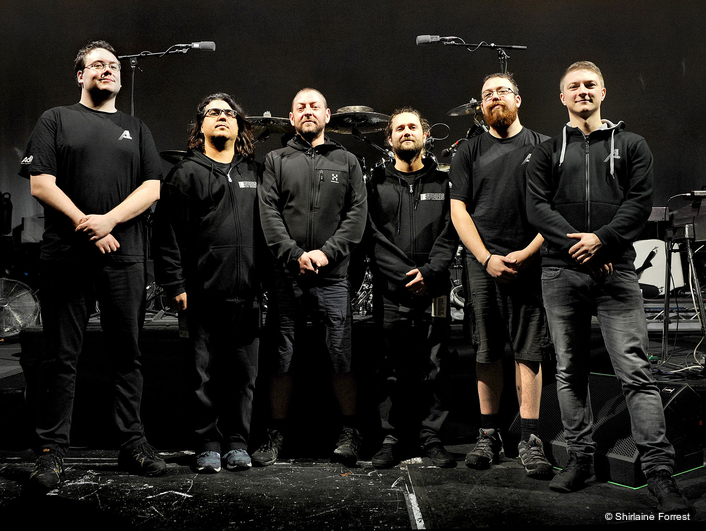 Jay's main task each day is to deliver as much sonic continuity as possible with the different shapes and sizes of the venues. Marcos, Chris and the band are in great hands with his and Marc Peers' fund of experience and knowledge and Adlib’s overall renowned spirit, approach and work ethic.

Adlib Director Phil Stoker commented, “It is great to be back working with one of the legendary bands of their time, who are still going strong. We have a great relationship with Mike Darling who trusts us to deliver on all levels for every act that he looks after and as a result we are fortunate enough to have been involved with some stunning live shows.”